Experts question the government’s stance of preparing and notifying ‘National Energy Renewable Policy’ through the bill in spite of controversy over classification of hydro power as renewable energy.

On Wednesday, April 29, a national consultation on the Draft Electricity Amendment Bill, 2020, organised online by a group of non-profit organisations, unanimously opposed the changes proposed by the Union Ministry in the bill. The draft bill seeks to introduce a semi-judiciary authority, franchisee model in power distribution and new energy renewable policy, among others.

Through the virtual platform, experts and observers have raised questions on the intent of pushing the bill amid the ongoing countrywide lockdown, while pointing out the implications of the proposed amendments. The consultation has been collectively organised by National Alliance of People’s Movements (NAPM), Delhi-based Movement for Advancing Understanding on Sustainability & Mutuality, Citizen Consumer & Civic Action Group (CAG), Chennai Environment Support Group (ESG), Madhya Pradesh-based Mehangi Bijali Abhiyan and Delhi-based Centre for Financial Accountability (CFA).

“The ruling government is using the current situation to employ devious techniques to push through amendments that subvert democracy. It favours delivery of a particular constituency that excludes everyone else,” stated Shilendra Dubey, President of All India Power Engineers’ Federation (AIPEF).

On the bill’s proposal to set up an Electricity Contract Enforcement Authority (ECEA) which would be sole adjudicating authority for matters concerning contracts between power generation companies and private distribution licensees, Dubey opined that it is an open agenda of the government for privatisation.

Tejal Kanitkar of National Institute of Advanced Studies argued that ECEA would favour the interest of private distributors over states. “States are forced into iniquitous contracts and now there is a central authority ECEA that will ensure that these contracts are being enforced even if it is not in the best interest of the states,” she said. Kanitkar added that the amendments push for failed privatisation models. “Franchisee mode is clearly cherry-picked as no private distributor is going to be interested in supplying to the rural sector due to subsidies and low revenue. But a major concern is that franchisees here are failures and could not attain break even.”

As per the draft bill, franchisee means a “person recognised as such and authorised by a distribution licensee to distribute electricity on its behalf in a particular area within his area of supply, under information to the appropriate State Commission.”

Furthermore, the speakers questioned the government’s stance of preparing and notifying ‘National Energy Renewable Policy’ through the bill in spite of controversy over classification of hydro power as renewable energy. “The idea of bringing in a national renewable policy is problematic because of the underlying issues that come along. The topic of renewable is very differently attached to hydro as factually it is not,” said Saldanha. He added that the amendment cleverly uses a very twisted language in order to include other forms of electricity generation that may not actually be renewable or in the interest of the public.

Sowmya Dutta from Movement for Advancing Understanding on Sustainability & Mutuality argued that the categorisation of hydroelectricity as a renewable resource has to be opposed with scientifically and systematically driven evidence. “We must focus on increasing the electrification of our energy basket in such a way that it battles climate change and is in consonance with environmental protection policies,” said Dutta.

When the draft bill was first proposed on April 17, the Power Ministry sought comments from stakeholders within 21 days. Subsequently, the ministry has extended the time slot for receiving comments till June 5. The bill is most likely to be introduced in the upcoming Monsoon Session of Parliament.

This article published in NewsClick can be accessed here. 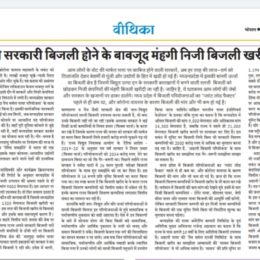