Asian Development Bank (ADB) has grown to be the third largest source of development finance in the Asia-Pacific region, next to the World Bank Group and the Japanese Government. Documents published in 2017 reveals that from a lending portfolio of just over $3 billion during the first decade, ADB has expanded its lending to $123 billion during the last 10 years.

However, the Mid-term Review (MTR) of ADB’s strategy for 2015 and 2020 have acknowledged that the Asia-Pacific region faces widening inequalities in income and access to economic and social opportunities. Increased investment in infrastructure has failed to provide inclusive growth and social protection to the vulnerable sections of the populations including the workers and women.

India had about 84 ongoing sovereign loans from ADB amounting to $11.9 billion at the end of 2015. Currently, we have about 170 active projects in the country of ADB alone. The massive Vizag-Chennai corridor, the numerous urban development projects across the country, the ReNew clean energy projects in Andhra Pradesh, Gujarat, Jharkhand, Madhya Pradesh, Telangana and Karnataka, are only a few of the 50 odd active and approved projects. Further 23 projects have been proposed to the ADB waiting for approval. These are just projects covered by ADB, adding them to the projects funded by all IFIs shows the extent of their influence in almost every sector – energy, infrastructure, health, etc. The scale of land grab, loss of livelihood, environmental destruction has been completely overlooked by both the IFIs and the government. The rampant privatisation of all the sectors, including health care, is going to affect all those who would not be able to afford health care. In such a time, holding the development banks accountable has become imperative for one’s survival with some modicum of dignity. 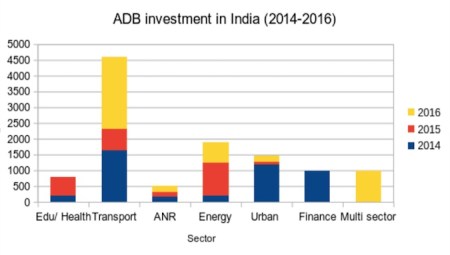 Source: Answer by the government to the parliament of India

The first week of May 2017 was marked by actions across the country against ADB and other IFIs. It coincided with ADB’s 50 years celebrations in Manila. The massive protest actions were intended to send a strong message to the ADB and other IFIs of the havoc their investments have caused. Thousands of people, in over 140 locations spread in over 21 states in India and over 80 organisations, came together to make this campaign a massive success. These protest actions are both a reminder of the reckless lending of ADB and hope to continue the struggle against the IFIs and their inequitable development model.

The coming together of so many organisations resulted in a wide range of programmes, including the public meeting, lectures, demonstrations, and human chains. Activists also made short video clips highlighting the impacts of the investments by IFIs. The protests actions raised concerns about investments of IFIs like World Bank; International Finance Corporation; Japan Bank of International Corporation (JBIC); Asia Infrastructure Investment Bank; New Development Bank; Exim Banks of Korea, United States, China among others. Many of these agencies are co-financiers, with increasing investments in the infrastructure and cross border projects, thus causing irreversible damage to the people and environment, while their policies to safeguard the harm caused by their investments are made opaque and watered down.

The actions mentioned above on the occasion of 50 years of ADB are a part of the continuous struggle of the people from all the regions that have been affected by the projects.