Cities are ever dynamic. The dynamic landscape of cities is a reflection, a miniature representation of societal interactions throughout history, static in its built forms and but constantly reinventing in contemporary ways of living. Cities are also the locus for myriad challenges: such as access to clean drinking water, housing disparities, lack of inclusive mobility, insufficient public health and education, jobs for the privileged and the unprivileged are left to find their own means, etc.

It is said that six out of ten people will live in urban areas by 2030. Clearly, cities will be jostling with rural hinterland for space and resources, much more strenuously than ever before. Given diversities of our cities, there is no one size fits all solution to these challenges. Each city has to work its own way across its particular histories and ways of living to find solutions that are appropriate to its social, cultural, economic, and climatic factors. This reality, however, appears to be lost on governments across the world who now are recklessly proposing the concept of ‘smart cities’ as a mantra to solve challenges of urbanisation.

The term ‘Smart City’ has turned into opportunity for most governments across the world to push a particularly narrow idea of urbanism. By and large, it is steeped in organising initiatives around the generation of data and employing technology as tools to attend to urban problems. ‘Smart city’, as an idea, has evolved with generous blessings from the World Bank which through its funding has ensured that the idea receives positive approbation, and thus rarely questioned as a policy proposal. Other financial institutions, local, regional and global, have rushed to follow down this path financing a variety of ‘smart city’ solutions to just about any problem. This has been of concern to several urban planners, sociologists and public health researchers, even economists and administrators. For several deeper analyses of ‘smart cities’ reveal that the mantra might not be as smart as proposed.

In many ‘smart city’ projects, it is becoming increasingly evident that the idea, by design, is of catering to the demands of a narrow elite section of the population, for which publics’ resources are channelled, probably also controlled by the elite who decide. Thereby, the massive resources allocated are not addressing genuine needs of the majority. This when city after city today is falling victim to the ravages of climate change induced consequences. In India far too many cities struggle with water shortages, then floods, and thereafter epidemics. As we speak, Hyderabad is suffering a deluge and dozens have been washed away. In such moments  one wonders how technology driven ‘smart’ solutions can save us? That when there simply is no emphasis on working with people, with communities, ground up in finding ways to not have such problems in the first place. While technology has its advantages in predicting such catastrophes, it certainly is not a cure all for all of the city’s ills if it is not deeply democratised and used appropriately. For the most part, ‘smart city’ advocates propagate that ‘smart apps’ will resolve structural failures in administration and planning which in turn perpetuate structural social, economic and environmental injustices. If only apps could solve all our problems…..

It is in this backdrop that CFA organised a webinar as part of the world without world bank campaign in collaboration with various organisations to discuss with people who are on-the-ground dealing with the realities of ‘smart city’ project from three countries of the global South: Indonesia, Philippines and India. The webinar was titled ‘World Bank’s Role In Creating Smart Cities  And It’s Socio Political Impacts In Developing Countries – Voices from the South’. The webinar recording can be accessed here. Also more about the campaign can be accessed here.

In addition to this, CFA is organising a course on smart cities to help raise awareness and get a deeper understanding of Smart Cities, its social , environmental, financial implications. It also aims to nurture discussions and debates on this very crucial subject that is changing the nature of our urban landscapes. The course is drawing speakers from across the country representing various civil society groups, academia and grass root movements and has seen a good response with nearly 90 registrations. The participants are from diverse backgrounds and also represent civil society, academia, corporate and the general public. The sessions are progressing well with rich discussions, interactions and exchange of readings. More about the course can be accessed here. 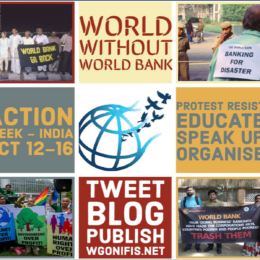