WASHINGTON, D.C. / New Delhi  – A new report released today by Friends of the Earth U.S. and Oil Change International reveals that China, Japan, and India were the top three public financiers of coal in the G20 at INR 334, INR 319, and INR 114 billion a year on average respectively. India was one of four countries that provided more support from public finance institutions for coal than oil and gas.

In total, G20 countries have been providing at least INR 5.8 trillion a year in public finance to oil, gas and coal projects since the Paris Climate Agreement. This government-backed support to fossil fuels from export credit agencies, development finance institutions, and multilateral development banks is more than three times what they are providing to clean energy. As G20 governments prepare trillions in stimulus spending in response to COVID-19, ‘Still Digging’ urges governments to stop using public money to prop up the fossil fuel industry, and instead invest in a just and sustainable recovery.

Among G20 countries, China and India have large banking systems where majority government-owned banks are common. If India’s majority government-owned banks had been included in this report, India’s total fossil fuel finance between 2016 and 2018 would have shot from INR 394 billion to INR 599 billion, with more than two-thirds of that going to coal. Including these institutions would have put India’s recent levels of support for coal nearly on par with countries that have a better-known reputation as providers of global coal finance, such as China and Japan.

“India continues to cling to coal even as it causes fatalities like the recent deaths at the Sasan coal plant,” said Kate DeAngelis, senior international policy analyst at Friends of the Earth U.S. “Fossil fuel projects are already worsening the COVID-19 crisis by generating air pollution that worsens the disease’s impacts. India and other G20 governments have an opportunity to reflect and change their financing so that it supports clean energy solutions that will not exacerbate bad health outcomes.”

“Fossil fuel corporations know their days are numbered. Their lobbyists are using the COVID-19 crisis as cover to redouble their efforts to secure the massive new government handouts they need to survive,” said Bronwen Tucker, research analyst at Oil Change International. “Government money must instead support a just transition from fossil fuels that protects workers, communities, and the climate — both at home and beyond their borders — in order to build a more resilient future. Instead of bankrolling another major crisis — climate change — our governments should invest in the future.”

Utilizing data from Oil Change International’s Shift the Subsidies database, the report analyzes support coming from the export credit agencies (ECAs) and development finance institutions (DFIs), as well as the multilateral development banks (MDBs) that G20 countries control. It does not include direct subsidies for the industry through tax and fiscal subsidies which are an estimated additional $80 billion a year. Some of the key findings include:

Friends of the Earth fights to protect our environment and create a healthy and just world. We speak truth to power and expose those who endanger people and the planet. Our campaigns work to hold politicians and corporations accountable, transform our economic systems, protect our forests and oceans, and revolutionize our food & agriculture systems.

Oil Change International is a research, communication, and advocacy organization focused on exposing the true costs of fossil fuels and facilitating the coming transition towards clean energy. 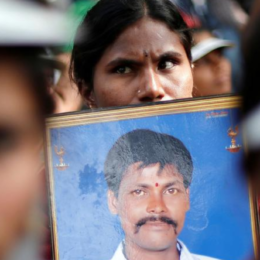