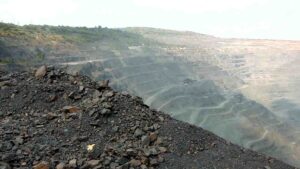 As many as 70 people’s movements, trade unions and civil society organisations (CSOs)* have asserted that India’s biggest ever coal mine auction, announced in November last year “will aggravate climate crisis” and “is against India’s climate pledges.”
Stating that “coal burning is also the biggest source of air pollution in India, which causes premature death of about 17 lakh Indians every year”, the signatories have demanded in a statement that the Government of India (GoI) should review “all its economic policies to bring them in line with larger social goals and its own environmental and climate commitments.”

The central government opening the biggest new coal mine auction, announced in November 2022, is a mockery of the Prime Minister’s own climate announcements at climate change summits, and an invitation to worsening the climate crisis.
In early November 2022, Union Finance Minister Nirmala Sitharaman launched India’s biggest ever coalmine auction, comprising 141 mines in as many as 11 states with a cumulative peak rate capacity (PRC) of 305 million ton (MT).

The Indian government announced this just before the opening of the important Climate Change summit CoP-27 in Sharm El Sheikh, Egypt, which was being called “The Implementation Summit”. The announcement is likely to further exacerbate the climate change crisis that the UN Secretary General voiced as his grave concern at the opening of the CoP-27 – “We are on a highway to climate hell with our foot still on the accelerator”.

At last year’s Climate Change summit at Glasgow, the CoP-26, and the Indian government offered “pancha mrit” to a world facing climate chaos. As one of the “amrits”, the government promised that India will cut its projected carbon dioxide emissions till 2030, by one Gigatons or 100 crore tons. The opening up 141 new coal mines, Coal being the most CO2 emissions intensive source of energy, is in direct contradiction with India’s commitments at COP-26

While India’s need for more energy is legitimate and well recognised around the world, today the country is in an energy-economy where new coal power plants produce electricity at a much higher rate per MWh than new solar or wind power plants. On top of that, coal burning is also the biggest source of air pollution in India, which causes premature death of about 17 lakh (1.7 million) Indians every year and puts a severe burden of diseases to many more millions, as per global studies. Additionally, coal is the most water intensive energy source which will worsen the critical water crisis that many regions of India faces, While the whole world is facing a deepening Climate Change crisis, with India facing six massive heat-waves and over 130,000 forest and other fires last summer, also losing its crucial wheat production by a significant percentage, along with millions of working class people being the hardest hit. China and Europe too faced unprecedented long drawn heat-waves till recently. Pakistan got devastated by a super heavy rainfall and flood of “biblical proportions” with one-third of the country going underwater. Repeated strong cyclones hitting India’s coastal states, Pacific island nations and the US Gulf of Mexico coasts in the span of 8-9 months. The list of stronger climate change driven disasters keeps increasing.

In the global stages of Climate and environmental actions, like the UNFCCC climate change conferences or the UNEP conference on controlling plastics, our Indian government has announced some limited measures to combat climate change. However, at home, the actions of the government are exactly the opposite, not only making a mockery of the Indian Government’s climate action pledges, but also committing billions of poorer and working-class people to face increasingly severe climate change impacts and pushing the world towards the dreaded climate tipping points that scientists are repeatedly warning about.

Coal burning is the biggest source of air pollution, which causes premature death of about 17 lakh Indians every year

As socially and ecologically conscious groups and citizens concerned about well-being of Indian people and global ecological safety, we demand that —
1. The Government of India scrap this unnecessary and potentially very harmful large new coal block auction forthwith, as this will lead to,

2. We sincerely appreciate the Government of India delegation’s proposal at the UNFCCC climate change summit CoP-27, for a “phaseout of all fossil fuels”, and hope that the Government of India will live up to its own proposal and start the process at home first. This demands not opening any new fossil fuel exploration processes, and planning a step by step decommissioning of the most polluting fossil fuel infrastructure first, followed by other more carbon-intensive ones. Coal being the most carbon and air pollution intensive among all fossil fuels, its phase out should receive greater attention.

3. We also demand that the GoI reviews all its economic policies to bring them in line with larger social goals and its own environmental and climate commitments — both internationally and at home. In that connection, related pushes for coal bed methane, coal gasification etc. should be stopped or at least downgraded right away.

This article was originally published in Counterview and can be read here.