The report seems to only focus on guilt tripping the judiciary by mechanistically enumerating immediate economic losses owing to the stalling and closures effected by rulings. It is symptomatic of the urge of the government to put profit over people. 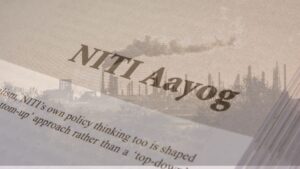 “Connecting with nature means to connect with ourselves,” said Prime Minister Narendra Modi in his address on World Environment Day, 2017.

At the world stage we heard him lecturing how “today’s need is for mindful and deliberate utilisation instead of mindless and destructive consumption.” The elixir of wisdom is moving, but such grandstanding is backed by precious little. In fact, the track record of his government has been dismal when it comes to concerns about environment.

It is a time when concerns around climate change and environmental degradation are at the centre-stage of policy making. Much of what is said and done about it by world leaders is of course hogwash and lip service. But going by this NITI Aayog-funded report, we are in fact on a reverse gear.

Even a crash course in environmental discourse suffices for one to fathom that we have long crossed the phase of prioritising immediate economic benefits over long term environmental damage. And yet the study conducted by the Consumer Unity and Trust Society (CUTS) deliberately obsesses over the immediate economic costs, “losses to government exchequer”, “rise in public debt”, impact on “project cost” and “time overrun”, debt to equity ratio, and purported loss of jobs.

It does this by taking five case studies wherein SC and NGT rulings have either stalled or delayed various environmentally debilitating projects. These include the controversial Mopa Airport project and the illegal iron ore mining in the ecologically sensitive Western Ghats of Goa; the fatefully polluting Sterlite Copper Plant in Thoothukudi, Tamil Nadu; the illegal sand mining case in Uttar Pradesh, and the construction ban in Delhi National Capital Region.

In each of these cases there were sound logic and reason behind what the government labels as excessive “judicial activism” that stalled the projects or mining. In the Mopa airport case, for instance, the Supreme Court clearly points towards deliberate flouting or concealment in the EIA report of the impact of such a massive infrastructure project on forests, drainage, wild life and local communities. The developmental exigencies clearly superseded the concern for nature.

To quote from the judgement:

“[I]n the present case, there has thus been a patent failure on part of the project proponent to make mandatory disclosures stipulated in Form 1 under the 2006 notification, that must have consequences in law. There can be no gambles with the environment: a ‘heads I win, tails you lose’ approach is simply unacceptable; unacceptable if we are to preserve environmental governance under the rule of law.”

The Sterlite copper plant in Thoothukudi had been opposed by locals for years owing to the environmental hazards leading to health harms such as chronic fatigue, asthma and respiratory diseases, ear-nose-throat (ENT) disorders, menstrual disorders and much more. It was finally closed only after thirteen protestors were martyred in the police firing in May 2018. The Supreme court upheld the state government’s decision of closure.

Then again, in the sand mining case again, the NGT took cognisance of the threat it poses to the flow of the river, forests upon river bank and most seriously to the environment of these areas. Once again, to quote from its ruling:

“Stringent regulation of mining of minerals is required. Due care, caution and prevention should be taken to ensure that no degradation of environment takes place. The objection that there being stagnation as well as delay in grant of EC is a mere administrative issue. Inconvenience is normally never a ground for changing the interpretation of law or reading words into a statute.”

The report in each of these cases however seemed to only focus on guilt tripping the judiciary by mechanistically enumerating the immediate economic losses owing to the stalling and closures effected by the above rulings. Much in line with governments’ single-minded prioritisation of “ease of business” over the unease of the people, the report, in bold, highlighted the Rs 15000 crore that the industry lost in revenue owing to the above judgments. It said that just the above five cases led to a loss of revenue amounting to around Rs 8,000 crores, which it said if the government were to receive and invest as capital expenditure, “could have resulted in economic impact of more than Rs 20,000 crores.”

Using phrases like “human-centricity of economic development,” the report calls for a “balanced thinking in judicial decision-making”.

Now, it is quite elementary in environmental discourse today that while it is easier to put a number on profit and loss, it is rather difficult to undertake valuation of a catchment area, of a rainforest, of air quality or say of a wetland. Again, we cannot put a number on the unseen costs in terms of the damages caused to the lungs of the generations yet to be born. Devoid of such concerns, the report reeks of shortsightedness and is symptomatic of the urge of the government to put profit over people.

The report claims to promote an “evidence-based approach” and supposedly seeks “equal consideration to equity, environment and economy” while finding possible remedies. And yet, the report itself cursorily mentions that in the course of the study CUTS failed to engage with “different and diverse perspectives” that of environmentalists, activists, village level administrators and so on.

It is rather appalling that the government funded a report solely aimed at dissing the courts and the NGT without even making a pretence of consulting the advocates for nature, or the affected people. So much for the PM’s wisdom of “connecting with nature”.

A Reporter’s Collective investigation in fact shows how the thrust of the report from the very outset was to highlight how adverse judgments were detrimental to business. CUTS International, the research organisation that prepared the report had been in communication with the then CEO of NITI Aayog Amitabh Kant. And his personal disgruntlement towards the Supreme Court judgment on the Mopa airport seemed to have its bearing on the report.

So, while the PM was faking climate concerns at the world stage, his premier policy think tank was only interested about the investment climate.

In the opinion of senior journalist Prasanna Mohanty, this government from 2014 itself was bent upon giving rapid environmental clearances to industrial and infrastructure projects, undermining several environmental protections. Just in the first 50 days in office, the government cleared five projects, two of which were highly polluting coal-based power plants.

From attempting to bypass the mandatory EIA to diluting it, from attempting to give ex-post-fact clearance to projects already under construction to going after climate activists – the government has on several occasion duelled with the courts to bulldoze all “obstacles” in the path of business.

Research today unambiguously points towards the fact that emission increases astronomically with concentration of wealth.

The richest 1% in the world are by far the fastest-growing source of emissions.

And yet the trajectory of the present government has been such that even in the midst of the pandemic when millions were pushed into poverty, the number of billionaires have increased from 102 to 142. Today in India 1% has hold over 58% of the individual private wealth in the country.

So, while this NITI Aayog commissioned report laments about the loss of Rs 20,000 crores due to these “adverse judgments”, it is important to remind the public that the same government did not bat an eyelid while giving corporate tax rebates that led to a loss of Rs 1.45 lakh crore per year to the government exchequer.

And again, it is important to point towards the fact that the government can easily raise Rs 17.8 lakh crore rupees per year to spend on universal social rights and employment with a minimal wealth tax of 2% and inheritance tax of 50% on the richest 1%.

So, even as the report is couched in the language of public loss and human cost of stalling development projects, the real concern of the government has nothing to do with climate or public welfare. Its only priority is “ease of business”.

The original article published in The Wire can be accessed here.