Replacing regular jobs with short-term contractual ones will not only compromise professionalism in the armed forces and national security, but it will also pose a serious threat to social order already torn asunder by politics of everyday hate and violence against Muslims and others. 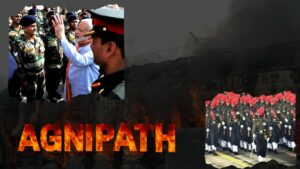 That the prospects of a secure employment drive recruitments to armed forces, particularly to the Indian Army, is evident from the current spate of train burning and stone-pelting across several states, if any was needed, notwithstanding what General VK Singh (retd), former Army chief and a junior minister at the Centre, says now.

It also reflects how severe the job crisis is and how callous the government has been to admit and address it in the past few years – after the PLFS of 2017-18 showed the unemployment rate (UR) had touched a 45-year high at 6.1% and that “for the first time in India’s history” 9 million jobs had been lost between 2011-12 and 2017-18.

For the past two years, millions of youths have been preparing for recruitment to the armed forces to complete. Having completed medical and physical tests, they were expecting written tests to be held any time now when the “Agnipath” scheme hit them. It is short-term contractual recruitment, for four years, instead of regular recruitment for 17 years, at the end of which they get a pension and lifelong healthcare for their family. The “Agnipath” scheme and “Agniveer” moniker that comes with it may sound grand, but it proposes to be a “no rank, no pension” position and 75% of them would be laid off at the end of four years.

The attack on the Railways’ properties in January this year, in response to various omissions and commissions in the recruitment process – which remains incomplete since 2019 – was also an expression of the anger and frustration of youths waiting for employment.

The anger is palpable for several reasons.

The government’s excuse that the pandemic prevented recruitment to armed forces in the past two years doesn’t wash, especially when the same government indulged in a month-long election campaign in West Bengal and also a month-long Kumbh mela at Haridwar amidst the devastating second pandemic wave in 2021.

Taking the pandemic as an excuse, recruitment to existing vacancies has been stalled while the job crisis worsens. Recently, the Prime Minister announced to fill 1 million jobs in the central government ministries and departments which have been vacant for years. Why should such a huge vacancy be allowed to exist amidst the job crisis?

Even more galling is the government’s attitude. It has never officially admitted to the job crisis and didn’t make policies and plans to address it. On the contrary, it has been actively trying to hide the truth and paint a shiny picture.

While it is known that the pandemic worsened the job crisis and derailed the economy, the government systematically falsified data to show that the state of employment improved during the very period.

In effect, what the two PLFS reports say is that there was no job loss or job crisis due to the pandemic, rather, more people joined the workforce (higher WPR), and more people got jobs (higher LFPR) and unemployment fell down (lower UR).

The “Agnipath” is a continuation of the same head-in-the-sand approach to angst and anxieties among the masses fighting poverty and hunger amidst a job crisis and economic slowdown.

Why protest against the “Agnipath” scheme?

Armed forces are a good source of employment in an impoverished country with massive unemployment and under-employment. Most recruits belong to backward classes and come from rural areas. The PLFS of 2020-21 indicates that 51.5% of urban men may have migrated to rural areas during the pandemic. This would have worsened the frustration and anger when their hopes were dashed with the announcement of “Agnipath”.

The “Agnipath” is billed as a “transformative reform”. It would prove transformative in the negative sense if allowed to go ahead. It replaces regular recruitments to the armed force with a short-term four-year contract – much like the neoliberal or corporate style “hire-and-fire”. Those who are hired will get a monthly in-hand salary of Rs 21,000-28,000 per month with no pension and no post-retirement healthcare. True, they will be laid off with a tax-free corpus of Rs 11.7 lakh after four years – a year short of when the eligibility for gratuity kicks in – and 25% of them would be absorbed in other paramilitary and police forces but with a break in service – which would reduce their social security covers proportionately.

Besides, “Agnipath” marks a paradigm shift in the way national security and soldiering are viewed – non-professionally.

The “Agnipath” scheme is driven by financial constraints. The salary and pension bills in the armed forces form a bulk of the budget and are growing. In FY22, for instance, the expenditure on salaries and pensions formed 54%, the largest portion, of the defence budget.

But national security can’t be compromised or armed forces can’t be transformed into non-professional, contractual soldiering. That would be suicidal. Many defence experts and retired armed force personnel have already made it clear that the “Agnipath” scheme is a short period to imbibe the ethos, produce professional soldiers and develop skillsets needed to keep a modern armed force battle-ready.

Major General (retd) GG Dwivedi has called the scheme deeply flawed, dangerous for professionalism in the armed forces and, by extension, for national security, even after taking into account the financial constraint that drives it. He writes: ‘The tendency to replicate the corporate model which devolves on the culture of ‘hire and fire’ or ‘use and throw’ defies the fundamental tenets of the armed forces and impinges on the solemn code of ‘Honour, Loyalty, Identity.’

General Dwivedi draws attention to the fact that such short-term conscriptions or contractual soldiers – which he describes as “tourist soldiering” – have already been proved bad the world over. It hurt the US in the Vietnam and Afghan wars, poses a security threat in Israel and hurt Ukraine in the ongoing war with Russia. India has enough unemployed youth aspiring to join the armed forces, unlike all these countries, obviating the need for contractual soldiering.

Defence expert Sushant Singh points to another drawback. He argues that six-month of training is not only too short to develop professional capacities and experience in the Army, but it also has virtually no use in the Navy and Air Force where the technical needs call for specialised roles and extensive training, in absence of which operational serviceability of modern weapons and platforms would be compromised.

Threat to social peace and harmony

Not just a weakened defence force, “Agnipath” presents another big threat – to society.

Sushant Singh warns of the dangerous consequences of the yearly influx of thousands of young men capable of inflicting violence in an organised manner (75% of “Agniveers”) on society. Pointing out that the economy is weak and incapable of providing jobs to them, making it difficult to absorb them “in a smooth and peaceful manner”. And then the country is in the grip of majoritarian violence, with Muslims being the prime targets.

He writes: “With institutions of the state largely failing to perform their constitutional roles, the state has ceded its monopoly over violence to Hindutva groups. The demobilised short-term contractual soldiers could provide a major recruiting pool for such groups who wish to use violent means to pursue their ideological goals. The consequences of such an eventuality will be catastrophic.”

There are precedents, he notes.

Quoting a 2012 paper, “Does Combat experience foster Organizational Skill? Evidence from Ethnic Cleansing during the Partition of India” by Steven Wilkinson and Saumitra Jha, he writes that the partition riots of 1947 saw the World War II veterans “heavily involved” in organising ethnic cleansing: “The most violent ethnic cleansing occurred when members of the majority community had gained combat experience as soldiers and the minority community was unorganised”.

Such findings are supported by other research, Singh writes. The ethnic cleansing of Yugoslavia and Rwanda depended on the availability and skills of specialists in violence, particularly where the state’s coercive power had been weakened.

“These findings hold an important lesson for today’s India, where the government has ceded the state’s monopoly over violence to Hindutva mobs, abetted by the institutional infirmity of the judiciary, police, bureaucracy and the media”, he adds.

It is not difficult to imagine such a scenario, given that the Hindutva Parivar has spawned many private militant groups for achieving their Hindu Rashtra (Hindu majoritarian project) objective.

The Modi government is known for top-down, arbitrary policymaking sans consultation, evidence and democratic checks and balances. The “Agnipath” scheme is the latest on the list.

There was no discussion on it inside or outside the Parliament – more worrying when it has serious “transformative” consequences. Defence forces apparently accepted a political decision imposed on them without due process and not knowing what the consequences would be for the professionalism of armed forces, national security or other implications.

Singh has written that defence services had proposed a pilot project (5,000 soldiers for five years) to study the effect before the scheme is implemented, but it was shot down by the political leadership. That the defence services accepted political command is rather unfortunate.

That it was ill-thought is evident from the change of eligibility criterion – from 21 to 23 years, in response to the violence. The Home Ministry jumped in to announce 10% reservations for “Agniveers” in central paramilitary forces and Assam Rifles. To quell the protest, defence services have announced to immediately notify and begin the recruitment process.

India went through such panic during the demonetisation of 2016, as well as the pandemic lockdown – both announced without consultations and due processes. Both caused immense avoidable pain to the people and economy.

The propensity to create man-made disasters should have been abjured after these two experiences, but the government seems immune to lessons.