The Asian Infrastructure Investment Bank (AIIB) is holding its first ever annual meeting outside of Asia on 12-13 July in Europe – a continent that has just suffered June temperatures more than 6-10C above average in many countries, including in France, which experienced its hottest day on record: 45.9C.

As the AIIB gathers in Luxembourg, worried citizens are putting the heat back on the Chinese-led bank for its questionable record on climate change.

Activists from all over the world are planning demonstrations, hosted by school strikers, Youth for Climate, local organisations Laika and Etika, Extinction Rebellion and others, outside the AIIB’s AGM conference venue in Luxembourg. International climate coalition, the Big Shift Campaign, has launched an online campaign for the bank to exit fossils and there is grassroots resistance to the fossil fuel projects it is funding.

This is not how it was meant to be for the AIIB.

Founded just after the Paris Agreement, the bank styled itself a “lean, clean and green” climate leader. It published a new Environmental and Social Framework (ESF) to “prioritise investments promoting greenhouse gas emission neutral and climate resilient infrastructure, including actions for reducing emissions, climate-proofing, and promotion of renewable energy”. 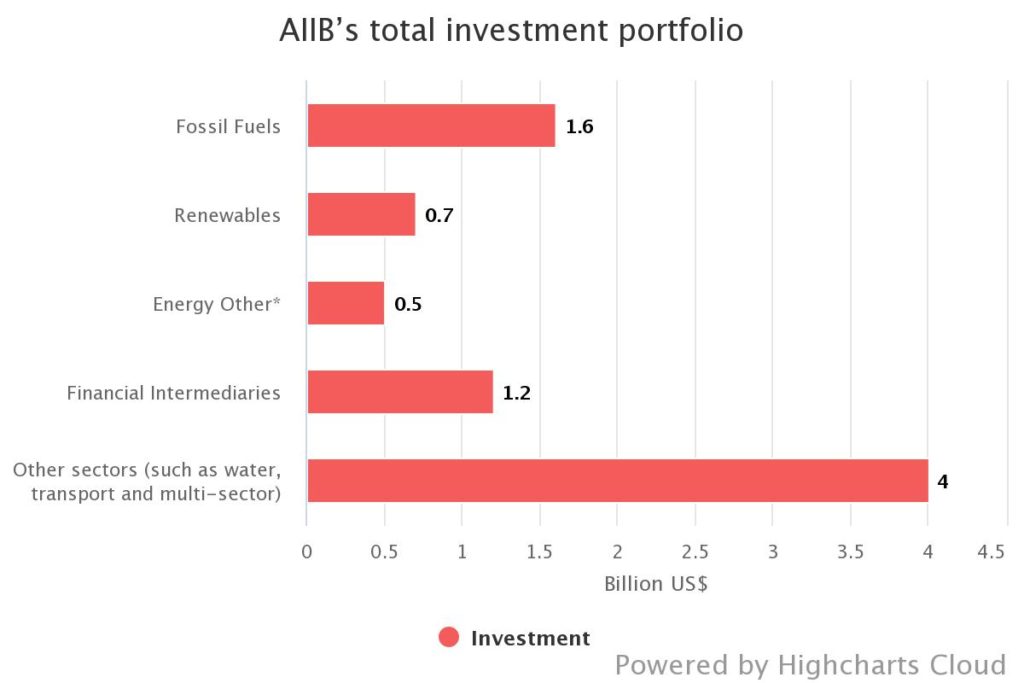 * ‘Energy other’ includes projects, such as transmission and distribution, where the fuel source is not defined.
Source: AIIB Approved Projects, June 2019

But behind the rhetoric, the AIIB’s investments are telling a very different story. Of its US$8 billion investments to date, 20% have gone into fossil fuels against just 8% for renewables. In its energy portfolio alone, fully 57% has backed fossils – more than double the amount for renewables (the rest is for energy investments where the fuel sources are not defined).

And these figures relate only to the AIIB’s direct lending.

Civil society group, Bank Information Center Europe (BIC Europe), has looked into the AIIB’s indirect lending through financial intermediaries, like infrastructure and private equity funds. The AIIB currently channels 15% of its total spending via this risky “hands-off” type of lending. BIC Europe warned the AIIB this could result in it financing fossil fuels through the back door, which is exactly what is happening. In 2017, the AIIB invested US$150 million into a financial intermediary called the IFC Emerging Asia Fund, whose clients include Shwe Taung Cement in Myanmar, which is expanding a cement plant and coal mine that will double its greenhouse gas emissions, and Summit Power in Bangladesh, whose energy portfolio is 100% fossil fuelled.

BIC Europe’s new report, Dangerous Distractions, tests the AIIB’s climate credentials by examining its energy investments in Bangladesh, one of the most climate-vulnerable countries in the world. Of its US$405 million direct energy investments in the country, not one cent has gone into renewable energy. Instead, both direct and indirect investments have backed greenfield gas plants and heavy fuel oil power-generation.

The AIIB argues that gas is a vital step in Bangladesh’s transition to a lower carbon future and, besides that, it can only fund whatever proposals the government brings to the table. However, Bangladesh has ambitious commitments to renewables generation and energy access. As a “green” bank the AIIB should have looked to support these, as others like the World Bank and Asian Development Bank have done; but its bias for gas seems to be its default option in Bangladesh. This is a high-risk investment strategy. According to energy campaign group Oil Change International: “The coal, oil and fossil gas in currently-producing and under-construction projects are enough to exceed climate goals. Opening new fossil gas fields is inconsistent with the Paris goals.”

Perhaps the answer lies in the confusing signals the AIIB is sending to borrower governments. Though AIIB President Jin Liqun has insisted “There is no coal in our pipeline”, his senior energy advisor, David Morgado is touring Asia saying “the door is still open” to coal. The attraction of gas for the AIIB meanwhile, is set out in a joint publication between the AIIB and the Economist Intelligence Unit, which notes: “Renewables projects also tend to have a smaller deal size, which can be less attractive to lenders given the high fixed cost of project due diligence”. As Oxfam points out, rather than the fault lying with there being no demand from borrower countries, “The question might be whether [international financial institutions] choose to meet – and encourage – this demand.”

Three and a half years after AIIB’s creation, patience is beginning to wear thin among civil society groups that had hoped the AIIB could do differently to the traditional multilateral develpment banks, which have heavy fossil fuel legacies and a business-as-usual approach.

Hasan Mehedi of the Coastal Livelihood and Environmental Action Network in Bangladesh is travelling to Luxembourg to highlight communities’ concerns about the AIIB’s Bhola gas plant and other fossil fuel projects. “The coastal zone of Bangladesh is already facing adverse impacts from climate change. The AIIB’s dirty investments are aggravating and accelerating these climate impacts.”

Speaking to demonstrators at Friday’s protest in the Place de L’Europe outside the AGM convention centre, Anuradha Munshi from the Centre for Financial Accountability in India, will describe how the AIIB is “fomenting climate change”. She testifies to “the worst water crisis and heat wave India has ever faced leaving marginalised communities on the verge of death and starvation.”

Civil society groups attending the Luxembourg AGM are calling on the AIIB to develop a climate action plan, as the World Bank and Asian Development Bank have done, to ensure its rhetoric on climate is translated into action. “The AIIB must commit to a time-bound plan to phase out all fossil fuel investments, including gas, and this must happen now,” argues Rayyan Hassan, director of the NGO Forum on the Asian Development Bank.

“The whole world will judge us by how we perform, not by what we claim,” President Jin told journalists last year. As protesters gather in the Place de l’Europe, Jin’s words may just come back to haunt him.

The article, originally published on the Chinadialogue.net, can be accessed here.

Coveted IMF-WB Spring meetings conclude with a vow to fiddle; MC12 round the corner