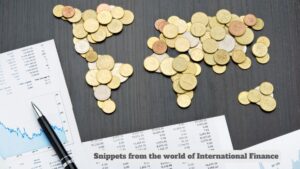 Snippets from the world of International Finance

A year ago, we welcomed 2021 with a sense of optimism that the international community will rise to the challenge of ensuring equal vaccine access to all countries, but then the second wave of COVID-19 brought to the fore the colossal failure of our political and economic systems.

The year 2022 is not very far away from this bleakness. While the poorest of the world remain stuck in the cruel cycle of exploitation, deprivation and inaccessibility, the wealthiest of the world are moving further on the divergence line, even sending friends to Mars! Oxfam’s January 2022 briefing paper, Inequality Kills, estimates that the world’s 10 richest men have doubled their fortunes, while over 160 million people are projected to have been pushed into poverty. While these figures can help us do a lot of mental gymnastics, the matter of fact remains that our policy systems are rigged against the poor and other vulnerable racial, ethnic, caste and gender identities.

This year also marks the midpoint for meeting the 2030 Sustainable Development  Goals. Not that anything big was ever expected out of these benchmarks but the existence of colonial divisions of power is making the international community realise that it is far away from an economic justice narrative and even farther from creating just, healthy, or happy societies.

A new collective report by the Coalition of Human Rights in Development ‘Missing Receipts’ has been released, which looks at the role that international financial institutions are playing in the COVID-19 response and their failings. Similar concerns have been raised previously about how the MDBs have treated pandemic as an opportunity. This report presents brilliant evidence that has materialised over the last two and half years. Built on several global and national level case studies. The report highlights several structural issues such as corruption, conditionalities, lack of participation from the grassroots, mounting debt among other issues. Among other examples in the report, the AIIB and ADB supported the government life insurance program for doctors who lost their lives due to COVID-19. Apart from being touted as insufficient, the program was inaccessible with active suppression of information on part of the government, says the report. Also, supported by the duo was a cash transfer program for the women that fell into the cracks because of women not having bank accounts in their name. Similar was the fate of a grain distribution program where the amount of money spent was significantly inflated. The common thread in this disposition was the lack of transparency and accountability on the part of the last mile distributor and the absence of monitoring and evaluation reports from the funders.

From the Multilateral Development Banks (MDBs)

The Asian Infrastructure Investment Bank’s Board of Directors has appointed Urjit Patel to the position of Vice President for Investment Operations for South Asia, the Pacific Islands and the South-East Asia Region. Patel was the Governor of the Reserve Bank of India from September 2016 to December 2018. This was also a very tumultuous period in the history of RBI as several decisions like demonetization, implementation of GST were taken. He has also served as former Chair of the Governing Body of the National Institute of Public Finance and Policy, New Delhi. He will be succeeding Dr D.J. Pandian. This change in the Senior Management Team will be effective from Feb. 1, 2022.

Another January blog from AIIB expects the uneven economic recovery to widen the infrastructure financing gap in developing and emerging Asia this year. Authors of the blog predict that the Central banks might go for faster rate increases (leading to a scarcity of low-cost liquidity), leading to an increasing appetite to shift more assets into infrastructure as a hedge against inflation, provided the assets are well structured. However, the investments for enhanced digital connectivity are expected to increase as more people work remotely.

The AIIB is also updating its Energy Sector Strategy and is organizing a session for civil society organizations to share updates regarding the process of public consultation and to partake in the process. It is scheduled for 25th February, 2022. Interested groups and individuals can register here. This session is being organized in the backdrop of repeated unmet requests from CSOs or any public disclosure of any approach paper guiding the overall update process or Complaints-resolution, Evaluation and Integrity Unit’s review of the energy sector portfolio or update timelines (especially for public comments).

At the level of projects, India: West Bengal Electricity Distribution Grid Modernization Project and India: Responsive COVID-19 Vaccines for Recovery Project have been approved by AIIB this January, each fetching USD 135 million and USD 500 million, respectively, while no new project has been proposed this month.

At the Asian Development Bank, no new project has been approved or proposed this month.  However, ADB is reviewing its Safeguard Policy and has been conducting the stakeholder engagement in three phases. Phase 1 was about the Initial consultation and stakeholder outreach and was completed between June 2020 and May 2021. Currently, the consultations are in Phase 2 where the ADB is presenting the findings of different analytical studies undertaken by the bank. This phase began in June 2021 and will continue until June 2022. While Phase 3 will end only in March 2023, it would be interesting to see how the recommendations and suggestions form these consultations are included in the final Working Paper that is scheduled to be released in November 2022. For those interested, the analytical studies can be found here.

The January 2022 update of the World Bank’s flagship, Global Economic Prospects predicts that output in emerging markets and developing economies will remain markedly below pre-pandemic trends over the forecast horizon largely due to various downside risks, including new COVID-19 outbreaks, the possibility of de-anchored inflation expectations, and financial stress in a context of record-high debt levels. In contrast to the demands for debt restructuring, the report also concludes that debt restructuring will be more difficult to achieve than in the past. Social tensions may heighten as a result of the increase in inequality caused by the pandemic.

Now in its 48th year, the World Bank has also released the International Debt Statistics (IDS) 2022. This year, the dataset contains the actual debt service deferred in 2020 by each bilateral creditor and the projected monthly debt-service payments owed to all bilateral creditors for the year 2021, basically expanding the 2021 dataset on lending by creditor countries and multilateral institutions to LICs and MICs. From 2020 to this year, the database also contains average lending terms like commitment amount, maturity, grace period, interest rate, and grant element by creditor country and the currency composition of debt stock.

From the Fund: Forecasts abound, all inane at the end

Keeping the call for reforms aside, in order to address the crisis of multilateralism, the International Monetary Fund announced the formation of the Resilience and Sustainability Trust (RST) in October 2021. However,  an IMF blog this month dropped in the prospective features of the RST which is to be funded by the unused Special Drawing Rights of the rich countries so as to be able to provide concessional loans to low and middle-income countries for long term structural reform. This trust is aimed to be made functional before the end of this year with major decisions to be taken at the Spring and Autumn Meetings. Concerns are being raised about the Fund getting into arenas where it has limited expertise like climate change, pandemic preparedness etc. This might open doors to austerity measures and more debt leading to further interference in country-level policymaking. Moreover, the IMF seems to have developed a climate reform framework for the RST without any consultation with Civil Society Organizations. An introduction to some of these impending issues w.r.t IMF and G20 deliberations can be found in this briefing paper.

The IMF’s latest World Economic Outlook this month, anticipates that while Omicron will weigh on activities in the first quarter of 2022 it will fade starting in the second quarter. The outlook also projects global growth this year at 4.4 per cent, 0.5 percentage points lower than previously forecast, mainly because of downgrades for the United States and China. The inflation expectations are to subside only in 2023, while this year the world is expected to see price pressures for a longer period. However, it must be noted that the updates and revisions for India are presented on a fiscal year basis, with FY 2021/2022 starting in April 2021. For the January 2022 WEO Update, India’s growth projections are 8.7 per cent in

2022 and 6.6 per cent in 2023 based on the calendar year. In the full report, the prospects are marked up expecting improvements to credit growth, spilling to investment and consumption. Now, this forecast might appear antediluvian to those who have been closely observing the Indian economy and it all boils down to how these growth figures realistically translate to the last mile.

Also, the latest inflation data from the US Federal Reserve on January 26th signalled that the central bank is ready to raise interest rates in a bid to tamp down inflation which rose at the fastest pace in nearly 40 years in December 2021. The hike would be the first time the American central bank has increased its benchmark lending rate in over three years. This is expected to happen in March 2022. The biggest problem is the surge experienced in the US consumer prices, which might damage the economy once entrenched.

That’s all for this month’s dispatch, we will be back again next month. Chuckles till then!

Note: These snippets are an attempt at providing a monthly roundup of the happenings in the International Finance arena. Do you have suggestions for us to make this better? We would love to hear from you. Please send them to us using this form.