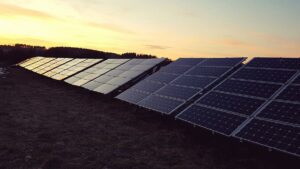 In 2014, Ministry of New and Renewable Energy, launched the Scheme for Development of Solar Parks and Ultra Mega Solar Power Projects to meet some of the targets for building large-scale solar-power plants in India. Under this scheme, there are 34 large-scale, grid-connected solar parks of total capacity 20 GW commissioned by 2022.

One of the first projects that was commissioned under this scheme is the Rewa Ultra Mega Solar Power Project. Located in Gurh tehsil of Rewa district in Madhya Pradesh, the power plant has been set up on close to 1590 acres of forest and private land acquired from villages of Badwaar, Barsaita, Barsaita Desh, Itaar and Ramnagar of Gurh tehsil. The solar power plant has installed capacity to produce 750 MW of power. The project has been supported by World Bank and International Finance Corporation. World Bank through its funding of US$ 100 million to help India increase its power generation capacity through cleaner, renewable energy sources and IFC is undertaking transaction advisory projects with government agencies like New and Renewable Energy Department (NRED), Government of Madhya Pradesh and SECI in identifying and structuring renewable energy projects across various states in the country.

Renewable mega solar projects have been claimed as projects with no or minimal environmental and social impacts, but Rewa Mega Solar project has a different story to tell. Mega Solar projects require significant land to be built. In countries like India, where land itself is a complex issue and intrinsically linked to life and livelihoods, any projects where large land masses are acquired result in massive social and environmental disasters. For the Rewa project, the local sources informed that close to100 acres of farming land of around 200 families had been acquired for the solar power project. It has been said that among them, 12 families were from the tribal community. After land acquisition, these tribal families have become landless. They gave up their land on the promise of compensation and a job in the power project. They got compensation for their land, but did not get jobs. Now, once the money has been spent, these families are forced to migrate from their villages to nearby places in search of work.

What make the matters worse for the local people is that land parcels/ agricultural lands of some villagers have been surrounded inside the project site. Residents also said that acres of land belonging to around 20 families have been trapped within the project area. A boundary wall has been constructed around the project site that has effectively blocked the earlier direct paths to reach their agricultural lands. Locals explained their plight and told where earlier they could reach their lands after 2-3 kilometre walk, now it takes them a travel of around 14 – 15-kilometre distance to reach their lands. Regular farming in those lands has become quite difficult for them now.

The project also impacted the pastoral community and the cattle. Cruelty on cattle has increased in these villages. Earlier, cattle and other animals of the surrounding 20 villages grazed in these more than 1000 acres of government and private lands. During sowing season, local farmers made temporary shelter for their cattle in this area. After the acquisition of these lands for the power plant, people have been forced to leave their animals on the roads. They cannot go to the grazing lands, they look for fodder and end up entering cropped fields around the villages. Since such cattle would destroy their crops, farmers have started tying their tongue and mouth together using metal wires. This has led to many cattle dying. Few animal welfare societies came to the village and rescued dozens of cattle. However, this does not appear to be a solution to tackle this complex situation. Local people blamed the project for this cruelty.

Apart from these there are serious issues regarding the water usage. Mega solar projects require huge amounts of water for cleaning and maintenance. The local population being dependent on groundwater for daily personal consumption and agriculture. The ESIA of the project states that the extraction of the groundwater for the project activities can have an impact on the availability of the groundwater resources. These are serious concerns and need to be looked into to protect the lives of local people.

Large solar parks form a considerable part of India’s ambitious renewable energy programme to meet the goal of 175 GW of renewable energy well before the target of 2022 and are being pursued with little regard to social and environmental impacts of these projects. From getting relaxation for environmental clearances to finding easy financing through financial and technical support of international financial institutions, there are hardly any checks and balances for getting a go ahead for these mega projects. There is an underlying assumption that anything renewable has no or minimal impacts which is not based on rigorous environmental or social evidence.

Despite, environmentalists and activists warning of against large renewables falling in the same trap as fossil fuel based large energy projects, not much effort has been made to understand the social and environmental impacts and economic viability of these large solar projects. Though renewable energy programmes are thought to be part of the larger energy transition process, it has to be holistic, based on comprehensive transformation and the direction has to be towards environmental and social protection, community control and ownership, localisation, and democratic decision-making. The manner in which the solar programme is being pursued currently leaves open a lot of questions which, if not reviewed and deliberated over, will leave communities disempowered and the environment in a worse state.

[1] As per news published on 23-August-2017 in Naiduniya.com and Starsamachar.com