Since March 2020, the indigenous people and Adivasi farmers from Mikir Bamuni Grant village in Samaguri Revenue Circle, Nagaon, Assam, have been up in arms against the alleged “forceful” takeover of their agricultural lands measuring about 90 acres by Azure Power Forty Private Limited. The company, a subsidiary of international power corporation Azure Power Global Ltd, intends to set up a 15 MW Solar Power Plant in the area.

On Friday, the Delhi Solidarity Group held a press conference at Mukti Jujaru Bhawan in Nagaon town and released a report titled ‘The Anatomy of a Solar Land Grab – Report of a Fact-Finding Committee’ based on the evidence gathered by a fact finding committee (FFC) constituted at the request of affected families.

“It is beyond any doubt,” the FFC stated in the report, that the “impacted communities constitute Karbi and Adivasi peoples who have lived in that region and who should have been direct beneficiaries in terms of securing right to land that they cultivated, which was not only denied to them, but also such denial has amounted to an egregious attack on their fundamental right to livelihood, which is an integral part of the right to life.”

The report said that Azure Power was assisted by district authorities, revenue officials and the police in “forcibly” taking over land that was being cultivated by the villagers, in violation of judicial orders, laws and policies. “The construction of the solar plant was undertaken with blatant abuse of police power, employed to terrorise local people into submission, and this including a variety of serious human rights abuses. Despite widespread media coverage in local dailies, no action has been initiated against the guilty officials by the State Government,” the report noted. The FFC found that the Governor of Assam, Jagdish Mukhi, has been involved in authorising the alleged “illegal” transfer of land to Azure.

The report added that the solar power plant was being constructed on fertile agricultural land that had been cultivated for decades, was full of standing crop, and which was “illegally” destroyed by Azure. The local agricultural officials allegedly made the case that there had been no cultivation for over a decade to justify the transfer of land to Azure. The FFC also stated that they discovered that elephants crossed through the village, “their passage was blocked by the solar plant, and thus this constitutes an active elephant corridor and ecologically sensitive region.”

The FFC consisted of Odisha based environmentalist Prafulla Samantara, Leo Saldanha of the Benguluru-based Environment Support Group, Bhargavi Rao of the Delhi-based Center for Financial Accountability and Amit Kumar of the Delhi Solidarity Group.

During the press conference, Prafulla Samantara pointed out that the “Assam Government, especially the district administration of Nagaon, has played a crucial role in this corporate capture of resources dispossessing indigenous and adivasi people of Mikir Bamuni from their lands and livelihoods. Actions of police officials to assist this forcible takeover of land by Azure Power has resulted in blatant violation of human rights of those cultivating the land. The Assam government has served the interest of Azure Power at the cost of human rights, livelihood, and fundamental rights of villagers”.

The main contention of the protesting farmers has been that they were manipulated in giving away their land and that their rights as cultivators under the provisions of The Assam (Temporarily Settled Areas) Tenancy Act,1971, were violated.

In response to an email by FFC, Azure Power company officials stated that the company was “fully compliant with the rules and regulations of the State and the land purchase has been done in a lawful and fair manner, with due consultations with all stakeholders.” Furthermore, the company officials said that the process of scouting for the land and the subsequent purchase of land by Azure Power was a transaction between private landowners and the company.

Newsclick sent an email to Azure Power seeking their response on the allegations made in the report.

On the question of allegedly “illegal” and “forceful” takeover of the land from Adivasis, the Azure official said: “The land in question was private land that was purchased from the titleholders after due consultation of all stakeholders. We acquired the land from the private owners after due diligence and clearances and No Objection Certificate (NOC) from Local and District Administrations, Divisional Forest Officer( Nagaon División) as well as Gram Panchayat were obtained before the sale deed was executed with the landowners, after which the possession of the land was obtained,”

“First, there is no question of any forcible or illegal acquisition of the said land, secondly, the land does not fall under any notified elephant corridor. The ownership of the land is clearly supported by the High Court order vide Civil Review No. 74/2020 on September 30, 2020 which directed the authorities to hand over the land to Azure within one week from the date of order as the petitioners did not produce any document to show that they were the title holders of the said land . This status quo of the possession of land was later supported in favor of Azure Power in other subsequent High Court orders on March 5, 2021 and March 23, 2021 (sic),” the official added.

He mentioned that the villagers had not provided documents to show that they had been cultivating the land while “the circle office has details of all the land falling in that circle and the position stated by them must be taken at par by all including the courts.”

Amit Kumar of the Delhi Solidarity Group said that the Assam Tenancy Act clearly stated that “the land should have been transferred in the name of occupancy tenants – the farmers of Mikir Bamuni Grant, in this case. We were shocked to learn that these lands were first transferred to descendants of the original land grant landholder, that occupancy tenant’s rights over the land were deliberately ignored and then the purchase of this land by Azure Power was accommodated by revenue officials. Further, there is a blatant violation of the Assam Fixation of Ceiling on Landholdings Act, 1956. At no point did the state revenue officials stop the illegal appropriation of such a fertile agricultural land situated in the midst of an active elephant corridor.”

A woman from an affected family said in the press conference that the district police had brutally beaten up the villagers and arrested several of them for protesting near the plant site on December 29 last year.

On January 26, the farmers began an indefinite sit-in protest demanding back their lands and the release of the arrested persons. On March 2, the four arrested farmers were released on bail.

Meanwhile, on March 4, the Guwahati High Court ordered status quo to be maintained in respect of the land in question as a lower court in Nagaon had recognised the land sale as a civil dispute between owners of the land, the tenant farmers, and Azure.

Leo Saldanha said: “The Prime Minister Narendra Modi’s promotion of 450 GW of energy production from renewable sources is fraught with various inconsistencies, particularly the lack of appreciation of various details relating to finance demands, and social and environmental impacts.”

“It appears that the message to state governments is to assist the transnational and national private sector to secure land in any manner. If how Azure Power has grabbed land in Mikir Bamuni is any indication, one can expect such land grabs across India, all in the name of meeting the Paris Climate Agreement targets, and in making India a major producer of solar energy. Such so-called ‘Just Transitions’, which are claimed as responding to challenges of Climate Change, are completely outside the purview of India’s environmental laws despite specific directions from Supreme Court and National Green Tribunal that such projects must be subjected to an environmental clearance review,” he added.

This article first appeared in Newsclick. 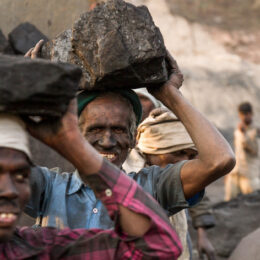 Salaam to Coal Miners of the Country 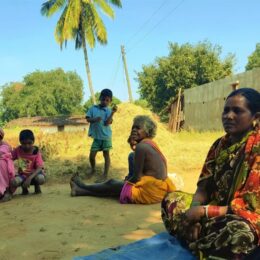 Engaging with the Pandemic: Hope and Despair in five villages of Chhattisgarh