Somewhat like ‘thalinomics’ of Economic Survey of 2019-20 which measured household incomes and “dosa economics” of Raghuram Rajan in 2016 to explain inflation, ‘car economics’ explains the higher-growth-higher-inequality paradigm 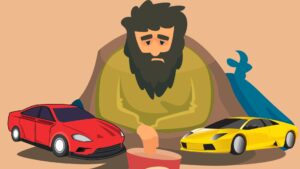 India’s march to high growth and ever higher inequality endures in 2023.

On January 11, 2023, the Union Cabinet renamed the “free” ration scheme for 62.5% households or 813.5 million people, rolled out from January 1, 2023, as the Pradhan Mantri Garib Kalyan Ann Yojana (PMGKAY). Until then, these 62.5% households received “subsidized” ration under the National Food Security Act (NFSA) of 2013. Now, the central government has appropriated all claims to “free” food (to which state governments contributed earlier) “to remove the financial burden of the poor and the poorest of the poor”.

The official poor count then stands at 62.5% of Indian households or 813.5 million Indians.

In sharp contrast, January 2023 also distinguished itself by some historic news of a different kind. One after the other Germany carmakers, Merce Benz and BMW, announced historic high sales of their luxury brands in 2022. Mercedes Benz said it registered 69% growth in sale of its luxury cars and declared to introduce 10 new models in 2023, most of them over Rs 1 crore price category (including super luxury Maybachs). The BMW registered 37% higher sale of its luxury cars, introduced three new models before 2022 ended and lined up five more for January 2023 release. Indian women too have taken to buying more luxury cars.

The apparent contradiction between the two – “free” food for 62.5% households and the remarkable rise in sale of luxury cars – escaped media, a key stakeholder in the state of the economy, and the central government, which shapes economic policies and is about to present its next budget.

Amidst all this, on January 6, 2023, the First Advance Estimate (AE1) of National Income 2022-23 was released, declaring 7% ‘real’ growth for FY23 (‘nominal’ growth of 15.4%) – more than 6.8% that the RBI estimated. Now, the government can retain the bragging right of India being the fastest growing major economy in the world for the second year running.

The news of historic high sale of luxury cars in 2022 hides a more disturbing development.

The latest data on wholesale of automobiles in the country, which the Society of Indian Automobile Manufacturers (SIAM) released on January 13, 2023, shows the sale of luxury cars continue to outstrip that of entry-level and low-end cars for the second successive fiscal year of FY23 (April-December 2022).

The SIAM data shows, in FY22, the sale of high-end utility vehicles (UVs) – which includes SUVs and luxury brands like Mercedes Benz and BMS – overtook entry-level and low-end passenger cars (PCs) by 22,122 units in FY22. In FY23 (April-December 2022), the sale of UVs has gone past PCs by 1.7 lakh units. By the time the fourth quarter of FY23 ends, the lead would be far higher. The FY22 saw the GDP growing at 8.7%, enabling India to reclaim (it had become so in 2015) the tag of fastest growing major economy in the world.

What this means is that high GDP growth is leading to higher income and wealth inequality – not higher prosperity of all.

There are other disturbing trends that the SIAM data reflects.

The situation is far worse than what the above numbers suggest because, don’t forget, India added 53 million to its population since FY19 (National Accounts Statistics).

The following two graphs map these developments (using the SIAM data), in which the FY23 numbers are actual numbers for the first three quarters (April-December 2022). 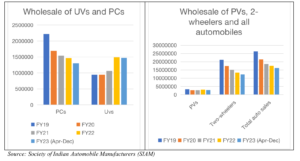 Response of RBI and FinMin to auto sales

There is an interesting paragraph in the RBI’s latest bulletin (December 2022).

It reads: “In a must-read speech titled The Logic of Monetary Policy14, Ben Bernanke draws the analogy of the economy as an automobile, the Committee as the driver, and monetary policy actions as taps on the accelerator or brake…”

It then goes on to explain it and frequently uses “car” for “automobile”. But when it comes to looking at the car or automobile sales the same attention is missing. It misses not only the drastic fall in auto sales it also misses the inversion in car sales (UVs overtaking PCs). Its November bulletin had made a grudging acknowledgment of the inversion, but not the fall in auto sales. It stopped short of stating the obvious (fall and inversion). It said the sales of automobiles was “propelled by demand for sports utility vehicles (SUVs) and mid-segment cars” in October and that the sales of entry level cars “reversed” to below pre-pandemic levels. The previous bulletins had missed even this although these two developments went back to more than a year.

There is no mention of the two dominant features of auto sales in India – thereby, missing the big picture of an ongoing economic crisis and rise in inequality. Studies have shown unless inequality is addressed, growth can’t be sustained for long.

Rising wealth of the top 1%

Surely, ‘car economics’ is not adequate to explain the inequality. Therefore, here is how the Credit Suisse’s Global Wealth Report 2022 presents the growth in inequality in India. 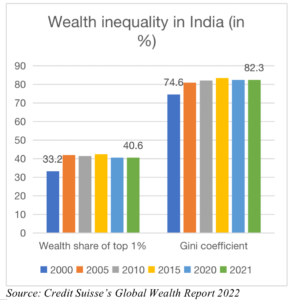 What the graph shows: