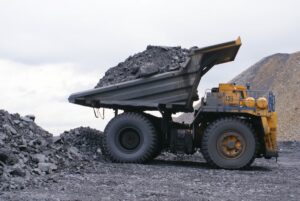 Between 2010 and 2020, India has witnessed more than 76 fly ash related incidents with eight major fly ash dyke breach  incidents happening only between 2019 and 2021. Even as the country went into the Covid-19 induced lockdown, we witnessed gruesome fly ash dyke (dam) breaches in the Singrauli district killing several people, inundating standing crops and polluting drinking water sources. While the Reliance’s Sasan Thermal Power Plant, Essar Thermal power plant and NTPC Vindhyachal Power plant were taken to the National Green Tribunals and fined for the breaches, there is something more that is of a larger concern to all of us. The more recent incidents of the Koradi and Khaperkheda Thermal Power Station ash dyke breaches, tell us that we are not taking the management and disposal of flyash seriously. While the local affected communities  fight for fair compensation and cleaning of their lands and water bodies, the question remains, how will we free our farmlands and water resources from the toxins that fly ash carries with itself?

Most thermal power plants are located at places where there is an uninterrupted source of water available to them. Being water intensive projects, these projects are located close to dams, coasts and rivers. The areas where the power plants are located are generally forests, grazing lands, rivers/streams, lakes, check dams and farmlands. Fly ash dykes are unfortunately located close to such ecosystems. The fly ash, carbon dioxide, sulfur oxides, mercury, metallic toxins, etc. that the power plants emit as effluents, gas and in the form of fly ash expose are critical and pose a threat to the wellbeing of the humans and the environment. Fly ash contains toxic metals like Selenium, Arsenic, Mercury, Chromium, Lead, Silica and Titanium that not only pose a threat to the ecosystems but also humans. Even a small mistake can lead to widespread disasters and irreversible damage to the humans, food chain, water resources and the environment. Yet they are little discussed and debated. There are glaring policy gaps that need to be addressed along with larger public awareness and education, making the industries and the governments accountable.

Rihand dam or Govind Ballabh Pant Sagar over Rihand River, a tributary of the Son River. The catchment area of this dam extends over Uttar Pradesh, Madhya Pradesh & Chhattisgarh whereas it supplies irrigation water in Bihar located downstream of the river. Apart from providing drinking and irrigation water, the dam also supports several industries and thermal power plants. The dam is also surrounded by coal mines owned by Northern Coalfields Limited. There are also industries like copper smelters, chemical industries and large coal mines. With there being several industries surrounding Rihand dam, it is the only source of drinking water for several people around the dam and downstream. A report by NewsClick published on 1st April 2022 highlights how polluted Rihand dam water is affecting the poor that have no other source but to drink water from the polluted dam. The cause for this is the deadly fly ash dyke. The fly ash dykes of NTPC Vindhyachal, Reliance Sasan and other thermal power plants,  leaching of chemicals from the NCL mines in the region pollute Rihand dam with toxic heavy metals and chemicals. If we see the Google Earth imagery, we can clearly see that the fly ash dykes are literally constructed on the reservoir’s bank/ periphery leading to pollution of water. In 2012, the report published by Centre for Science and Environment found that the industries located all along the dam were contaminating the Rihand dam with heavy chemicals that was then leaching into the ground water as well. The contamination is to the extent that the human blood, nails and hair were also shown mercury pollution. The study also found that the fish in the Rihand dam was not fit to eat.

Another example is the Pollution  from thermal power plants along the coast is also significant. One of the examples of coastal pollution due to thermal power plants is in Ennore. The thermal power plants and ash dykes located in the Ennore Creek in Tamil Nadu have severely contaminated the Ennore creek area, Kosasthalaiyar river, groundwater and Buckingham canal. The communities dependent on the creek for food, nutrition and livelihoods have also been affected. The Ennore creek supported traditional fisherfolk who would fish in the creek for decades but the creek was found to be contaminated with heavy metals. While the thermal power plant operated for years, the fly ash dyke was constructed in the intertidal area which were salt pans earlier. The creek still battles the pollution as more industries like the Kamarajar Port Limited, Adani Kattupalli Port Limited, L&T Shipbuilding Limited, etc.are being constructed in the vicinity. Another 2X660MW Ennore SEZ Thermal Power Plant was constructed on fly ash dyke itself. 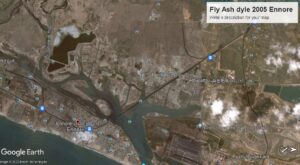 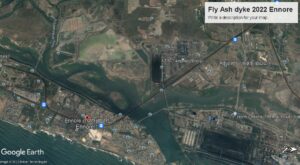 The more recent accidents at Koradi thermal power plant’s Khasala where in July 2022, the fly ash dykes breached led to destruction in five villages in the vicinity, contaminated Kanhan river and other water sources. Koradi thermal power plant’s fly ash dyke was constructed on a stream that received water from the upstream and the accumulated water in the dam was then released downstream where the communities used the water for agriculture, catch fish and meet other needs of the region. It was when there were heavy rains, the dam broke bringing all the fly ash along with it. Standing crops, drinking water resources like wells and streams and the Kanhan river, all were affected by the fly ash dyke breaches of Koradi and Khaperkheda thermal power plants. After the fly ash reached Kanhan River water treatment plant, the plant stopped operations and drinking water to Nagpur city was affected as there was no way to be able to treat and remove fly ash from the water.

Thermal power plants and other projects where burning of coal is involved are governed by environmental laws like the Environment Protection Act 1986, Water (Prevention and Control of Pollution) Act 1974, Air (Prevention and Control of Pollution) Act 1981 and the Fly ash notifications. In case of coastal areas, the projects also have to follow the provisions of the Coastal Regulation Zone Notification 1991, 2011 and 2019. Areas where forests are involved, the Wildlife Protection Act 1972 and the provisions of the Indian Forests Act 1927 are also applicable. Along with the laws, there are governing bodies formed under these rules and Acts which have to ensure that the companies comply with the provisions of the laws like the Ministry of Environment, Forests and Climate Change through its Regional Offices, Central Pollution Control Board, State Pollution Control Boards, the National Coastal Zone Management Authority, the State Coastal Zone Management Authorities, the Forest Department and so on. Despite the provisions in the laws and authorities to ensure compliance, the laws are still flouted and the pollution of the land and water bodies hasn’t stopped. In the  times of climate change and global warming, the concerns of food and water security are even more alarming and need urgent attention.

Despite all these accidents, we do not have a strong policy to regulate the construction of fly ash dykes, disposal of fly ash, and make the companies accountable for these disasters. First, when we allowed the thermal power plants to use Indian coal having higher ash content, we did not invest enough energy and thought into the management of the fly ash and its disposal. The projects involving fly ash dykes are evaluated by the expert appraisal committees of the Ministry of Environment Forests and Climate Change that do not have expertise in construction and management of dams. The landuse of areas on which these dykes are constructed should be thoroughly studied and the dyke should be accordingly placed, unlike the ash dyke that was constructed on a stream that received water from upstream and was also released downstream. The laws do require the power plants to construct a lining or a coating that does not lead to the leaching and contamination of the groundwater and surrounding lands, but the power plants do not oblige with these norms and regulations. Strict action should be taken against the power plants that do not comply with the provisions of the laws.

While the fly ash rules lists several ways to dispose of the fly ash which includes land filling of low lying areas, abandoned or exhausted mines, but the notification does not provide for the precautions and continuous studies to be undertaken where the fly ash is disposed of. If not monitored regularly, it may lead to more uncontrolled contamination of water bodies and lands. It is extremely important to regulate the fly ash dykes at the construction, handling and disposal stages as the most affected are villagers, poor, daily wage labourers, farmers, fisherfolk, tribals and so on. Exposing them to the pollution is not only inhuman but also violates their fundamental rights to live with dignity and in a safe environment with clean air and water. Water brings disease to the poor villagers of Sonbhadra whose only source of water is Rihand dam. We not only violate their fundamental rights but also push them further into the trap of poverty.