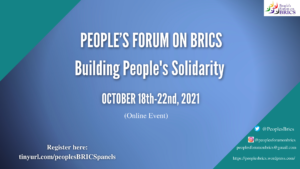 Register here to participate in the online summit:

Even as the 13th BRICS Summit was organised last month and chaired by India with little impact, the People’s Forum on BRICS (a network of people’s movements, progressive civil society organizations, and trade unions) is convening a five-day online People’s Summit on BRICS from 18th to 22nd October 2021 as a response to the official summit.

The event aims to create a space where a network of people’s movements, progressive civil society organizations, and trade unions from across the BRICS nations discuss, analyze, question, and seek alternatives to the agendas that are being undemocratically pushed in our countries and to discuss and challenge the positions that BRICS is placing at international fora. The People’s Forum is being hosted in India for the second time, the first being in 2016 in Goa. However, due to COVID, the forum has been moved online. The event will see sessions across themes from people’s organisations, civil society groups and activists from across BRICS countries.

The People’s Forum will attempt to raise critical voices from marginalised sections on social, ecological, political and economic concerns that are often ignored at inter-governmental levels and official summits. The focus is to build solidarities across borders among social movements, progressive civil society organizations and to advance an alternative model of development that puts people before profit.

The BRICS bloc, initially envisioned as an association of emerging economies to challenge the economic & financial clout of developed western economies, of the dollar supremacy, and developmental suzerainty of the IMF, the World Bank, and the WTO, has done little to disrupt the status quo.

The nations in the bloc are characterized by complex socio-political realities, supremacist ideologies, ethno-nationalist compulsions, divergent economic and political trajectories, profound inequalities, in the wider background of the climate crisis. The BRICS summit now is seemingly mirroring the very global actors it had purportedly stood up to challenge.

Through the five days there will be discussions on seven broad thematic areas in the context of BRICS nations including Pandemic and Disaster Resilience; Geo-economics & Economic Partnership; Geo-politics, Gender, Energy, Climate Change and Natural Resources, Labour Rights and Social Justice.

The Inaugural Plenary will take place on 18th October, 2021 and the thematic sessions will take place on 19th, 20th, 21st October, 2021 and the forum will draw to a close with the Closing Plenary happening on 22nd October, 2021. The schedule for all the sessions with joining and registration details can be found on the official website (https://peoplesbrics.wordpress.com/). The events are open for all the members of the public. Those interested can register on this link for all the sessions (tinyurl.com/peoplesbrics-2021-register) and can register for individual sessions as well.

Link to the Program Schedule: