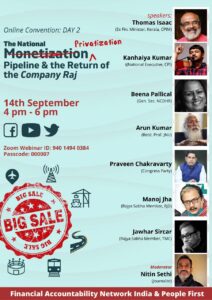 The National Monetization PRIVATIZATION Pipeline &  The Return of the Company Raj

The government has decided to put our national assets on sale for private bidders, i.e., a handful of big business houses thereby promoting monopolies and oligopolies in the country.

A government that was on stand by as millions paid the price for its own fatal complacency in the battle against the pandemic, now is using the pretext of the virus to justify its policy of privatization and taking to fruition the 30 year old neoliberal agenda. And it has done so with innovative words like “monetization”, “unlocking of value” and “lease” in its bid to raise 6 lakh crores by 2025.

No discussion took place in the Parliament while deciding upon the future of a range of public sector assets – roads, railways, ports, telecom, gas, power and so on – built over seventy years with lakhs of crores of the tax payers’ money. Every patriotic and democratic citizen of this country should be worried about what lies at the end of this “pipeline”. How profit motive goes against the concerns of access, accountability and affordability for the common people; how in the name of “efficiency” we are handing over the backbone of the country’s economy to the uncertainties of the market; and how the fate of lakhs of PSU workers are being jeopardized. We must stand together against putting our nation on “lease”. 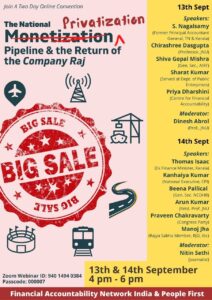 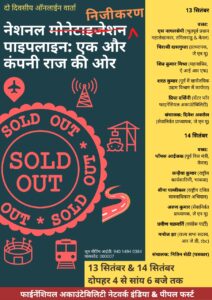