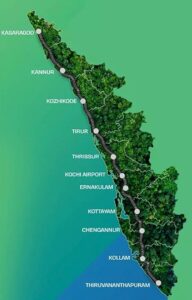 Since 2018, we in Kerala especially those of us living in mountainous areas or the coast are afraid when clouds darken the skies and there is possibility of rains. This is because for 2 years in sequence we have faced torrential floods when dams, rivers and lakes (all water bodies ) overflow and take away everything that we possess, sometimes the lives of our beloved ones. This is because for 2 years and infrequently too mountains and hills have lost stability and come down like an avalanche breaking all conventional and accepted definitions of land slide and mountain collapse. We have had gory and traumatic scenes of being submerged in water or buried in soil.

A silver lining to this dark cloud of disaster has been the emergence  of concepts and words like “rebuild Kerala along environmental /ecological restoration lines . There was hope that the development and planning process would include decentralized consultative processes that would take into account the ecologically vulnerable and fragile zones in this small state. That this process will consider regional , micro level factors that each area has and follow diverse patterns for restoring the land back to a state where people /communities can find secure, stable livelihoods with access to resources and right to life and decent living standards. For the people of Kerala who have been living with this Damocles sword of disaster and human induced acceleration of climate change ill effects, development meant safe and secure homes, stable livelihoods, access to clean air and water, food security, just health facilities and education, reliable transportation , to name a few. It would also mean an end to all kinds of violence in the society –domestic, gender, politically motivated and reinstating of a democratic process of decision making.  An honest communication with communities especially people who are marginalized in every sense of the word would reveal their basic needs are the above…..those with hidden agendas including politically influenced program sheets alone would say otherwise. This is for us the real silver lining to the ominous dark cloud.

But the real SILVER LINE that has been in the news came in a few years ago. It went unnoticed for a while but the recent developments and responses among citizens concerning the implementation of the Silver Line Semi Speed Rail Project included in the National Rail Plan with the Kerala Rail Development Corporation Ltd ( K-Rail) at the helm of the project indicate that it has been brought to the fore again.

Apart from our misgivings about the financial viability of the project and its anticipated contributions to the Indian Railway System and State of Kerala, we are also convinced about the environmental, social and cultural adverse impact of the project. The highly reliable report made by The Centre for Financial Accountability has asked pertinent and shocking questions including whether Kerala really needs such a bullet train. Apart from this financial debt that the State will have to bear along with the ambiguity of funding sources has already raised eyebrows among well known economists both in the State and the country.

As you know , this small state of ours is already ravaged by 2 devastating floods, fatal landslides, torrential rains and increase in number of ecologically fragile areas. The environmental vulnerability of the State will be doubled as the rail project which extends 529.45 kms from the southern most Kochu veli near Thiruvananthapuram to Kasargod cut across 178 villages in 11 districts. Ahead of the social impact study, the laying of boundary stone of the proposed semi high speed rail corridor has  been completed in 15 villages in Thiruvananthapuram, Kollam, Ernakulam, Kannur and Kasargod districts.  The 11 affected districts apart from the 5 mentioned above include Pathanamthitta /Alapuzha,Kottayam, Thrissur , Malappuram and Kozhikode. This fragmentation will lead to the devastation of several crucial ecosystems that are the base of the stability and livelihood of the population. This along with the technical way in which 80% of the rail line will be constructed on tall concrete embankments will result in blocking natural hydrological cycles along with land use pattern changes, all of which we cannot afford at this stage of crisis that we are in.

The land acquisition process ( 1,383 hectares of land and 9314 buildings will be affected ) that has started already in many parts of the State without prior intimation to the public has been creating protests and reactions from the affected people.Meanwhile, the K- Rail , a joint ventire between the State Government and Union Railway Ministry  had drawn flak from the High Court , for laying survey or boundary stones , emblazoned with KRAIL on it, on properties to be acquired for the project. The Court barred K-Rail from laying the stone while allowing the survey to continue “but within the parameters of the law and maintaining the limits of civilized behavior and civility “. A quick look at the videos available on the response of people to the survey team would reveal several instances of overstepping the limits of civilized behavior and civility.   The Chief Minister assures that the State will meet the entire land acquisition cost of Rs 13,700 crores . We understand with shock that the Niti Aayog had earlier communicated to the Kerala Government that the project cost would come to almost double the estimate of the state government (which is Rs 63,490 crore) to Rs 1,26,000 crore! The public debt of Kerala is expected to touch Rs 3.27 lakh crore in the current fiscal ie 2021-2022.

We are shocked and livid that there has been no transparency in making available crucial documents like the Detailed Project Report, the Feasibility Reports,  Environmental Impact Assessment Reports,  , Social Impact Assessment Report , the Land Acquisition details, the Resettlement and Rehabilitation surveys and so on, to mention a few. Our convictions about the fallacy of the project is based on the study and analysis done by team of experts whom we as people can depend upon as unbiased and democratic. There is now a wealth of reliable materials in social media written with authentic data proving the adverse affects of the projects from poets, writers, economists, engineers, journalists, ecologists including the much acclaimed Metro Man E. Sridharan.

The lack of transparency and initiation of land acquisition processes in many places without prior intimation to the public has caused mixed reactions and responses touching on violence and use of brute police force. The mass coming together of more than 5000 people from areas directly affected by the project on  Oct 21st 2021 in front of Thiruvananthapuram Secretariat and the crucial questions they raised about the need for such a divisive development that will benefit a few has fallen on deaf ears. The only answer that the Chief Minister of Kerala is offering to the protestors and civil society who have dared question is “ Silver line project is inevitable for Kerala” . Everyday we witness protests and resistance by local communities in various parts of Kerala where unannounced survey team reaches villages and puts stones marking the places where the Silver line will be passing .

Now we hear that door to door campaign has started by LDF that the anti development movement is triggered by a joint front created by BJP-Congress-Jamaithia Islamia .  We also understand that the Government is going to organize a public dialogue with selected members of the  civil society about the benefits of the project. There are arrogant and demeaning statements floating in the air uttered by those in power that include “ no need to threaten us, we will go forward” It will be worth while in the long run  to examine who is threatening whom ! As this is being written, the first interaction with “ eminent “ citizens has taken place in the capital city of Thiruvananthapuram..none of the people we know as eminent has been invited. This show how “ invited eminent people” selected  by criteria unknown will take place in the coming days in other districts too.

A petition signed by over 100 people from different walks of life that was given to the Chief Minister on 23rd December ( the first death anniversary of noted poetess B.Sugatha Kumari who would have been at the forefront of the anti KRail movement had she been alive ) is met with a crisp reply that it has been forwarded to the Principal Secretary , Transportation department. Is this the kind of reply that should be given to a public  petition endorsed by academicians, senior journalists, ecologists, farmers collective, engineers, students ? A similar letter endorsed by 150 people  requesting the Prime Minister of the country to refrain from giving permission to the project has been given on New Year’s day. This is to establish the fact that the resistance and protest is not just from the affected people but by many who believe that the need of the hour for this state is not Krail but much more urgent priorities.

It is evident that with the K-Rail Silver line project, no cloud in Kerala will have a silver line. We will be covered by the eternal cloud of undemocratic, unjust decision making and brutal implementation of a falsified project named development .

The original article published in Counter Currents.org can be accessed here.