The information available in public domain is that JICA is financing the Mumbai-Ahmedabad Bullet Train Project by lending 88 thousand crore rupees at an interest rate of 0.1%. Payback period is 50 years with a moratorium of 15 years. The claim is that loan is free and Japan is behaving like a close friend. It is true that no other agency such as World Bank is lending at such low rates of interest. But this is not benevolence. It is part of Japan’s economic policy and it serves Japan’s interests much more than the interests of India. Japan, like other developed economies, is undergoing stagflation. Their capital is in search of new markets. Advancement in technology can be put to a productive use only if it is sold to the countries like India. In this particular sector of high-speed rail, Japan is facing fierce competition after France and China have entered the market. That explains the “favourable” interest rates that they have offered.

The major concern is not about the interest rate but the relative strength of currencies – Japanese Yen and Indian Rupee. As a much higher inflation economy than Japan, Indian Rupee is continuously getting depreciated against the Japanese Yen. One Yen was worth ₹0.35 in September 2007, but 10 years later, in September 2017, every yen is worth 64% more, at ₹0.58. So, any Japanese Yen-loan taken in 2007 has become 1.64 times by 2017, in just 10 years! It is possible that in the 50-year loan repayment period, the ₹88000 crores loan would become 3 times more of the original loan amount. This will put a huge extra burden on the Indian economy. Moreover, the fetish is not likely to stop with MAHSR. More lines will be planned and more loans will be taken. The burden of debt being brought by MAHSR is just the tip of the iceberg. This particular government may not stay but the citizens of India will be tied to the debt forever.

Though it is a PPP project, it is not very clear what the exact model of financing MAHSR will be. However, it must not be forgotten how badly some of the most ambitious PPP projects of transport sector have failed in the recent past. For example, Delhi Metro’s Airport Express line was awarded to Reliance-led consortium in 2008 which could become operational only in February 2011. The line was shut down in July 2012 in the midst of consistently low ridership and safety concerns. Blames were exchanged between Delhi Metro Rail Corporation (DMRC) and DAMEPL, the Reliance-led consortium. The matter went to arbitration after DMRC rejected the termination notice served by DAMEPL. The rosy picture woven around the idea of PPP should not misguide the transport policy anymore.

Claims were made that this will boost the ‘Make in India’ initiative. It was being said that technology transfer will happen. Indian manufacturing will get a boost. All such claims have started appearing as they always were – lies, damn lies. Reportedly, the Japanese firms are reluctant to source locally and have already raised concerns about the quality of work in SAIL and Jindal Steel. Therefore, this project will primarily benefit the Japanese firms like Nippon Steel. The government is telling us that this project will boost the economy. Nowadays, it has become a trend to justify anything in the name of economic growth without sufficient evidence to back the claims up. Scientific research has shown that many smaller projects than a single mega-project contribute positively to economic development and employment creation. In the case of regional transport, such mega-projects operating at high energy levels lead to spatial polarization and concentration of benefits in few centres rather than building inter-regional connectivity.

It is also important to consider opportunity cost and not just the budgeted cost. It is a question of priorities. The same amount of public money could finance the annual health budget and annual education budget for 3.5 years and 1.5 years respectively. What is more necessary for the citizen of India – safety in conventional railways and network upgrade, or expensive means of consuming speed?

This is another example of an over-capacity system. India already has plenty of overcapacity systems including installed electricity capacity. India has an installed capacity of over 340,000 MW which at even 70% PLF can generate about 240,000 MW. This is far more than the present peak demand projection of around 175,000 MW. So, are such electricity intensive technologies being pushed to also consume more electricity thus justifying the wasteful excess investments in that sector? 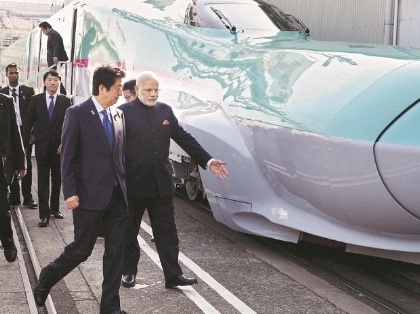