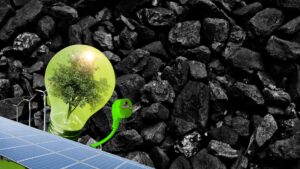 A study titled “Financiers Prefer Wind And Solar Over Coal” has been released by CFA (Center For Financial Accountability). According to the Coal vs. Renewables Financial Analysis 2022, L&T Finance overtook SBI as the largest financier of renewable energy project financing in 2021.

The annual energy finance conference co-hosted by CFA and IIT Madras saw the publication of the fifth edition of Coal vs Renewable Financial Analysis, written by Climate Trends and CFA.
For the first time since tracking started, there was no new project finance for coal power projects in the year 2021, despite the total funding for new energy projects being 60% lower in 2021 compared to 2017 levels. Rajasthan followed by Gujarat were the top beneficiaries of renewable energy lending, with INR 22,187 crore and 4,025 crores being poured into the states respectively. Collectively they accounted for 77% of all renewable energy loans.

“The writing is on the wall. Lending institutions are increasingly moving away from coal lending given the risks. After Federal Bank, the first commercial bank to have announced a coal exit policy, Sarvodaya Small Finance Bank has also announced an end to financing coal projects,” said Joe Athially, Executive Director, Centre for Financial Accountability indicating how more and more financial institutions are likely to follow.

Highlights of The Report

This article was originally published in Saur Energy and can be read here.