So are the protests against the regulator GEAC’s lack of scientific rigour, due processes and a remarkable reluctance to prioritize the safety of life and environment. 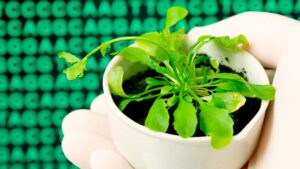 Genetically modified food is back in the news after the regulator Genetic Engineering Appraisal Committee (GEAC) recommended “environmental release” of GM Mustard, billed as an indigenously developed transgenic hybrid or a “swadeshi” product, on October 18, 2022. This is the same DMH-11 – carrying barnase and barstar genes from soil bacterium Bacillus amyloliquefaciens – which the GEAC had recommended for “commercial” cultivation five years ago, in 2017, but the Centre held back its approval due to strong protests.

Protest is back too, with two RSS affiliates, Swadesh Jagran Manch (SJM) and Bharatiya Kisan Sangh (BKS) taking the lead by seeking not only a ban on DMH-11 but also a probe by central agencies into the “unholy” nexus in the approval process. The Coalition for GM-free India, a civil society group, has also sought a ban on it.

If the Centre approves it now, this would be the first genetically modified food to be cultivated in India.

India allows only Bt Cotton, a genetically modified non-food crop. Here is a shocking fact. Bt Cotton was introduced clandestinely in 2002 by the Vajpayee-led NDA government. A Supreme Court-appointed panel, which looked at it, said in its 2012 report that the test details were never made public, the approval process was rigged and there was no debate inside or outside the Parliament before its release.

A couple of years earlier in 2010, the UPA-II had denied permission for commercial cultivation of Bt Brinjal (food), which the GEAC had recommended – because bio-safety tests were self-certified and many essential tests had not been conducted, which the GECA had overlooked.

The current GEAC recommendation allows “environmental release” for (i) “seed production and testing” prior to its commercial release and (ii) for field studies “to generate scientific evidences” for its impact on “honey bees and other pollinators” – a post-environmental release test!

The protest now, like in 2017, is against the GEAC’s lack of scientific rigour and suspicion that the processes are rigged. Some key points.

The GEAC minutes strongly warn that “usage of any formulation of herbicide is not permitted in the farmer’s field under any situation” and that such use would “require the necessary permission as per the procedures and protocols of safety assessment of insecticides/ herbicides by CIB&RC”. Why did it then allow DMH-11 which needs the use of herbicide?

Did the GEAC miss the irony or betrayed its complicity?

It didn’t identify the herbicide in question but Mahajan did, in his letter, as “glufosinate” and wrote, DMH-11 had “never been” tested as herbicide-tolerant crop “at all” and that the development of this glufosinate-tolerant crop “was in violation of India’s pesticides regulations”. Further, he pointed out, “Bayer will benefit the most” through its existing brands if glufosinate is allowed.