While it targets welfare schemes, the Union government has also written off crores in outstanding loans for India’s rich and given huge corporate tax rebates. 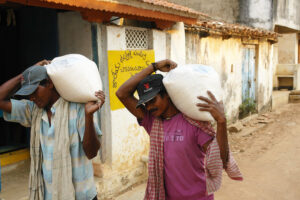 The Union government seems to be making a concerted effort to deride and ultimately deny the need for any public spending on subsidies and services by describing these as “freebies” that are evidence of “revdi culture” – candy distributed to citizens.

Aided by the judiciary, the Bharatiya Janata Party is creating a perception that such services are inimical to economic growth and a drag on the country’s finances. The Supreme Court had even recommended the formation of an expert panel to look into the “problem” of “freebies” announced in the run-up to elections.

The Solicitor General emphasised the need for such an expert committee. “We have political parties whose only wish is to distribute freebies to get elected…,” he claimed.

Supreme Court says freebies is an important issue and a debate is needed on this. CJI NV Ramana says suppose Centre makes a law that states cannot give freebies, so can we say such a law is not open to judicial scrutiny. For the welfare of the country, we are hearing this issue. pic.twitter.com/bEe6Ac0KSh

This debate reflects an effort to accelerate the centralisation of power, as the Union government claims a monopoly over public policy and pushes a preference for technocratic “experts” over democratically elected representatives.

While this anti-poor rhetoric has been sustained under the guise of questioning “freebies”, loan write-offs for India’s rich, tax holidays for firms located in Special Economic Zones, Production Linked Incentives in the form of cash incentives for firms in specified sectors and the huge corporate tax rebates are seen as “incentives”.

There has been a great deal of discussion about state governments announcing welfare schemes and subsidies valued at more than Rs 1 lakh crore in this year but no real debate about the Rs 10 lakh crore worth of loan write-offs in the last five financial years, as revealed in the recently concluded parliament session.

Instead of the silence Modi has maintained on the Yes Bank collapse, will he tell the country why the banks have written off ₹ 7,78,000 crore of loans since 2014? In 2018-19 alone, the write-offs were of ₹ 1.83 lakh crore. Who were the cronies who profited from this largesse?

The list of top 10 defaulters include Mehul Choksi’s company Gitanjali Gems that owes the banks a whopping Rs 7,110 crore. Together, the top 10 defaulters alone owe Rs 37,441 crore – which is higher than the total allocation this year on health and family welfare in Uttar Pradesh.

Since Prime Minister Narendra Modi chose to denounce “revdi culture” when he was inaugurating the Bundelkhand Expressway in Uttar Pradesh it is worth noting that the ten defaulters alone owed more than the estimated budgetary allocation on transport in the state last year. Add to this the freebie of a gigantic Rs 1.84 lakh crore rebate on corporate tax in 2019.

All this makes it clear that the opposition to so-called freebies is actually an attack on the welfare of India’s poorest people. As economist Yamini Aiyar has pointed out, the government has failed to make sufficient public investment in health, education and social security measures or ensure the creation of sufficiently paying jobs. To compensate for this, it has been providing free services that are essential but too inadequate to ensure a decent living for the vulnerable.

To target these services by claiming that they are a drag on the country’s financial health amounts to taking away the straws that millions clutch at.

In this context, the question raised by economist Reetika Khera is crucial. “Whenever we talk about welfare spending, we only focus on whether we are spending too little or too much,” she told The Hindu. “We never discuss whether we are raising enough revenues in the first place.”

Wealthy Indians have been the biggest beneficiaries of the government that runs on our tax monies, and so it is reasonable to expect them to pay their fair share of taxes.

One way to ensure universal social and economic rights, some economists have suggested, is to apply a 2% wealth tax and 50% inheritance tax on the top 1% Indians. Economists believe that the revenues generated from these two taxes can be enough to ensure food, education, healthcare, livelihood and pensions for all Indians.

Modi ji to IRS : Don't touch my darlings!
50 IRS Officers simply suggested a policy to have wealth tax on the super-rich, to tackle #COVID19. For just a mere proposal that the wealth of India’s corrupt mega-crorepatis be taxed, this govt now wants a probe on upright IRS officers!

Economists Prabhat Patnaik and Jayati Ghosh postulate that increasing social spending will improve the economic situation of the poor and working classes, which will in turn spur economic activity and growth from below – a “bubble up” plan to counter the farce of the “trickle down” theory. This 2% tax, they calculate, will not have any significant impact on the wealth of the super-rich as it is growing at double digit rate annually.

Even before the coronavirus lockdown squeezed them, the vast majority of Indians were already living on the edge. The burden of the crisis has been borne disproportionately by those on the margins. Women were seven times more likely to lose their job during the pandemic and were 11 times more likely to not return to work.

The communal colour given to the virus meant that the percentage of persons with no work among the self-employed was starkly higher among Muslims. Overall, the pandemic pushed 23 crore more Indians below the national minimum wage.

On the other hand, in 2021, the number of Indian dollar billionaire families grew from 102 to 142, as per the Oxfam Inequality Report released in January 2022.

For the sake of comparison, if we look at the free food grain given to the poor during the Covid lockdown, the government till April claims to have spent about Rs 3.4 lakh crore. More than double the amount could have been generated with a 2% wealth tax on the top 1%, which would have yielded Rs 7.54 lakh crore.

During the pandemic, the government claimed to have increased expenditure on public healthcare in 2021-’22 by 73% year-on-year to Rs 4.72 lakh crore. That, again, is lower than the amount that a wealth tax could have yielded.

This, along with a 50% Inheritance Tax on the top 1%, could raise nearly Rs 17 lakh crore annually.

At the end of the day, the “freebie” debate is essentially one about the nature of the state. Should the state ensure basic services, like education, healthcare, social security, to all its citizens or should it provide incentives to the rich few for profit accumulation? It is not a question of a lack of resources but rather one of a lack of political will.