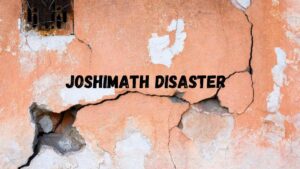 An inevitable result of long neglect of scientific warnings, of gross financialization of nature and total lack of Environmental and Social Safeguard Policies!

Joshimath woke up to large cracks on roads and houses with muddy water seeping from them, not in one or two but in over 600 houses! News media and portals are now calling it the ‘sinking’ town’! Relief and evacuation operations have started but proceeding at a snail’s pace, with hundreds of families forced to spend near-zero temp nights under flimsy shelters. In its usual casual manner, the BJP chief minister of Uttarakhand has talked about constituting yet another “committee to investigate”, despite the fact that the underlying causes are well known for about 50 years now, with recommendations and warnings by earlier expert committees violated with impunity!

This historical place that is the gateway to Badrinath and Hemkund Sahib was long known to be a land subsidence zone by experts! There are five primary reasons behind what is happening now in Joshimath, which has been neglected by the government and agencies – “chardham mahamarg vikas pariyojana” and NTPC. Today’s disaster is a direct result of that.

The 1976 “Mishra Commission”, with experts from specialized agencies and constituted by the then government, made very clear observations about most of these vulnerabilities. It clearly warned against heavy construction activities, removing base boulders, disturbing the underlying soil etc. Yet, those ‘prohibited’ activities are exactly those that both NTPC and ‘Chardham road’ violated. Thus they are directly responsible for the current disaster, along with successive governments of Uttarakhand and the centre.

While Joshimath is in the news cycle right now, it is by no means an aberration. To throw caution to the wind at the altar of development and growth has in fact become the norm. The complex topography of the Himalayas from Himachal to Sikkim bears the risks of such mindless play of dice. One of the causal factors that stand out for such a disaster, even the government’s own experts agree, is the Tapovan – Vishnugarh HydroElectric Power Project located below the major city!

While a lot is being talked about today in terms of emergency measures, rehabilitation and demolition, not much is being said about how this came about. Or more importantly, how did such rampant construction get the requisite clearances? Or who in fact is funding such projects? Where is the money coming from?

Construction started at the Hydroelectric Power Project in 2006 with an estimated cost of Rs. 29,785 Million (USD 677 Million) was scheduled to be commissioned in 2012 -13. After the destruction of the 2013 and 2021 floods washing away the constructions, the project was scheduled to be commissioned this year! The project has already been delayed and carries a Rs. 1500 crore loss due to the delays! Despite being in a highly seismic and ecologically complex Himalayan area the project got Environment and Forest clearances in 2004 and the Environment Impact Assessment (EIA). The money came from the Asian Development Bank.

The EIA report submitted by NTPC to Asian Development Bank mentions Uttarakhand is a seismically active state classed under seismic zones IV and V on the Seismic Zoning Map of India Its assessment of impacts focuses on four major components – hydrology that focuses only on the reduced river flow between barrage, aquatic ecosystems focusing on prevention of upstream fish movement, land resources on the loss of agricultural and forest land and the resettlement of 57 households. Even though the EIA claims to have done a detailed assessment of the land, soil and impacts, it does not take into account the impact of the construction process on the geology and ecology of the place. Particularly since it is a landslide-prone area. Even after the constructions were washed away in the 2013 and 2021 floods, the project was not stalled or stopped but continued construction once again! Nor does it take into account the now prophetic directions of the Mishra Committee. The EIA in fact justifies the project on the ground of its contribution to growth and the need for clean energy while giving a blind eye to its not so clean consequences.

Need for robust Environmental and social safeguards in development finance

The fact that such unviable and unsustainable projects get clearance goes on to show the problems around implementation even as some of these multinational development banks like the ADB claim to have environmental and social safeguards in place. What it also shows is the sorry state of affairs when it comes to our own banks that have no such safeguards in place when it comes to development lending.

A slew of Indian Financial institutions have their fingers in the pie! NTPC has raised hundreds of crores through issue of bonds by showing the Tapovan – Vishnugarh project as one of the ‘securities’. LIC, Central Bank of India, Punjab National Bank, Union Bank of India, Indian Overseas Bank are some of the institutional lenders to these bonds. This is not just with this one project, as of March 2017, long-term loan borrowing of NHPC stood at Rs. 17,246 crores which includes secured loans.  The secured loans include borrowings from domestic banks and financial institutions like State Bank of India, Indian Overseas Bank, ICICI Bank Limited, Jammu & Kashmir Bank Limited, Bank of India, Axis Bank, State Bank of Patiala, State Bank of Bikaner & Jaipur, HDFC Bank, IndusInd Bank, Bank of Baroda, Central Bank of India, Kotak Mahindra Bank, RBL Bank, Life Insurance Corporation, Power Finance Corporation, and Rural Electrification Corporation. Not a single one of these institutions has an environment and safeguard policy with accountability mechanisms!

Such disasters are rude reminders of the mindless development model that is being forced down on us, financed by our own institutions as well as State! One also needs to be vigilant against more funding being pumped in the name of disaster risk reduction and resilient finance making this tragic disaster into another opportunity for profiteers aided by  International and National financial institutions!

We the undersigned demand: