The fifth edition of Coal vs Renewable Financial Analysis, authored by Climate Trends and Centre for Financial Accountability (CFA), was released at CFA’s annual energy finance conference hosted in collaboration with IIT Madras on Tuesday. 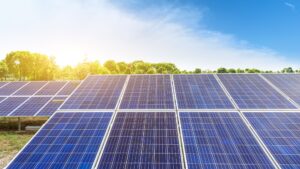 The fifth edition of Coal vs Renewable Financial Analysis, authored by Climate Trends and Centre for Financial Accountability (CFA), was released at CFA’s annual energy finance conference hosted in collaboration with IIT Madras on Tuesday.

While the total funding for new energy projects in 2021 is 60 per cent lower compared to 2017 levels, for the first time since reporting it was found that there was no new project finance for coal power projects in the year 2021.

Finance for renewable energy projects on the other hand has seen a 39 per cent year-on-year increase from 2020. In order to meet its 2030 targets of 450 GW installed capacity, RE will need to be deployed at 2.5 times the current rate.

“The writing is on the wall. Lending institutions are increasingly moving away from coal lending given the risks. After Federal Bank, the first commercial bank to have announced a coal exit policy, Sarvodaya Small Finance Bank has also announced an end to financing coal projects. This should signal to institutions who have either provided loans or underwriting services, or have shareholdings in coal companies to rethink their lending,” said Joe Athially, Executive Director, Centre for Financial Accountability.

Rajasthan followed by Gujarat were the top beneficiaries of renewable energy lending, with Rs 22,187 crore and Rs 4,025 crore being poured into the states, respectively.

Collectively they accounted for 77 per cent of all renewable energy loans.

By some estimates, India would need $10 trillion to transition to Net Zero by 2070.

“The sheer scale of climate finance needed to meet India’s mitigation goals will require an all-hands-on deck approach.The recent announcement of the Sovereign Green Bond Framework is encouraging. The green bond issue size is US$2 billion for the fiscal year (FY) 2022-23. While this is dwarfed by the finance India will need ultimately, as such it signals India’s ambitions to expand renewable energy and reduce our carbon intensity,” said Shivani Shah, Communications Strategist, Climate Trends.

Further, the draft National Electricity Plan 2022 sees about 18GW reduction in coal capacity by 2030 when compared to the OGC report released in 2020.

In order to realise this, state-owned institutions and private banks need to make available cheaper finance for renewable energy projects.

This article was originally published in The Economic Times and can be read here.