Prime Minister Modi continues to defend the farm Acts  passed in the houses by blaming the opposition of spreading lies. He also added that the Acts will enable famers to sell their produce anywhere in the world and that this is a much needed reform. But the farmer unions and organisation protesting the reforms fear that the reforms will enable profit for big corporate companies and cement their monopoly over the storage, distribution and production.

Agriculture is the largest provider of livelihood to almost 55 % of the total workforce. The growth of agriculture is also linked with the agriculture credit policies of RBI and banks. One of the factors that have contributed to the growth of agricultural sector has been agricultural credits of the banking system. The Priority Sector Lending by the commercial banks have been primary among them that has strengthened rural agricultural credit since the 1970s. This article tries to look at the changes in PSL norms and lending practices in agriculture which clearly shows decreasing lending to small and marginal farmers and increased lending to corporates and agro industries in the name of PSL.

Priority sector lending was introduced for issuing focused credit to farmers and marginalized sections. But in last three decades, it has been continuously diluted in terms of direct lending percentage as well as the focus group has been expanded to include many sectors which can  otherwise easily avail credit. Now banks are allowed to purchase PSL certificates from other banks to meet their lending target, which nullifies PSL’s unique objective of decentralized credit system.

Priority Sector Lending (PSL) since its formalisation in 1972 based on the report by Informal Study Group on Statistics relating to advances to the priority sectors constituted by the RBI in 1971, could be said to be at the heart of the nationalisation of banks and lending to agricultural sector has been  fundamental to PSL. The changes made through recommendations of various committees and working groups have been socially oriented till the late 80s. These changes had given a social framework to the lending practices under PSL.

Amidst country wide protests of famers for weeks against the Farm Acts, the President gave his assent last Sunday (27th September). The three Acts – Farmers Produce Trade and Commerce (Promotion and Facilitation) Act, 2020; Farmers (Empowerment and Protection) Agreement on Price Assurance and Farm Services Act, 2020; and Essential Commodities (Amendment) Act were passed in the Rajya Sabha through a voice vote, completely negating the oppositions demanding for a division vote. The way it was passed and absolute refusal to go back on the reforms and brutally attacking the protesting farmers are all traits of this government that we have seen repeatedly in the past and so is the purpose of these Acts. As many have rightly pointed out, these Acts together is a push for corporatisation of agriculture and will decimate the small and marginal farmers. The Farm Acts, when implemented will be advantageous for private capital and agro businesses than farmers, but the path to this end has been paved over time. The changes to the priority sector lending over time is only one of the examples that proves why the assertion of the PM, like many other before is nothing but a blatant lie.

At the time of formalisation, Priority Sector Lending consisted of the following categories: agriculture, small scale industries, industrial estates, road and water transport operators, retail traders, professional and self-employed persons and education. There were no targets imposed but were of priority on terms of availing the credit and with concessions on the rate of interest. But over the years, these categories too changed, today we have agriculture, Micro Small and Medium Enterprises (MSME), export credit, housing, education, social infrastructure, renewable energy and others as PSL.

On 4th September, RBI revised PSL norms once again; this time including start – ups (upto ₹50Crs), loans for installations of solar power plants, setting up of bio-gas plants into priority sector lending. Further the credit limits of Farmers Producers Organisations (FPO) and Farmers Producer Companies (FPC) has been increased. According to this press release by RBI, loan limits for renewable energy (included in priority sector in 2016) has been doubled, the credit limit for small and marginal farmers and the weaker sections (interestingly, both put in quotes) are being increased in a phased manner. The statement by RBI contextualises these changes stating that the changes are made to “align with emerging national priorities and bring sharper focus on inclusive development, after having wide ranging discussions with all stakeholders.” No one knows who these stakeholders are, surely not the farmers or the weaker sections. The truth in the statement is that the national priority is business houses, companies and corporates not farmers.

Renewable energy lending since its inclusion has been a key driver of corporate loans and this has been doubled from $150Million to $300Million at one go. Further fresh credit for installing solar or bio gas plants is also considered a priority sector to farmers, which would benefit more the companies involved in installing solar or bio gas plants in expanding their businesses, than allowing the farmers to decide as how they should use the loans for enhancing their livelihood. The practice of agriculture is not uniform across India and varies based on topographies and agro-ecology and the government should not include peripheral activities as part of priority sector loans.

Loans upto ₹5Cr for FPOs and FPCs that has assured marketing once again strengthens the companies that have longer supply chains and resources. From the experience of the pandemic, we have seen many companies buying agriculture produce at cheap rates, taking advantage of the lockdown. A reporting from food sovereignty alliance points out “private dairies slashed their purchasing prices by end February, 2020. Starting February 29th, 2020, they reduced prices from ₹30-32/litre of milk to ₹25/litre of milk. This hit many of the farmers very hard and in the Panchayat; farmers who were not part of the cooperative began experiencing the serious impact of this on their livelihood”. The Farm Acts too will put farmers at the mercies of companies that can assure marketing. It will make it easy for companies like Reliance Fresh or Adani Argi Logistics which have a stronger supply chains, resources to transport and store produce. Over the years these companies have also gained from agriculture loans when storage, machineries and export credit was also included in PSL. This is also why the farmers protests have intensified to hold sit in in front of Reliance Fresh outlets and Silos of Adani Agri Losgistics.

As mentioned before, these are not new; PSL norms have been changed several times over in the past and since the 1990s the changes have been to enable private players and businesses than small scale famers and individuals.

Some of these changes include pushing banks to achieve credit deposit ratio of 60 percent in rural and semi-urban areas by 1979, after including housing as one of the priority sector including credits for housing for SC/ST and weaker sections. Based on the recommendations of the working group led by Krishnaswamy (1980), the targets for PSL were increased to 40 percent (1985) and that 50 percent of the advances should go to weaker sections (small and marginal farmers and landless labourers and persons engaged in allied activities) (1983).  Ghosh committee (1982) recommended achieving direct agriculture lending of 15 percent of total bank credit by March 1985, 16 percent by March 1987, 17 percent by March 1989 and 18 percent by March 1990. The banks are to achieve total agriculture lending of 18 percent of adjusted net bank credit. But this approach to PSL started to shift post the 1990s.

The study by Ramakumar and Pallavi Chavan in 2013 found out that Urban and metropolitan branches of these banks accounted for agricultural credits. It also highlighted that the share of direct agricultural loans worth less than ₹25, 000 from scheduled commercial banks reduced from a share of almost 23% in 2005 to just 4.3% in 2013 but ₹1 crore rose from 7.5 % in 2005 to 10% in 2013. As the credit of large scale loans to agro industries was on the rise, the credit to small and marginal farmers stood at 4.3%. In a response to The Wire’s RTI, SBI Mumbai zone stated that the Mumbai City branch has given out ₹29.95 crore in loans to three accounts as agricultural loans. It further revealed that the same branch, have been given more than ₹27 crore in loans to nine accounts. It also found out state-owned banks gave out loans worth a whopping ₹58,561 crore to just 615 accounts in 2016. Such large scale loans to industries helps banks to easily fulfil their PSL targets easily than giving smaller credits to farmers.

The systematic dilution of priority sector lending over last two decades along with the farm Acts will cement the corporatisation of agriculture. With the inclusion of start-ups and renewable energy within the PSL more loans will be diverted to these sectors, destroying small and marginal farmers. No amount of lies and false promises by the government can hide the fact that the destruction of agricultural sector had been a systematic one. 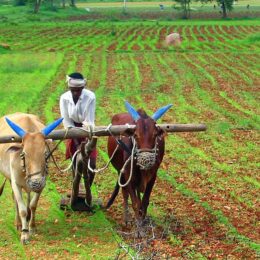