The Street Vendors (Protection of Livelihood and Regulation of Street Vending) Act, 2014 aims to protect livelihood rights and social security of street vendors but its implementation has been sluggish, putting street vendors at risk. 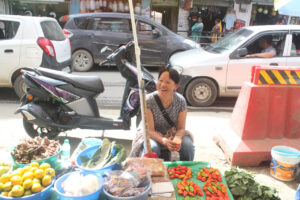 Every morning, 42-year-old Loni Yalie neatly places vegetables, fruits, dry fish and a variety of edible worms at a spot in the Local Ground area in Nagaland’s capital Kohima. After the death of her husband, Yalie has been the sole breadwinner for her three school-going children. “I don’t know how to read and write,” Yalie, who belongs to the indigenous Lotha tribe, told IndiaSpend. “So, I couldn’t have done any other job apart from street vending even if I wanted to.”

It has been nearly 20 years since Yalie began street vending. She earns somewhere between Rs 10,000 and Rs 15,000 every month, barely enough to get by. “It’s tough. But we try to adjust,” she said. She says she has come around to being somewhat satisfied with her work but that it’s a risky life, as “we are out in the streets the whole day”. 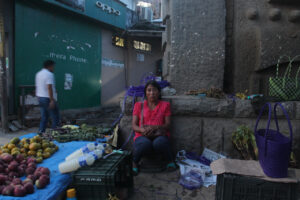 For women street vendors, it is harder, she told IndiaSpend. “On some days, unruly locals would just steal my stuff, and this is something one has to endure as a woman street vendor.” Women street vendors carry out their businesses under the fear of being evicted, and are also forced to set up their vending spaces in unhygienic locations, often without access to toilets, making them vulnerable to diseases.

Things would have been different for Yalie and many others like her, if the Street Vendors (Protection of Livelihood and Regulation of Street Vending) Act, 2014 would have been properly implemented. In Nagaland, the Act was passed in 2019. It aims to protect livelihood rights and social security of street vendors, designate zones for vending and regulate street vending across India. It also mandates Town Vending Committees (TVC), with stakeholders from municipal authorities to vendor associations, to identify street vendors, issue vending certificates, and keep records of vendors.

A 2021 report by the Standing Committee on Urban Development noted that many of the Act’s provisions, including issuing vending certificates and constituting TVCs, are yet to be implemented by several states and Union territories. IndiaSpend spoke to street vendors and social activists in Nagaland who confirm that the implementation of the Act in the state has been sluggish and its provisions largely ignored.

The number of street vendors in India is unknown, with different estimates over the years.

In 2009, the National Policy on Urban Street Vendors estimated that, in several cities, street vendors make up 2% of the population. One estimate, which cites the 2017-18 Periodic Labour Force Survey says India had 11.9 million street vendors, of which 1.2 million are women. Another estimate based on the street vendor survey in 3,257 cities and towns, by the Ministry of Housing and Urban Affairs, identified nearly 5 million street vendors. 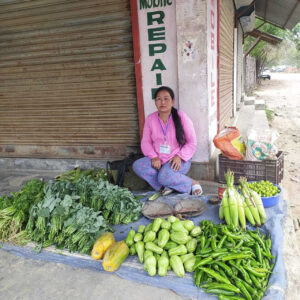 In Kohima, women vendors throng the footpaths, selling a variety of indigenous and organic food products. A survey, conducted by the Entrepreneurs Associates–a not-for-profit organisation in Nagaland–estimates that about 30,000 women are engaged in street vending local products across the state.

The Covid-19 pandemic exacerbated some of the problems street vendors face. Because of the lockdowns in 2020 and 2021, street vendors could not operate, which meant they had to dip into their meagre savings. In Delhi, a rapid assessment survey of women street vendors carried out by the Institute of Social Studies Trust (ISST) in 2020 highlighted that 97% of women vendors had completely lost their livelihoods.

Post the pandemic, vegetables at the wholesale market, where Yalie and other vendors buy produce, have become expensive, eating into their profits. Fifty-year-old Shekhozolu Vadeo, a street vendor in Kohima, said she earns so little that when asked how much money she makes, she was embarrassed to tell us.

For Atholo Ezung, another street vendor in Kohima, the main problem is that post pandemic, she has been unable to sell her produce. “Some days it can be Rs 2,000 and on other days, it’s as low as Rs 250-300.”

On a humid September morning, Vadeo sat on one corner of the street below the footpath at Local Ground in Kohima. Like Yalie, Vadeo, a single mother, sells fruits, vegetables and a variety of worms.

Summer, from March until May, is humid in hilly Kohima. Many vendors IndiaSpend spoke to said that this year, even September was more humid than usual. “No proper shed, no concrete structure, the sun is too harsh,” Vadeo said, adding that it’s worse during the monsoons. “During rains, there is always a chance that my stuff will get damaged.”

About 62 km away from Kohima is Chümoukedima town–an important urban centre in Nagaland. At Chümoukedima, IndiaSpend spoke to Atoli Sema, another street vendor, who has been vending for 17 years at the market. Forty-five-year-old Sema was formerly the vice-president of SEWA (Self-Employed Women’s Association) in Nagaland. She is currently serving as an advisor to SEWA, Nagaland.

In Chümoukedima and the nearby town of Dimapur, summers are hotter and more humid than Kohima. “We don’t have a vending shed, it’s too hot for us to sit here the whole day,” Sema, a registered street vendor, said.

At Chümoukedima market, Sema says, 70-80% of the vendors sit outside on the pavements and streets. “We have complained to the urban development authority. They keep telling us that they will arrange for a protected shed but they have not done anything so far.”

Some areas have proper sheds where women street vendors are comfortable, says Neikule Doulo, head of communications at Entrepreneurs Associates in Kohima. “But there are more vulnerable women who come from neighbouring villages and towns. They usually sit on the streets and the municipal corporation often chases them off or asks them not to sit on footpaths and pavements.”

Ezung, the street vendor in Kohima, pointed out the lack of designated toilets for vendors, especially for women. “We have to look for hotels that would let us in or sometimes we end up not going to the toilet for hours,” said Ezung, who has been vending as far back as she can remember. Sema says that the toilets that are available are often dirty and unhygienic.

Doulo, whose organisation focuses on financial literacy of women street vendors in Nagaland and Manipur, said that some women meet good neighbours, who are kind and allow them to use their toilets for free. “But some women don’t drink water to avoid going to the toilet.”

Women vendors are more inclined to illnesses due to the shortfall of public latrines than their male counterparts, according to an article published by the International Alliance of Street Vendors. “Because of the absence of public latrines, most women street vendors experience urinary tract infections and kidney problems,” the article noted.

The lack of vending sheds and amenities continues despite the Act that requires local authorities to frame street vending plans to address matters that include identification of vending zones.

Akole Tsuhah, theNagaland State Coordinator of Northeast Network (NEN), a women’s rights organisation from Northeast India, explained that since 2013, “we have noticed that the biggest challenge for women street vendors is to secure vending spaces” where they will not be chased off from. Tsuhah added that this is important because there is still no clear demarcation of proper vending zones, which means vendors can be evicted at will.

Ummey Honey, a fellow with the National Association of Street Vendors of India (NASVI), who mainly works in the neighbouring state of Assam said that even in Assam, the Act hasn’t been implemented “explicitly”. “We don’t want the government to go out of its way but they can do the bare minimum…Many vendors are seen spilling onto the streets, which hinders traffic and the police then chases them away. It’s a cycle that keeps repeating and designated vending zones could solve the problem.”

One of the important rules, says Tsuhah, is the constitution of TVCs that represent street vendors, including women. “But that has barely been done,” she said.

Town vending committees were created in the main districts of Chümoukedima, Dimapur, Kohima, after the Act was passed in 2019 in Nagaland, Tsuhah added, but the implementation is far from perfect.

For instance, members of SEWA found that in several districts, town council officials are not aware what TVCs are, says Angunuo Miari, General secretary of SEWA Nagaland. “In urban districts like Kohima and Dimapur, they [government officials and street vendors] are aware about TVCs but in the other interior and rural districts, they are not aware of the fact that TVCs should exist.”

In Kohima, where TVCs have been set up, they do not hold the three monthly meetings they are supposed to. “Last year they conducted two but this year not even a single meeting was called,” said Miari. When SEWA members visited the Kohima municipal corporation, they were told that without any information from the ‘ministry’, they could not hold these meetings.

“In Kohima, we haven’t been able to conduct the meetings regularly because officers are busy with other work…But TVC has been set up here and just a few days back we met SEWA members and it was fruitful,” said T Lanusenla Longkumer, an administrator at KMC. The KMC administrator said that municipal councils verify and issue vending cards too. “There are so many issues in Nagaland and the municipality does not have absolute control, so we have to function and do our best within our limits.”

The 2021 Standing Committee report noted that TVCs have not been constituted in several states–“making street vendors prone to eviction”.

Honey of NASVI pointed out that 5% of TVC members should be women. But, “women’s voices are not encouraged”, she said, adding that the overallimplementation of TVCs “has been very slow”.

Further, while vending certificates are supposed to be issued under the TVCs, there is a lack of transparency around it. Sema from Chümoukedima, who has a street vendor’s ID card, said that the municipal body is issuing cards to even non-street vendors. This, she said, is mainly because many people who are not vendors are aware that under the PM SVANidhi scheme–a government micro-credit programme to help street vendors formalise their businesses–they can avail a loan of Rs 10,000. “There are original street vendors who haven’t been able to avail the loan but non street vendors are being issued ID cards,” Sema said.

The Standing Committee recommended constituting a monitoring committee to review the progress on the street vendors Act’s implementation.

“I have not come across any reviewing of the Act. The responsibility and ownership towards it are lacking,” Tsuhah said, adding that government authorities should collaborate with other NGOs, workers’ unions to implement the Act and to check its effectiveness.

We reached out to A. Chenithung Lotha, additional director at the directorate of municipal affairs, emailed the Nagaland Urban Development department, but we were unable to get in touch. We will update the story when we receive a response.

The original article published in IndiaSpend can be accessed here.