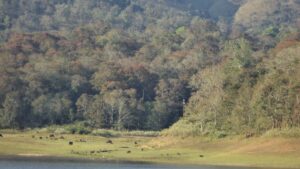 A new report has raised concerns over massive environmental clearances given to projects in eco-sensitive zones (ESZ) and Protected Areas (PA). The report has flagged that the dilution of environmental laws is a major cause behind the same.

The Ministry of Environment, Forest and Climate Change (MoEF&CC) gave clearances to 2,256 proposals, with 270 of them lying near biodiversity hotspots from July 2014-April 2020, stated the report published by Centre for Financial Accountability, a non-profit November 29, 2022.

Of the 2,592 proposals received by the MoEF&CC, 87 per cent were approved in these six years.

The National Board for Wildlife (NBWL) granted clearances to 680 projects between 2015 and 2020, stated the report titled Wildlife Clearances – Are they really serving the purpose of protecting the PAs?

“The manner in which several projects within or near PAs have been given a go-ahead by the regulators including MoEF&CC, NBWL and National Tiger Conservation Authority raises serious questions as to whose interests are being served,” said the report.

Earlier in 2019, MoEF&CC issued an Office Memorandum (OM) stating that projects outside the boundary of the ESZ of a PA but within a 10-kilometre radius will not need any prior clearance from the NBWL.

The OM nullified the previously issued OMs in 2007 and 2009, which had made the NBWL’s approval mandatory for projects within a 10 km radius of the PAs.

The NBWL is a body that aims at promoting the conservation and development of wildlife and forests. But since 2014, it has also come under criticism by wildlife experts and activists for giving clearances to projects, left, right and centre.

“When the entire nation was under lockdown, April 07, 2020, a virtual meeting was held by the Standing Committee of NBWL, where 31 proposals were discussed regarding projects inside or within 10 km of PAs,” the report added.

Out of them, a staggering 26 projects were approved. Ten of the approved projects were linear infrastructure projects such as highways, transmission lines and railway lines which cut through national parks, sanctuaries and tiger corridors.

Similarly, the other projects — spread over 3,000 acres of land located in eco-sensitive areas — were also approved.

The report analysed the clearances given by the NBWL to different kinds of projects, including those for roads, mining, hydroelectricity and thermal power in the five years.

An average of 30 projects were cleared in each of these meetings. The report said:

Similarly, in a response to another query made in Lok Sabha in February 2019, it came to light that between August 2014 and February 2019, NBWL had cleared 682 of the 687 projects which had come up for its scrutiny, which made it a staggering clearance rate of 99.82 per cent, thus earning the ‘distinction’ of a ‘clearance house’ for projects than a regulator ensuring adequate protection for the PAs.

Analysing data on the PARIVESH portal, the report found that applications for 3,622 projects had been submitted to the NBWL in the last five years, of which 185 projects had an area of more than 10 hectares (ha) of land.

Of these, 123 fall within the boundary of the PAs and 62 projects are in the buffer zone. They spread over 33,780 ha of forest land (including the buffer zones).

One of the proposals is for the denotification of 11,173 ha of land of Son Chiriaya (Hukna Bird) Wildlife Sanctuary Ghatigaon in Gwalior, Madhya Pradesh. The remaining 184 proposals are of 22,608-hectare area.

The proposals are in different stages of approval and clearance on the PARIVESH portal, with final clearances still pending.

The report added that the Union government was trying to dilute the environmental protection laws to grant more speedy clearances to such projects without hassle, which had also received backlash from environmentalists.

The Union Government had proposed amendments to the Wildlife Protection Act, 1972 (WLPA) to make a Standing Committee for State Wildlife Boards (SBWL) to exercise delegated powers and duties.

The amendment Bill was introduced in Parliament in December 2021. It was heavily criticised by the Parliamentary Standing Committee (PSC) this year in April.

The 29-member PSC was apprehensive that a Standing Committee with only official members (not more than 12) and lacking any independent members might “end up being a rubber stamp for faster clearances of projects.”

The PSC recommended that the Standing Committee for SBWLs should comprise “at least one-third of the non-official members of the SBWL, at least three institutional members (like the Indian Council of Forestry Research and Education, NTCA, etc.); and the director of the Wildlife Institute of India or his/her nominee.”

It recommended that the same composition be applicable to the NBWL as well.

“The formation of Standing Committees of SBWL without independent representation would weaken the overall process of wildlife clearance as lesser objections might be raised at the state levels,” added the PSC in its report.

Concerns had been raised regarding the composition of the NBWL board since the time the new board came into existence in 2014, especially around the lack of independent representation.

Activists had pointed out that there should be younger people on the board, along with the presence of sociologists, biologists, economists, etc.

The Standing Committee of the NBWL allowed for the diversion of 1,792 ha of wildlife habitat in PAs in the three meetings held in 2020 in the months of April, July and October, in which 82 proposals were considered, according to an analysis by Legal Initiative for Forest and Environment, a non-profit.

“Out of the 82 projects, 25 proposals were related to diversions within PAs, 23 proposals were for diversions from tiger habitats and three proposals involved denotification (deletion) of areas within a wildlife sanctuary for boundary alteration,” the analysis stated.

The remaining 31 proposals were related to diversion within the 10-kilometre radius (default eco-sensitive zone) from the boundary of the PAs, it added.

Between January and June 2021, the NBWL had approved the denotification, diversion or rationalisation (redrawing of boundaries) of over 14,000 ha of land under PAs, with some of these alterations having potentially disastrous impacts on wildlife.

“There is a dire need of looking at the cumulative impacts of these projects over multiple PAs than analysing these projects in isolation,” said the report.

This article was originally published in Down To Earth can be read here.