SBI’s project finance loans to RE projects increased by 334% 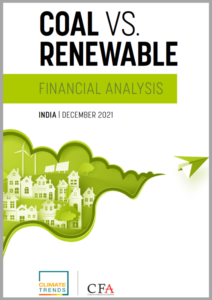 New Delhi, December 14, 2021: Coal vs Renewables Financial Analysis 2020 identifies PFC, and its subsidiary REC, as the sole state-owned financial institutions that provided project financing to coal power projects in 2020. The fourth edition of Coal vs Renewable Financial Analysis, authored by Climate Trends and Centre for Financial Accountability (CFA), found SBI was the leading financier of renewable energy projects in 2020.

Lending to coal projects continues to remain depressed. 2020 marked a slight increase in coal funding after two years of consecutive decline. However, this is still over 85% lower than the INR 60,767 crore (USD 9,350 million) this report identified in 2017.

“India’s funding trends are in line with what we are seeing globally. Finance for new coal projects have increasingly been withdrawn with international institutions moving away from funding coal fearing reputational, economical, and fiduciary risk. Federal Bank, India’s 7th largest commercial bank, announced a coal exit policy this year becoming India’s first bank to do so. PFC should follow in the footsteps of its private sector peers, move away from coal and towards renewable energy projects”, Joe Athialy, Executive Director, Centre for Financial Accountability

“Analysis shows that India needs an investment of around 38 lakh crores or USD 500 billion in this decade to reach its 450 GW of renewable energy goal. For this to happen, not just international funds, domestic financial institutions must also chip in. PFC and REC seem to be funding more coal than renewable energy, which is not in line with Central government’s stated objectives, including the commitments to phasedown coal and turn to net zero emissions in the long term. As renewables turn cheaper and easier to build, traditional institutions will realise that it is counter intuitive to keep funding more coal projects” Aarti Khosla, Director, Climate Trends

“It is encouraging to see fewer financiers for coal every year. Given the pace of transition it will be of utmost importance for policy makers and the government to ensure the millions of individuals who are dependent on coal for their livelihood are taken along and that the transition is just” Dr. Sudhir Chella Rajan,Professor, Indo German Centre for Sustainability, IIT-Madras

India’s domestic commitments far exceed its international climate commitments. Although India has announced its intention to update its Nationally Determined Contributions (NDCs) as required under the Paris Agreement, it has yet to officially submit its updated NDCs to UNFCCC. To reach 500 GW of non-fossils installed capacity, India needs to scale up its yearly capacity addition in wind and solar power. For this to happen, state owned institutions and private banks need to make available cheaper finance for renewable energy projects.

Link to the report –https://www.cenfa.org/uncategorized/coal-vs-renewable-financial-analysis/

Climate Trends is a Delhi-based data-driven strategic communications initiative that works towards building awareness around climate crisis and solutions. We focus on building the understanding of the public and the media on themes of climate change and energy transition.

Centre for Financial Accountability is a Delhi-based research and campaign organisation that focuses on sustainable and accountable financing of infrastructure projects. CFA aims to strengthen and improve financial accountability within India.

The Hidden Costs of Waste Incineration for Women 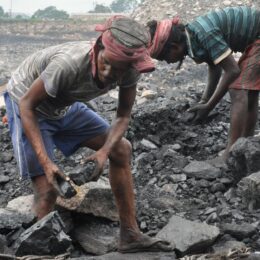 Where do Indian banks stand in the global fight against climate change?