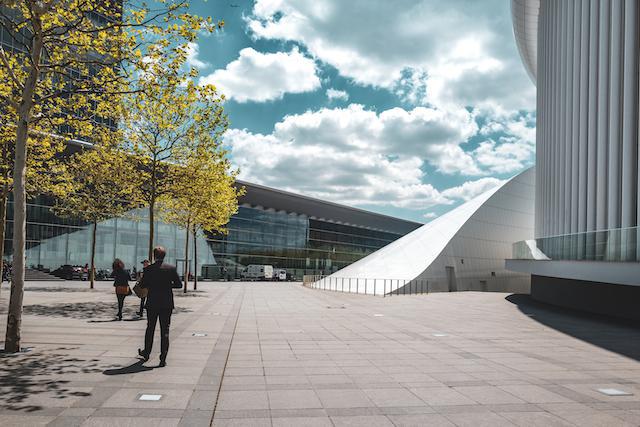 The protest will take place on Place de l’Europe, just in front of the European Convention Centre in Kirchberg, the venue of the AIIB annual meeting, on 12 July 2019 at 11am Photo: Shutterstock

As the Asian Infrastructure Investment Bank (AIIB) annual meeting kicks off on Friday, a coalition of NGOs will hold a protest to call on the multilateral financial institution to live up to its “lean, clean and green” promise.

Speakers from Luxembourg, as well as Bangladesh, India and other countries, will be on site during the protest, calling on the institution to shift to renewable investments by 2020, to ensure projects will improve access to energy for impoverished communities, and to develop a climate change action plan to step in line with the targets as set out by the Paris Climate Agreement.

“The AIIB is using European taxpayers’ money to finance fossil fuels, instead of backing a clean and green future,” Kate Geary of the Bank Information Center (BIC) Europe, told Delano. “We want our European finance ministries, who are there in the meetings this week, insist that the AIIB tackle the climate crisis.”

The coalition has put together a report and infographic to back its position, and is encouraging the public to sign a petition addressed the head of AIIB, Jin Liqun, who will be in the grand duchy for the bank’s annual meeting.

“We’re running out of time to avoid a climate catastrophe,” Geary said, “so it’s imperative that public finance should only be used to back clean energy, not subsidise dirty fossils.”

In addition to holding banners and placards, Geary says, “protestors will be wearing T-shirts saying, ‘Get you’re a$$ out of oil coal and gas!’”

On Thursday, AIIB announced it would, “for the first time, measure and offset the carbon emissions associated with the annual meeting, with the aim of achieving a carbon neutral event”.

Participants of the conference are encouraged to take part in the “act green together” initiative by logging points through the AIIB event app, and top-scoring participants will receive prizes.

The demonstration–organised by BIC Europe, along with Youth for Climate, Extinction Rebellion, Laika, Etika, NGO Forum on ADB, Centre for Financial Accountability India, Urgewald, 350.org, and The Big Shift Campaign–is open to anyone.

It takes place on Friday 12 July, from 11am-12:30pm on the Place de l’Europe, just in front of the European Convention Centre in Kirchberg, where the AIIB’s annual meeting will be simultaneously taking place.

The article, originally published on the Chinadialogue.net, can be accessed here.

Coveted IMF-WB Spring meetings conclude with a vow to fiddle; MC12 round the corner