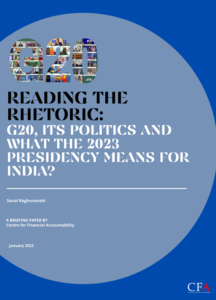 Founded in 1999,  in the wake of the Asian Financial Crisis, G20’s formation was announced by the finance ministers of the Group of Seven (G7) as the forum for international cooperation on financial and economic questions and was supposed to act as a platform to unite finance ministers and central bankers from twenty of the world’s largest established and emerging economies.  The G20 as it is known now owes its existence to the 2007-08 financial crisis. It emanated as a mechanism of crisis coordination for saving capitalism at the highest political level. Since then, the G20 has come a long way and has become the central forum for international economic cooperation. It remains one of the most high-profile convenings shrouded in enigma. While the G20, through its established forums and boards, attempts to coordinate national financial authorities and international standard-setting bodies toward developing strong regulatory, supervisory and other financial sector policies, a lot remains to be understood as to how a self-appointed body formed by some of the most advanced economies in the world collude to coordinate global capital, while at the same time leaving the majority of the world uninvolved in decision making.

As the 2023 Presidency for the G20 resides with India, this briefing paper makes an attempt at demystifying some of the contours associated with the grouping. It deep dives into the emergence and expansion of the G20 (both in terms of composition and agenda points), while presenting a commentary on its functional agendas over the years. It also focuses on G20’s self-styled relevance and the impact that this convening has on the economy, financial regulation, trade, and financial flows, basically elaborating on the global economic coordination from an economic justice lens. While iterating some issues from the 2021 Italian Presidency, the paper critically looks at some of the agenda points that should gain traction in the coming years. The paper finally presents the challenges and the agenda points that the civil society will be facing in projecting crucial issues of the third world.

Raghuvanshi, S. (2021). Reading the rhetoric: G20, its politics and what the 2023 Presidency means for India. New Delhi: Centre for Financial Accountability.

Raghuvanshi, Sonal. Reading The Rhetoric: G20, Its Politics And What The 2023 Presidency Means For India. Centre For Financial Accountability, New Delhi, 2021.

Raghuvanshi, Sonal. 2021. “Reading The Rhetoric: G20, Its Politics And What The 2023 Presidency Means For India”. New Delhi: Centre for Financial Accountability.