New Delhi: Leading trade unionists were univocal in their assertion that despite labour is extremely important within the mechanism of wealth creation, labour rights continue to be ignored.

The session deliberated on a number of critical issues around labour laws. For a government that has scrapped hundreds of labour laws in the name of ease of doing business, the pandemic is only an excuse to move India towards a near total abolition of labour laws and workers’ rights. The excuse of economic crisis (as if it was induced by the pandemic and lockdown only) is being pushed to usurp the basic rights of the working class, which have been the earning of the labour movements. At a time when the world has to move closer to gender and class parity in labour norms, India is being pushed into dark ages of feudal and colonial exploitative labour practices that will not only weaken unprotected workers of the unorganised/informal sector, but also take away the very raison d’etre of the formal sector trade unions, they lamented.

The speakers unanimously condemned the recent assault on labour laws by the state governments. They said that was done with a “malicious intent to please the employers, with little to no regard for the poor migrant workers who are already struggling hard in this pandemic.”

Speaking at the occasion, Amarjeet Kaur said, “The manner in which govt. has dealt with the working class has left them feeling cheated and betrayed. Govt. has failed the working class & it is up to trade unions to take up & address their issues.” Govt. didn’t consult trade unions, elected legislative members, experts or medical experts before imposing lockdown with little regard for the concerns of the working class and migrant workers, she added. Laying down the path forward she said, “A vast majority of workers are still outside the ambit of labour laws. The trade union movements have aimed to bring those left out brought under at least some aspects of the labour laws”.

Summing up the character of the current NDA government well, veteran trade unionist D. Thankappan said, “The workers today are up against an enemy that has no regards for unions at all and who is just interested in pleasing the employer”. The greatest shame inflicted on poor people of the country was by PM Narendra Modi and his government, he added.

“We need a law for mandatory recognition of trade unions”, Vinay Sreenivasa demanded. The contract system should be abolished. But until that happens, everyone should become entitled to a minimum wage and increased coverage, he added. Listing the key demands of trade unions, he said, “As a start demands made to the govt should include basic income support, nutritional support, urban employment guarantee act and strategies to strengthen rural economy”. He highlighted a larger danger which is engulfing not just the workers, but the socieity as a whole. “The communalisation of worker-community by the right wing groups is a major problem. If we don’t act on it, the workers will be divided”, he warned.

The webinar was part of series: Re-Imagining the Future: Peoples’ agenda for a Post Covid Economy, organised by a number of people’s movements, trade unions, and civil socieity organisations. 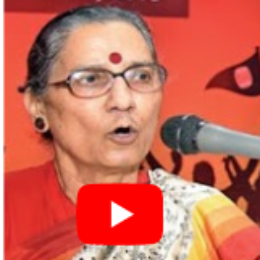