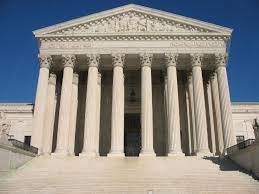 The Supreme Court today turned down an appeal from a fishing community to review its lawsuit that seeks to hold an arm of the World Bank liable for environmental damage from a coal-fired power plant in India.

Justices declined to take up the Indian villagers’ request to hear Budha Ismail Jam v. International Finance Corp., in which lower courts found that the IFC was shielded from the lawsuit under the Foreign Sovereign Immunities Act, which protects international corporations from being challenged in American courts for their conduct overseas.

The denial, announced in an order list this morning, noted that Justice Brett Kavanaugh took no part in the case. Kavanaugh was involved in earlier proceedings in the case as a judge of the U.S Court of Appeals for the District of Columbia Circuit. The Supreme Court rejects most petitions that come its way.

Budha Ismail Jam and other residents of a fishing village on India’s Gujarat coast originally sued the IFC, which is part of the World Bank, in 2015.

The challengers argued that the international bank had funded the Tata Mundra coal-fired power plant without ensuring that the facility would comply with environmental standards.

As a result, the villagers alleged, the plant polluted nearby water, decimating their fishing catches. They also complained of respiratory problems from years of breathing the plant’s airborne ash.

The IFC welcomed the Supreme Court’s decision to reject the case, noting the agency operates in more than 100 countries and finances projects in some of the “world’s most challenging places.”

It said the decision reaffirms IFC’s immunity from such lawsuits, “which will allow us to continue to deliver on our mandate to improve economies, create jobs and alleviate poverty, especially in times of a global pandemic.”

A spokesperson for the IFC said the agency takes accountability seriously, adding that over the last several years, it has made internal changes, including policy reforms.

“We continue to strengthen the application of our environmental and social standards, in consultation with civil society and other stakeholders,” the spokesperson said.

EarthRights International, which represented the Indian communities, noted the IFC had announced a series of reforms in recent years, prompted in part by the lawsuit.

It said the reforms, including changes to environmental and social reviews, are “important but remain insufficient as they fail to address past harm.”

EarthRights general counsel Marco Simon said the case “remains a black stain on IFC’s reputation as a supposed development organization. Far from reducing poverty, IFC’s actions left these communities worse off. The IFC still has a legal and moral obligation to address the harms inflicted by this plant.”

He noted that despite the court loss, “our clients have sent a clear message that institutions like the IFC are not, as they once believed, above the law. Other communities may follow suit if IFC is not careful.”

Simon said the Indian communities would “continue to fight for justice. They don’t have the luxury of giving up.”

The Indian communities’ case had taken a long and winding path that included a stop at the Supreme Court in 2019.

The D.C. Circuit ultimately dismissed the suit last year after concluding that the IFC was protected under the Foreign Sovereign Immunities Act (Climatewire, July 7, 2021).

Bharat Patel of Machimar Adhikar Sangharsh Sangathan (Association for the Struggle for Fisherworkers’ Rights–MASS), one of the plaintiffs in the case, said that although it was disappointed with the decision, “it does not mean IFC is innocent.

“IFC has never denied its role in the harms alleged in this case, and no court has ever held that IFC is not responsible for those harms,” Patel said. “The IFC’s own accountability mechanism has repeatedly called for IFC to remedy the harms in this case. But because IFC refused, the communities were left with no choice but to file suit.”

EarthRights said the case marked the first time that community members who say they were injured by an IFC-financed project had brought the institution to court.

The group sued the IFC in 2015, challenging its claim that it has “absolute” immunity from suit in U.S. courts. The case went up to the Supreme Court, which ruled in 2019 that international organizations like the IFC and World Bank Group weren’t necessarily shielded from litigation (Greenwire, Feb. 27, 2019).

The villagers then argued their claims could proceed under a “commercial activity” exception to immunity. The lower courts ruled, however, that because the IFC’s borrower acted in India, the agency could not be sued in the United States in this case.

The original article published in E&E news can be accessed here.