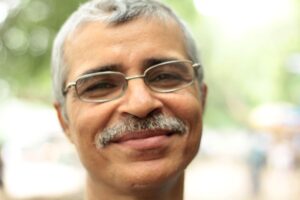 In the passing away of Vimalbhai on August 15, CFA lost a friend, comrade and fellow traveller.

A tireless campaigner, poet, artist, a go-to-person for every protest in Delhi for people’s movements across the country, Vimalbhai was a multifaceted activist. Every movement he got involved with, be it Tehri dam, Bati mines, Narmada or Korigaon, they accepted Vimalbhai as one among them. 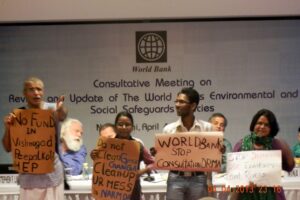 In 2013, when the World Bank conducted its consultations to review their Safeguard Policies across the world, they planned three consultations in India. The Delhi and Bengaluru ones were disrupted by activists, demanding better representation of people affected by bank-funded projects and not letting them go ahead with the facade of consultation, the Bhubaneswar one saw protests outside the venue. Vimalbhai led the protests in Delhi.

World Bank faced protests in many dam projects they financed in the country. Late 90s the World Commission on Dams initiated by the World Bank and World Conservation Union (IUCN) concluded that “…in too many cases an unacceptable and often unnecessary price has been paid to secure those benefits, especially in social and environmental terms, by people displaced, by communities downstream, by taxpayers and by the natural environment.” There was a growing resistance against mega-dams across the globe. A combination of many such factors led to the World Bank not financing dams in India. It must be poetic justice that the Vishnugad Pipalkoti Power Project, where Vimalbhai was deeply involved for many years, is the last dam that the World Bank financed in India. With a massive string of dams planned in the North-East of India, it may not be the last dam the Bank wants to finance. But the experience in Narmada and Vishnugad Pipalkoti will make them think twice before investing in those new projects.

A true environmentalist, Vimalbhai lived a simple and non-consumerist life. At a time when global institutions are forcing the language and path of aggressive development and growth model, he truly believed in the ideas of non-consumerism, de-growth and preserving the natural ecosystems and environment. Today, we deeply miss Vimalbhai but he and his life will continue to inspire us in our struggles against mindless development, destruction of the environment, human rights violations, fascism and more.