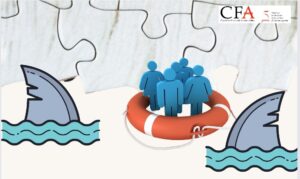 In her last budget speech in 2021, the Finance Minister declared the government’s disinvestment plans for the Life Insurance Corporation of India (LIC). Already, amendments to the LIC Act have been made to set in motion the LIC IPO. This has triggered panic waves across the large sections of ordinary policy holders who are anxious about their life’s savings. It has also led to widespread criticisms and protests from economists as well as the LIC employees.

While a full scale analysis of the many ramifications of the LIC IPO may go into pages, the attempt here through the Dashboard is to demonstrate the sheer size and scale of operations of LIC in the life insurance sector, and in that context try to fathom as to who stands to gain if LIC loses its grip over this market.

It is of immense significance to note that even after more than twenty years since private players were allowed into the insurance market, the LIC continues to remain the biggest player in the sector by far. Though it has seen its market share shrinking over the years, but as is evident from the Annual Report of IRDAI, LIC still holds a whopping 64.14% market share while all the remaining 23 private sector insurers together has a market share of 35.86%. LIC also has 66.17% and 62.53% of market share in new business premiums and renewal premiums, respectively. LIC alone issued 74.57% of all new policies under individual business in the year 2020-21. And while the claim settlement ratio of private players came down marginally from 97.18% (in 2019-20) to 97.02% (in 2020-21), the claim settlement ration of LIC in fact improved from 96.69% in 2020 to 98.62% in 2021. Now let’s add to this also the fact that while the share of offices of private life insurers are concentrated disproportionately in the Tier 1 cities, the penetration of LIC is relatively more well spread out in the smaller cities. 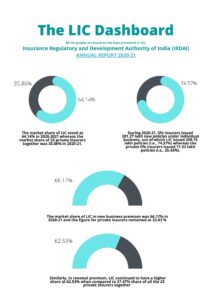 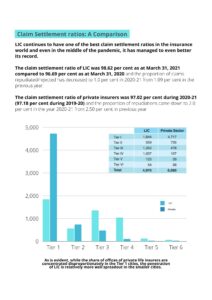 Amanulla Khan, the former president of All India Insurance Employees’ Association, supplies some more irrefutable data only to highlight the sheer volume at which LIC has been operating over the decades. He writes, “With a policyholder base of over 40 crore, it has touched the lives of tens of millions of Indian households. The assets under management of LIC are a whopping Rs 38 lakh crore. It generates annually Rs 4-5 lakh crore as investible fund. It has paid to the government cumulative dividend amounting to over Rs 28,695 crore since inception.”

It is in this context that the government is preparing the ground for offloading a 10% stake in LIC through an IPO. While there are plenty of voices who have welcomed this step as a testament to the government’s commitment towards its disinvestment goals, there are also a range of apprehensions that has been sounded. In this light, it is probably pertinent to ask as to why should the aam aadmi be even bothered?

One such door of apprehension has been thrown open by veteran journalist V Sridhar as he attempts to answer precisely this. In his opinion, LIC has over the decades acted as a provider of social security cover for millions of policy holders from disadvantaged backgrounds.

The People’s Commission on Public Sector and Public Services in its statement on the LIC IPO states that “For the year 2020-21, the average premium of a policy (referred to as “ticket size”) sold by LIC was Rs.16,156, while for the private sector it is Rs. 89,004. Significantly, in 2019-20, the average ticket size of LIC’s policies was Rs.23,871, while for the private sector, it was Rs.76,804, indicating that while the LIC operates across the market, catering to those with low incomes as well as those who are wealthy, the private insurers have remained content with picking the low-hanging fruits.” So, while there has been a “declining trend in the case of LIC’s ticket size”, the same for the private sector has been on the rise. “This shows how LIC’s social security cover came in handy for the low-income households affected by the economic downturn, whereas the private insurers shifted their coverage towards the more affluent sections.”

These millions of small policy holders have been the main bulwark of LIC and for them what matters most is the fact that LIC has continued to remain the most successful and trustworthy public sector financial institution. So, it is ethically dubious to make fundamental amends to the LIC’s character without taking into confidence its policy holders. After all, despite the government being its sole owner, it in fact, has not contributed any additional capital for the expansion of LIC’s business after the initial investment of 5 crores way back in 1956. The entire growth and expansion has been funded by the policyholders’ money. The LIC is also unique in its character, given that for all these years it distributed its surplus to the government and the policyholders in a 5:95 ratio. All of this contributes towards the immense credibility that LIC enjoys and has cemented over the decades among its policy holders.

As apprehended by V Sridhar, it is precisely this credibility that is at stake today with the IPO coming into the picture. To start with, the amendments in the LIC Act would change the 5:95 ratio to 10:90 yielding less surplus to the policy holders. The amendment requires LIC to bring down the distributable surplus, in line with the industry practice, and increase the share to the government to 10% from 5% by 2025.

The IPO, it is apprehended, will enhance the role of private investors in deciding the fate and character of LIC. Being largely profit-driven, the private investors can change the fundamental objectives of LIC including its outreach in rural areas and among marginalized sections. Also, the composition of policy holders may also shift from being smaller policy holders to large depositors.

Unlike most instances of privatization of public sector units wherein the ownership itself undergoes change, in this instance the IPO is going to fundamentally alter the character of LIC even though the ownership would remain with the government, for the time being. In this instance it is the credibility of LIC that will take a beating which will directly impact its market share. While the small depositors will increasingly be pushed out from the market, the diminished share in surplus it can offer (95 to 90), will take away the competitive advantage of LIC in the insurance sector.

Given LIC’s present scale of operation and the sheer market presence of the insurance behemoth, as is evident from the above dashboard, it is not difficult to guess who benefits from a bleeding LIC. It is the other private players in the insurance sector who so far are unable to gain any substantial footprint given LIC’s looming presence. In the name of a “level playing field”, the IPO is going to open the floodgates for a takeover of the insurance market by private players. The ones on the receiving end will be the small depositors, for whom LIC so far has served as a much-needed social security cover.

This is just one among the many apprehensions that economists and LIC employees have been raising while challenging the move towards the LIC IPO. It is crucial that we closely follow the concerns around this fateful move and build a credible opposition to it among the policyholders whose interests are going to be hampered the most. 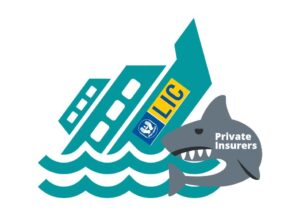 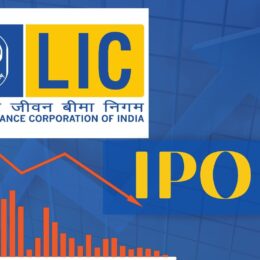 PIL against LIC IPO; the beginning of a significant battle for people’s welfare 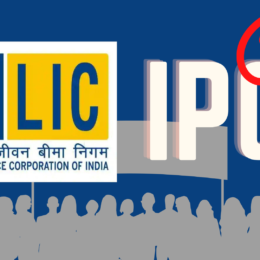 LIC IPO is a scandal, SEBI, IRDAI and the Supreme Court must intervene! 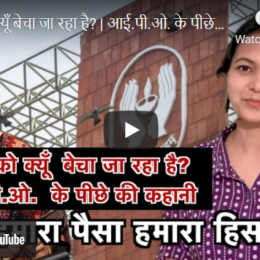