The Global Hunger Index 2022 relies on India’s official data in two of the four indicators, and gives extra marks in the third, while for the fourth, it relies on FAO’s survey as India has no data! 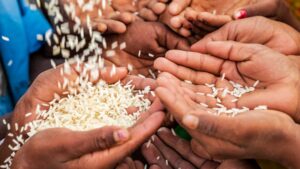 India has been crying foul so often in response to adverse global assessments for so long that it is easy to ignore, but here is a case in which it is not only doing a disservice to itself but ridiculing its own methodologies, data and competence.

This is about the Global Hunger Index (GHI) 2022, released last Friday, in which India’s rank slipped to 107 from 101 in 2021, among 121 countries. India remains among countries where hunger is “serious”. Its overall score slipped from 27.5 in 2021 to 29.1 in 2022 (on a scale of 0 to 100 where 100 represents maximum hunger). Just as in 2021, India fared worse than some of the known poor countries in the world, like Rwanda and Kenya, and neighbouring Bangladesh, Pakistan, Nepal, Sri Lanka and Myanmar, except Afghanistan.

The GHI is based on four indicators – undernourishment of the population, child stunting, child wasting and child mortality (under 5). India’s response to the latest finding was the usual trope. It variously described it as “erroneous”, “suffers from serious methodological issues” and an attempt to “taint” India’s image.

A look at the report shows that the GHI is actually using India’s official data, that of the National Family Health Survey (NHFS) of 2019-21 released this year, for two of the four indicators: (i) child wasting at 19.3%, which the GHI said was “world’s highest child wasting rate” and (ii) child stunting at 35.5%. For (iii) child mortality, the GHI put the score at 3.3% – which is way better than the NHFS-5 data of 41.9 per 1,000 live births (or 4.19%) released in August this year. But India didn’t appreciate (or dispute) the extra marks.

The GHI uses a Food and Agriculture Organization (FAO) survey to say that 16.3% of the Indian population is undernourished. India objects to it, saying that it was based on a small sample size of 3,000. But does India have any such data? The answer is “no”. It never had. So, why cry foul? If serious, India should carry out its own survey.

As for the first three indicators (child wasting, child stunting and child mortality), India says these are indicators for “health of children and cannot be representative of the entire population”.

This is ridiculous. Not just India but the world maps these indicators, of course along with others like infant mortality, institutional births, maternity mortality etc., to know about the health of the population. If India indeed has objections, it should develop alternate methods and provide data for the entire population to prove its point.

It is also unfortunate because India is overlooking GHI findings year after year. Had it been, it would have several lessons and taken corrective measures.

One is that the rate of reduction in hunger slowed down in India between 2012-2021, while other poor countries mentioned earlier continued their sharp declining trends – thus, overtaking India in performance and ranking. If the trend was reversed in 2022 GHI – the overall score of India jumped from 27.5 in 2021 to 29.1 in 2022 – it was because of certain developments and it happened to many countries. For example, among the countries mentioned only Myanmar recorded improvement and Nepal maintained its score while others fell. The GHI attributed this reversal in many countries to three factors – (a) climate extremes (ii) violent conflicts (not the Russia-Ukraine but in Africa, Syria etc.) and (iii) economic downturns including those caused by the COVID-19 pandemic.

Besides, India’s fall in ranking and the reversal in the hunger index are quite in keeping with the World Bank’s recent report which said India contributed 79% to the world’s “extreme poor” – to which India didn’t react at all.

Another insight from GHI 2022 is about how Chhattisgarh, Gujarat, Odisha and Tamil Nadu reduced child stunting between 2006 and 2016. It attributes this to three factors: (a) household conditions (such as socioeconomic status and food security) (b) improvements in the coverage of health and nutrition interventions and (c) maternal factors (such as mothers’ health and education). It also said that there is a need for “contextualized policy and programmatic initiatives”. The Indian government has no time or appetite for such policy nuances.

True, India is providing additional “free” ration since April 2020, but clearly, that is not enough to address hunger or poverty – not in long-term in any case. 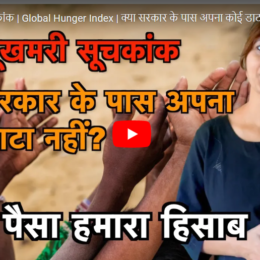 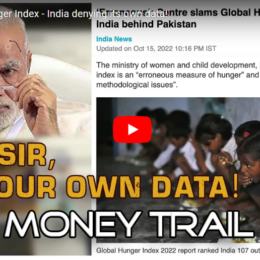 The Global hunger Index – India denying its own data!