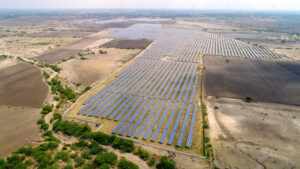 The World is looking at a transition from energy production using fossil fuels to renewable energy sources i.e, Wind, water and solar (WWS) in order to achieve the carbon net zero targets. India too has committed to achieve the carbon net zero targets by 2070 at COP 26. It has also set an objective of generating 500GW of power from non-fossil fuels by 2030, out of which 450GW is to be generated using renewable energy sources. A move to renewable energy is the need of the hour but in order to achieve this in a truly sustainable manner, there must be consideration of several aspects. One of which is to reduce the ecological damages that are incurred during the setting up of large utility-scale solar parks.

An article published back in 2009, based on a study conducted by Stanford university, gave insight into a complete transition from fossil fuel energies to renewable energy sources by 2035 or the latest by 2050. In the article, the plan put forth was to harvest 51% of wind energy and 40% using solar energy. Out of the 40%; to be generated using solar plants; 30% should be harvested from solar panels set up on homes and commercial buildings. This is very crucial when it comes to setting up a sustainable system. Covering large tracts of land for setting up of large scale utility parks leads to a huge loss of biodiversity in that area. In India, setting up of solar parks does not require environmental clearances as it is not covered under the EIA notification of 2006, so there is no detailed study done to see the extent of environmental and social impacts these parks have on the local biodiversity and on the local communities before these parks have been approved. 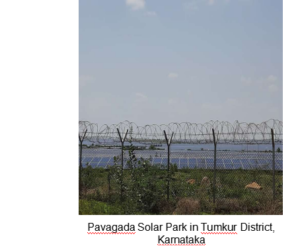 Taking the example of the Pavagada solar park in Karnataka, India, this is one of the largest solar parks in the world that produces 2050 MW of electricity and covers an area of about 13000 acres. Most of this 13000 acres were agricultural lands;those were taken on lease for a period of 28 years; and commons which were used as grazing pastures by the local community. It also allowed for free movement of wildlife from the nearby sanctuary, called the Jayamangali Blackbuck reserve. These open tracts of land have been fenced for the solar park which leads to fragmentation of the local fauna’s habitats. Pavagada is one of the last places which hosts a decent number of Indian Grey Wolves. With such habitat degradation we could see the extinction of this species just like how Cheetahs, that once freely roamed the plains of southern India, went extinct. The neighbouring forests also host a healthy population of Black Bucks and other endangered species. Open tracts of land acted as groundwater replenishers which not only helped the local flora and fauna but also the agriculturalists. Concretising and fragmenting such eco-sensitive lands will degrade the land to such an extent that post the lease period, it truly will be a wasteland as cultivation of any sort will not be possible. Therefore, it’s crucial for renewable energy setups to look at sustainable measures to ensure whether it helps the local flora and fauna to thrive.

The other aspect to consider is the production of equipment required for tapping these renewable resources. Production of many of the components required for solar panels and turbines are rare earth metals such as neodymium, dysprosium etc.  Mining of these materials is at a very minimal rate at the moment, so there is ample extraction in demand at the moment. But if the demand for such materials increases due to the push for achieving targets set by different countries, it might not be sufficient. This could lead to over exploitation of natural resources in order to meet the demands. They are found abundantly in the environment but at very low concentration so it is not economically feasible to extract them. The energy utilisation during the extraction process of these resources are very high as well and it is very harmful to the environment. Recycling of these metals is difficult and hence newer technologies need to focus on efficient methods in order to ensure sustainability. Taking the example of manufacturing of solar panels, China is one of the highest exporter of solar panels in the world at present. There are two main concerns here, one is the high carbon emissions that are reported in the production of these panels which are said to have double the carbon footprint when compared to the panels produced out of Europe. Secondly there are several reports of forced labour being employed for the production of these panels in Xinjiang, which is a huge violation of human rights. Countries like the US have banned the import of solar panels from China whereas several other countries continue to import the solar panels out of China due to the lower costs.

Lifespan of the equipment used also needs to be considered as there needs to be efficient methods to dispose, recycle or reuse them. Many of these components are toxic and it is evident that there is going to be a surge in demand for these, thus in a few years to come there is going to be huge amounts of waste and unused parts that are going to be generated. Hence it is very critical that waste management and recycling of all these equipment be looked at very carefully otherwise even in the name of ‘green projects’, the environmental damage going to be done will be dangerous.

Renewable energy is the future and the best alternative as of now, to help mitigate the horrendous impacts of burning of fossil fuels. Talking about the way forward, engaging local communities in and around proposed development sites is critical. Agri Voltaics in place of ground mounted solar installations is one way in making sure a healthy development of such projects which would not only help local farmers to cultivate on their lands, but also help combat the higher temperatures and lesser water retention of the soil as studies have shown. Another solution is to avoid covering wide open spaces with panels and other concrete structures, rooftop solar installations have huge potential that would help tap enormous amounts of energy to help attain the targets of various countries. Decentralised renewable energy projects are also key in ensuring that generated power reaches all parts of the country and helps to address the needs of remote areas. This would also help in cutting the transmission costs and losses. Hence, these aspects need to be critically analysed and implemented in order to ensure that green projects are truly green indeed.

Anirudh Menon is a Research Associate with the Environment Support Group