Soumya Dutta traveled to Sharm El Sheikh, Egypt, to participate in the 27th Conference of Parties (COP-27) of the UNFCCC. 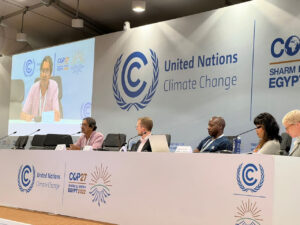 Along with participating in a host of meetings & public protests and speaking with journalists and activists present there, he also spoke in two important meetings- on False solutions and Global Carbon Bombs. Here he charts the most important takeaways from COP-27. 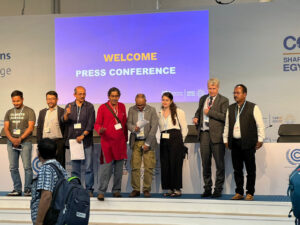 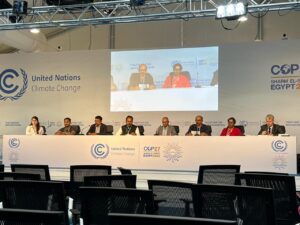 A positive outcome first: a decision on the loss and damage fund

However, this gain is insufficient to compensate for the other setbacks in the negotiations (described below), which will accelerate these losses.

As a result of actual changes in many Earth systems, such as changing South Asian monsoon patterns, massive unseasonal fires, long-drawn heat waves, unprecedented flooding, and so on. Adaptation to these changes becomes extremely important for affected and vulnerable communities all across the country. The parties at COP-27 finally agreed on establishing a framework for the Global Goal on Adaptation (GGA) through the Glasgow Sharm El Sheikh Work Program (GlaSS), but the actual consideration and possible adoption of this is to be taken up at COP-28, next November or December in Dubai. Countries like the USA and Switzerland put up some roadblocks even to this, but finally this small gain was pushed through. Despite this GGA being established, there is no commitment or even clarity about where the financing for this will come from or through which modalities, thus rendering this a dead duck as of now.

Encourage the use of numerous erroneous solutions: Just as the COP-27 convened, the Advisory Committee on Article 6 of the Paris Agreement (articles 6.2 and 6.4 refer to market mechanisms for mitigation, which are a sham as many of our studies have revealed) “approved” the dangerous “Ocean Carbon Dioxide Removal” method of ocean fertilisation for carbon markets.

This is despite the fact that, at scale, pilot projects of ocean fertilisation (led jointly by Indian and German research institutions in 2009) have failed to show significant positive   sequestration. Ocean CDR, if supported by large amounts of market capital, will enable risky, large-scale experimentation in our oceans and seas. The overall push for “offsetting,” carbon markets for mitigation, etc. continued though, with increased focus on shifting away from actual emissions reduction to market-based mechanisms that do not actually reduce, as shown over the last decade and more.

After huge protests and a strong stand against this taken by some countries, the proposed “approval” for Ocean CDR was sent back to the Advisory Committee with a 2-year timeframe to do better groundwork. The danger still remains. 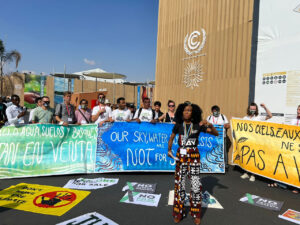 The COP-27 happened under the shadow of massive human rights violations, the brutal suppression of all dissenting voices, and curtailment of rights for even the civil society participants in the COP-27 (the “observers” in UNFCCC terms). We were clearly told that we could not name any country or company in any of our presentations! Outside the venue, protests and even gatherings were strictly prohibited. The searching and questioning of many civil society activists happened on both inward and outward journeys. The references to human rights, indigenous people’s rights, etc. were omitted from some texts.

Despite these, civil society found ways to counter and respond to the massive human rights violations by the dictatorial Egyptian government. Finally, on the 17th of November, the People’s Plenary reverberated with calls like “Free Ala, Free Them All.” This was defying the unjust and authoritarian restrictions that they tried to impose.