India remains home to most poor people in the world, its per capita income is well below the global averages and it added the maximum (79%) to the global “extreme poor” during the 2020 pandemic. 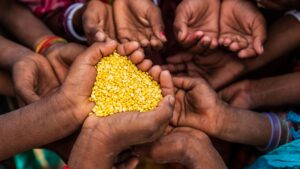 Two days after the Indian government announced “free ration” for 813.5 million Indians, Prime Minister Narendra Modi told the nation, in his monthly radio talk “Mann ki Baat” on December 25, 2022, that the country entered “Amrit Kaal” (golden period) in 2022 with tremendous economic progress. He said: “2022 has indeed been very inspiring, wonderful in many ways. This year India completed 75 years of her independence, and this very year Amritkal commenced. This year the country gained a new momentum…India attaining the status of the world’s fifth largest economy…”

Since 2013’s National Food Security Act (NFSA), 75% of rural and 50% of urban households (62.5% households in all) are entitled to and getting (since 2014) “subsidized” food grains: (i) 5 kg of grains per month for each member of “priority households (PHH)” and (ii) 35 kg of grains for each Antodaya Anna Yojana (AAY) beneficiary, at Rs 3 per kg for rice, Rs 2 per kg for wheat, and Rs 1 per kg for coarse grains. Since April 2020, immediately after the pandemic lockdown was announced, these very families were given an additional 5 kg of “free” ration per member under the Prime Minister Garib Kalyan Anna Yojana (PMGKAY), doubling their entitlements.

Initially meant for three months, the “free” ration under the PMGKAY, over and above the NFSA entitlement, was a temporary relief to the poor stuck due to the national lockdown and curfew; it was extended until December 31, 2022 – the last extension being in September 2022, just ahead of the elections in Gujarat and Himachal Pradesh. The last extension came despite strong objections from the Finance Ministry. Now, this “free” ration has been withdrawn, but the entire “subsidized” NFSA entitlement has been turned “free” for one year, from January 1, 2023, to December 31, 2023. According to official estimates, the subsidy outgo on food was Rs 3.91 lakh crore up to December 2022; the change will cost Rs 2 lakh crore, thus making substantial savings for the government.

But as the next general election is due in April or May 2024, this “free” NSFA entitlement is more likely to be extended well into 2024.

What happened to “revdi culture,” this waste of taxpayers’ money?

Quite clearly, the Prime Minister, who sparked a country-wide debate over “revdi culture” (freebies) in July this year to target opposition parties promising “free” benefits to the electorate to win elections – into which even the Supreme Court and the Election Commission of India were sucked without producing any tangible results – doesn’t mind giving freebies of his own.

“Free” ration is an official admission that most Indians are too poor and need help, and hence, is not a bad idea, but to target opposition political parties for similar help to the poor is not defensible. The Prime Minister even told the nation in October 2022 that taxpayers don’t like wastage of their money through freebies, which made them “unhappy” and hence, he wanted this culture to end.

He, however, kept quiet when his party, the BJP, was promising more “revdi,” or freebies, in Gujarat and Himachal Pradesh at the same time, during the run-up to the polls (held in November and December 2022). The BJP’s “revdi” included “free” education, electric scooters and cycles to all female students, two LPG cylinders to all households in Gujarat, “free” bicycles and scooters to all female students, a sum of Rs 1,500 a month to all women in the age group of 18-60 years, and even “free” electricity up to 300 units in Himachal Pradesh.

India is home to most of the poor, further impoverishing them.

“Free” food for 62.5% of the population is not the only evidence of the failure of Prime Minister Modi’s promise of “achhe din aane waale hain” (good days are coming) days before assuming power in May 2014.

The World Bank’s October 2022 report, “Poverty and Shared Prosperity 2022,” said India added the maximum number of “extremely poor” (a per capita per day expenditure of $2.15 at 2017 PPP) to the world population during the pandemic of 2020. While the world saw 71 million people slip into extreme poverty in 2020, India alone added 56 million to it – 79% of the total!

Despite becoming the fastest growing major economy on the basis of 8.7% GDP growth in FY22, Indians are impoverished. The same fiscal, the per capita income was actually -0.53% lower than the pre-pandemic FY20 (at constant prices). The GDP data further reveals that from a peak of 6.9% in FY17, the growth in per capita GDP fell to 2.7% in FY20 before collapsing to -7.6% in FY21 and then recovering to 7.6% in FY22 from that low base.

It would be wise to remember here that the GDP includes incomes from both households and non-households like the central and state governments, private corporations, partnership firms, trusts, etc. So, the per capita GDP data also includes those non-household incomes and presents a misleading picture. If those are taken out, the per capita income of individuals will come down significantly. The true picture emerges from the consumption expenditure survey, which India hasn’t done since 2011–12. The 2017–18 survey was junked because it showed Indians are consuming less, or getting poorer.

Even before the pandemic struck, India was home to the most poor people in the world.

Going forward, India may indeed become the third largest economy by 2019 by overtaking Japan and Germany, as a recent SBI research paper said, which was endorsed by Finance Minister Nirmala Sitharaman at the US Chamber of Commerce’s US-India Business Council (USIBC) meeting too when she said: “Today, fifth; soon, third…”. But how sound are the economic fundamentals of India?

The RBI’s Monetary Policy Committee (MPC) member Jayanth R. Varma said earlier this month that he feared that India’s “economic growth is now extremely fragile.” He reasoned that all four growth engines (exports, government spending, private investment, and overall capex and private consumption) are suspect: (i) “Exports cannot be the main driver of growth because of the global slowdown.” (ii) “Government spending is necessarily limited by fiscal constraints.” (iii) “Experts are waiting for many years for private investment to pick up” and “concerns about future growth prospects appear to be deterring capital investment,” and (iv) “the critical question is whether the fourth engine of private consumption will remain buoyant after the pent-up demand dissipates over the coming months.” The GDP data show the growth in private consumption (PFCE) fell from a peak of 6.8% to 4.1% in pre-pandemic FY20. In FY21, it fell to -7% and then recovered to 6.9% in FY22 from that low base.

Given such evidence, does the “Amrit Kaal” point to a golden period of India’s growth and prosperity?