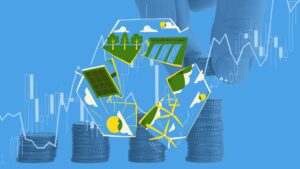 The latest Reserve Bank of India (RBI) survey on ‘Climate Risk and Sustainable Finance’ points to the long road that commercial banks in India need to traverse in order to make their lending portfolio instrumental in the global response to the climate crisis.

The survey points out that hardly any banks incorporate performance indicators related to environment, social and governance (ESG) criteria in the evaluation of their top management. Most banks don’t have a separate vertical in their administrative structure to consider ESG-related initiatives and sustainable finance, nor were they able to present a clear strategy towards amplification of their sustainable finance portfolio or responding to climate risk.

The survey, conducted by the Sustainable Finance Group (SFG) of the Department of Regulation at the RBI, had the participation of 16 private commercial banks, 12 public sector banks and six foreign banks. Based on the survey, the SFG recommends capacity building and incorporation of climate-risk assessment as part of the banks’ governance framework, and advocates larger shares of the lending portfolio towards green financing.

This survey assumes added significance as it comes at a time when the Indian government has made ambitious commitments at the global level, typified by Prime Minister Narendra Modi’s panchamrit agenda announced at the COP26 climate talks in Glasgow last year. Specifically, the country has pledged to reduce emissions by 45% by 2030 and achieve net-zero by 2070.

Climate finance is at the heart of all these targets, which require transitioning to renewable energy and investments in alternative infrastructure, which in turn makes financial institutions like banks central to this endeavour.

The RBI’s initiative to take stock of ESG measures adopted by banks is welcome and allows us an opportunity to understand a rapidly evolving field at the intersection of climate change, finance and policy.

Banks at the hearts of development and climate finance

RBI’s discussion paper based on the survey rightly emphasises the “increasing need for the financial system to move towards green financing, keeping in mind the social and developmental objectives of the country”.

While the recognition does not lead to the prescription of any mandatory policy measures, it is significant in the Indian scenario, where climate finance is nearly absent from the national discourse. This is also doubly ironic – on the one hand because a vast section of India’s population directly bears the health and economic consequences of fluctuating temperatures, eroding coasts, melting glaciers and toxic air, but on the other, movements in India have played a pioneering role at the global stage in establishing the social and ecological accountability of banks for the ‘development’ projects they fund.

An oft-cited example is of the movement against the Sardar Sarovar Dam, which compelled the World Bank to withdraw its funding in view of the project’s disastrous consequences of the project. The central role of the financial sector in intermediation and resource allocation thus makes it a crucial participant in India’s progress towards being a sustainable economy.

The RBI’s recent encouragement of commercial banks towards green-financing is a paradoxical illustration of the transformation of Indian banking in the last two decades. Deposit-driven commercial banking, which depends on people’s private savings, has gradually been pushed to bankroll capital and risk-intensive development projects by corporations.

Noting this transformation, economist Jayati Ghosh had wrote almost a decade ago that

“… conventionally, commercial banks, which mobilise resources from the public through relatively small deposits that promise safety and liquidity, do not lend money to projects involving lumpy, illiquid investments with long gestation lags and relatively high risks. But the public commercial banks in India have been pushed over the past decade to provide more and more resources for such projects.”

Thus, Indian banks and non-banking finance institutions, such as the Life Insurance Corporation (LIC) of India, have been funding high adverse-impact projects. The Global Coal Exit List revealed last year that financial institutions from India were the third-largest investors out of six countries financing 80% of the world’s coal investments, with shares and stakes in coal-based projects amounting to $55 billion.

Apart from LIC, the investors included other public sector enterprises like the State Bank of India as well as private banks and investment firms.

Oilchange International, in its 2021 report on ‘How Central Banks Are Funding Climate Crisis’, found that ICICI, the State Bank of India, Axis Bank, Trust Group and HDFC constituted the fourth-biggest financiers of coal-based projects worldwide.

Indian commercial banks’ large-scale investment in Big Infra has exposed the Indian people’s savings and personal investments to financial risk as well as has made almost every common person with a savings account party to projects that worsen the climate crisis, displace people and destroy livelihoods.

Ultimately, the RBI discussion paper dwells on the eventual question of risk. But its manner of discussion and framing is symptomatic of how the financial sector has responded to the climate crisis and its social consequences. The paper continues to strengthen the deleterious view of climate-related issues solely in terms of investment risk.

It is important for the financial sector to look at possible protests against, say, a mining project or costs involved in shifting from fossil fuels to renewable energy – but in terms of financial risk, the scale of the climate emergency and its aftermath ought to make the compelling case that impact risk be prioritised over liability risk.

One example of such prioritisation already exists in banks’ ‘exclusion lists’, where they commit to not fund lucrative sectors that have recognisably grave consequences for society and the environment, such as arms-manufacturing and the tobacco industry.

In addition to discussing risks, the RBI survey and paper also suggest that “public and private sector banks may consider aligning their climate-related financial disclosures with a widely accepted international framework”. The central bank also proposes that commercial banks commit to targets regarding green-lending, mainly by investing in renewables and towards reducing carbon emissions.

The ESG is a metric-based reporting paradigm that quantifies impact and investments and encourages disclosure; helps regulators and banks earmark a portion of their lending to green finance; and build evaluation frameworks and offer incentives. So a question naturally arises: should banks consider setting minimum mandatory criteria vis-à-vis disclosure, investment, and thresholds for social and environmental criteria for investments?

At present, the ESG commitments of most banks are not mandatorily implemented – nor is the criteria for each indicator well-defined. In recent times, some communities and quarters of civil society have been pushing banks to move beyond ESG, towards a ‘safeguard regime’ that comprises mandatory assessment mechanisms, criteria and thresholds for project clearance and evaluation; clauses related to prior informed consent from potentially affected communities; and a robust grievance-redress mechanism.

The SFG, and the RBI itself, have so far seen themselves in an advisory role when it comes to climate finance, supposedly prioritising the ‘development’ needs of the nation. But this ‘development’ model, which has become synonymous with Big Infra resulting in super-high profits for a select few, does not entail an inclusive distribution of opportunities and benefits for everyone. At the same time, it ensures that the consequences of the climate crisis and environmental degradation are borne by the millions who do not possess adequate resources to secure relief from these consequences.

So as custodians of public money, isn’t it time our banks prioritised the people and the country’s ecological well-being in this time of an unprecedented crisis?

The original article published in Science The Wire can be accessed here.