NUSA DUA, Indonesia — Civil society groups have welcomed a move by the International Finance Corporation to transition the financial institutions it invests in away from supporting coal projects — but some say it is too little too late.

In an op-ed for Devex on Monday, the head of the World Bank’s private sector arm announced a “bold” new policy ahead of the World Bank Annual Meetings in Indonesia this week, which would see it working with commercial banks, investment funds, and other financial institutions to shed coal from their investment portfolios. While IFC does not directly finance coal-related activities, some of the institutions it invests in do.

The announcement came on the heels of a stark new report from the Intergovernmental Panel on Climate Change, which has lent new urgency to calls for a comprehensive energy transition.

Civil society groups have been campaigning for years for IFC to be more transparent about where its money goes, and to take more responsibility for the investment activities of its beneficiaries. The institution has taken steps in recent years to reduce its coal exposure — such as “ring-fencing” most of its investments in financial intermediaries into other development sectors — but the new approach will go further by specifically targeting financial intermediaries that have coal projects on their books but are willing to take steps to divest from the sector.

“I want to proactively seek financial intermediaries that would like our help in greening their portfolios and reducing their exposure to coal projects, which are not only bad for the environment but could also become stranded assets in the future,” IFC chief Philippe Le Houérou wrote in the op-ed.

While details of the new policy are still being worked out, IFC’s representatives told civil society groups to expect more changes in the institution’s work with financial intermediaries soon. In the future, the institution will take a more “risk-based approach,” streamlining its processes for low-risk investments in order to dedicate more due diligence to higher-risk financing, Mary Porter Peschka, IFC’s director of advisory services, said Tuesday.

Civil society groups have welcomed the new policy, which Kate Geary, co-director of Bank Information Center Europe, described as “sending a strong signal that there is no future for coal.”
However, they also said the new approach does not go far enough since it will only apply to new investments and not to the pipeline of projects IFC is already supporting through intermediaries. Two commercial banks in the Philippines, for example, received financing from IFC and went on to provide billions of dollars in financial support for the coal sector, according to a report released by BIC earlier this year.

“It’s great to talk about new clients … but we have to talk about the existing portfolio … IFC’s hands are still dirty,” Geary said during a civil society session at the annual meetings on Tuesday.

“The number of coal projects that IFC has supported in the past — the communities are still suffering, and the harm that [has] occurred is still there. IFC has to take some action to address those harms, and also to stop some of the coal plants that haven’t happened yet,” Geary added.

Speaking about a coal-based thermal power plant in India part-funded by IFC through an intermediary, Joe Athialy, director of the Centre for Financial Accountability India, said:

“The IFC’s change of heart on coal has come too late for the communities affected by the GMR Kamalanga coal plant, who continue to suffer to this day. As part of its reforms, the IFC should put right past damages and ensure [financial intermediary] clients provide redress to affected communities.”

Civil society groups have also called on IFC to extend the policy to all fossil fuel-related activities and not just coal, which would bring it in line with broader World Bank Group policy. In 2013, the World Bank vowed to stop direct financing for coal projects except in “rare circumstances,” such as where a country has no “feasible alternatives to coal.” In late 2017, World Bank President Jim Kim further committed that the institution would no longer finance upstream fossil fuel projects after 2019.

“This is an important step by the IFC … [but it] must now also ensure that it extends this new approach to be consistent with the World Bank Group’s broader commitment to end finance for oil and gas extraction, and lead a transition of all investments toward a safe climate future,” said Alex Doukas of the Big Shift Global campaign in a press release.

Campaigners also called on IFC to improve transparency in the way it lends through financial intermediaries so that communities negatively affected by IFC-backed projects can hold the institution accountable through the Compliance Advisor Ombudsman. The current financial intermediary lending process is “inherently flawed, un-transparent, and unaccountable,” according to Athialy.

Campaign groups called on IFC and the financial intermediaries it supports to disclose more information about the subprojects they support, and carry out greater consultation with communities to help ensure harmful projects do not get financed in the first place. They also want IFC to track and disclose its financial intermediary clients’ exposure to coal and other fossil fuels so it can be more easily monitored by civil society organizations. And they want to see IFC compensate communities who have already suffered due to existing or past coal projects supported by IFC financial intermediary clients.

In an interview with Devex on Wednesday, Le Houérou said the policy still needs to be “fleshed out.” While the plan is to start with coal, the strategy could later expand to include other fossil fuels, he said.

“We have to be pragmatic and start with the worst offender which is coal … and let’s take it from there,” he said, adding that IFC has limited leverage and influence over other actors. “If you want to be a leader you have to be ahead of the game, but not so far that nobody follows you.”

The article, first published on Devex, can be accessed here. 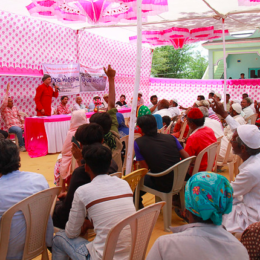