Snippets from the world of International Finance 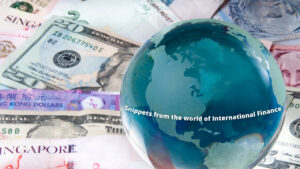 We are posting these snippets at a time when the mega yearly rituals of the World Bank and IMF a.k.a the Annual General Meetings, have ended and the balance of payment crisis in Sri Lanka has flared up. A lot more has happened in the last two months that requires pondering and evaluation. We are posting these snippets after a month-long hiatus, attempting to present commentaries for the month of March and April 2022.

What happened at the IMF and the World Bank Annual General Meetings?

The Annual General Meetings of the International Monetary Fund and the World Bank this year were an opportunity for the Bretton Woods Institutions to address a number of impending issues with the world economic order.  Despite sounding the alarm, neither the World Bank nor the IMF or the G20 offered much-needed ambitious solutions at the Spring Meetings.

The IMF unveiled its Managing Director’s “Global Policy Agenda 2022” while the World Bank presented a roadmap for the next 15 months. As expected, there are no bold and ambitious debt solutions from these leading international financial institutions that claim commitments to alleviate poverty and support developing countries on the way to recovery. The World Bank announced $170 billion in crisis response financing to be rolled out in 15 months, targeting to commit $50 million within the next three months. Much of this is expected to be loans just like the $200-billion COVID-19 crisis response from 2020-2022, of which only $23 billion of the $73 billion that went to the International Development Association (IDA) were in the form of grants. Many countries in the Global South, already deep in record-breaking levels of public debt, will continue to be locked in debt service at a time when public funds are urgently needed for public goods and services.

Amidst the looming crisis in Sri Lanka and another round of loans for Pakistan, the Fund conveniently evaded the responsibility for the massive accumulation of debt and is furthering false solutions like the Debt Service  Suspension Initiative (DSSI) through a Common Framework. It was also pointed out by several civil society organizations at the Civil Society Policy Forum that the IMF’s Resilience and Sustainability Trust (RST) is no silver bullet for channelling much needed special drawing rights (SDRs). In real terms, from the $650 billion SDR allocation that the IMF made available in 2021, only US$275 billion was received by developing countries, of which $21 billion went to low-income countries.  The Bank too had no innovative solution at hand. To note, its private lending arm, International Finance Corporation (IFC), went scot free when the U.S. Supreme Court denied the appeal to hold IFC accountable for the damage caused to the livelihoods of a fishing community from the coast of Mundra, Gujarat whose livelihoods have been destroyed by the Tata Mundra Ultra Mega Power Project (UMPP), a coal-fired power plant funded by the IFC. This decision came only a few days after the Spring Meetings ended.

All in all, the meetings ended with the same failed responses. In meetings where a business-as-usual approach reins supreme, this open letter proves to be a great reminder of the people’s demands.

At the ADB and AIIB:

In a move to make its infrastructure financing more affordable to its less developed members, the Asian Infrastructure and Investment Bank has come up with a new facility called Special Fund Window (SFW) to reduce the cost of loans. As a blended financing facility, SFW is deemed to provide interest rate buydowns to eligible sovereign-backed projects that are aligned with AIIB’s Corporate Strategy priorities and targets. This facility is supposed to be funded by voluntary contributions from AIIB’s members. As per the memorandum, the decision-making authority regarding project approval will reside within AIIB’s existing governance structure and the SFW implementation strategy will be fully incorporated into AIIB’s regular investment process.

In its first partnership with HSBC India, targeting 400,000 micro-borrowers, the Asian Development Bank has signed an agreement to establish a $100 million partial guarantee program. The arrangement is supposed to help microfinance institutions access funding for on-lending activities as they expand operations after the coronavirus pandemic. It was in 2010 that the ADB first got into micro-financing and since then has provided more than $1.8 billion in loans and helped mobilize $881 million in co-financing. ADB has also entered into another partnership with Axis Bank Limited (Axis Bank) to support sustainable supply chains in India. The idea is to make loans for small and medium enterprises (SMEs) accessible so that they can take part in trade through environmentally and socially sustainable supply chains.

At the level of projects, the Asian Development Bank approved two sovereign infrastructure projects in North-Eastern India in the month of March. One is the Nagaland Urban Infrastructure Development Project and the other is the Infrastructure Development of Industrial Estates in Tripura. Both of these projects are sovereign projects where the ordinary capital resources allocated are US$ 2 million.  Apart from this, another loan was approved for a non-sovereign project called the AJ Solar Power Project in the month of April. The borrower, AEW India West One Private Limited, has proposed to construct an 80-megawatt solar photovoltaic-based power plant in the state of Gujarat in India.

ADB’s Independent Evaluation Department (IED) has released a new report on additionalities associated with ADB’s non-sovereign operations for the period of 2008-2020. The evaluation was conducted to assess “the effectiveness of ADB’s non-sovereign operations in delivering additionality in its projects and the extent to which these contributed to development outcomes.” Amongst other things, the report notes that weak monitoring and evaluation mechanisms of the private sector clients can hamper the tracking and reporting of additionalities and how the concept of additionality is not consistently understood within ADB operations. The manner in which ADB defines additionality is compiled in the below noteworthy tabulation from the report. 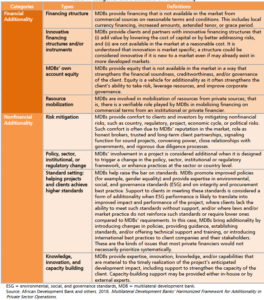 At the 7th Our Ocean Conference, the ADB launched the world’s first Blue Bond Incubator with the help of its Asia-Pacific Climate Finance Fund (ACliFF). The launch of this project ushers in a new era of international financial investment, scaling up sovereign and corporate blue bond issuances for critical ocean investment. It will be interesting to see whether these plans and economic growth strategies demanding constant industrial expansion in climate-vulnerable coastal areas will be able to comprehend the real threats of climate change disasters. Blue bonds, by definition, raise debt to fund ocean projects. Work under the incubator is supposed to develop a standardized global guidance for the issuance of blue bonds which will be developed in collaboration with the International Capital Markets Association, the International Finance Corporation, the United Nations Environment Programme Finance Initiative, and the United Nations Global Compact. As per the ADB press release, the “blue bond proceeds will finance projects that enhance ocean health through ecosystem restoration, natural resources management, sustainable fisheries and aquaculture, reduction of coastal pollution, circular economy, marine renewable energy, and green ports and shipping. At the same time, these investments will support sustainable economic growth and jobs for the future.”

In the trade arena

There are quite a lot of developments happening at the level of WTO and negotiations leading to the 12th Ministerial Conference (MC12). The countries are finalizing their positions on the deliverables for the same. In a communication forwarded to WTO members on 25 April, WTO Director-General Ngozi Okonjo-Iweala, Chair of the 12th Ministerial Conference Mr Timur Suleimenov of Kazakhstan and General Council Chair Ambassador Didier Chambovey of Switzerland informed delegations that the WTO’s 12th Ministerial Conference (MC12) will take place on 12-15 June 2022 at WTO headquarters in Geneva. The format of the meetings is still shrouded in confusion. A stocktaking exercise is planned later in May to make clear whether the World Trade Organization’s 12th ministerial conference (MC12) scheduled for 12-15 June will be a negotiating meeting or a non-negotiating session.

In the past few months, the WTO Secretariat has been facilitating discussions among the European Union, the United States, India and South Africa on the TRIPS Waiver issue. However, there is no agreement among these so-called “Quad” members on the proposed outcome that is widely known to be drafted by the WTO Secretariat. However, the content of the document has leaked and that expected document is expected to be no different from the leaked text. Several questions have been raised regarding the status of the text as it is being touted as an ‘agreement’, however, the US Trade Representative appearing before the US House Ways and Means Committee on 30 March, told members that they are aware of the leaked text on a waiver of intellectual property but stressed that “no agreement on text has been reached.” It can be noted that the proposed outcomes are based on the EU’s declared positions over the past year.

In another publication prepared on subsidies, trade and international cooperation by the “Gang of Four” (i.e. that IMF, World Bank, OECD and WTO), they have jointly declared their goal to discipline and design subsidies to curb growing distortions and market failures. They espouse that “the growing use of distortive subsidies alters trade and investment flows, detracts from the value of tariff bindings and other market access commitments, and undercuts public support for open trade. Sharp differences over subsidies are contributing to global trade tensions that are harming growth and living standards.” In an online discussion between Kristalina Georgieva, the Managing Director of the IMF; David Malpass, the President of the World Bank; Ngozi Okonjo-Iweala, the Director-General of the World Trade Organization; and Mathias Cormann, the Secretary-General of the OECD, all agreed on some positions that were built on a rather problematic structure, a structure that civil society organizations in the global south and progressive forums have touted questionable.

That’s all for now, we will be back again next month.

Note: These snippets are an attempt at providing a monthly roundup of the happenings in the International Finance arena. Do you have suggestions for us to make this better? We would love to hear from you. Please send them to us using this form.