In the context of the upcoming general election, a two days consultation was organized by Mahegi Bijali Abhiyan – Madhya Pradesh and National Alliance of People’s Movement – Madhya Pradesh on “Energy and Infrastructure Development – a Democratic Process” in Jabalpur on 4th -5th April 2019. More than 55 people from 30 people’s organisations and grassroots groups from across Madhya Pradesh which are resisting mega energy and infrastructure construction projects in their respective areas participated in the consultation. The two-day consultation process ended with the community leaders from these groups came out with specific demands related to energy and water sector development projects and their financing mechanisms. A state-level coordination committee was formed which has been formally named as – Madhya Pradesh Jan-Sangharsh Samanvay Samiti, it is an umbrella forum which looks to represent grassroots groups and people’s organisations questioning, critiquing and resisting mega infrastructure projects in energy and water sector in Madhya Pradesh.

The state level co-ordination committee resolved and prepared demands of these groups which will be put forth to all the people’s representatives as part of the democratic process. The groups also agreed to present these demands and get it passed through Gram Sabhas resolutions in the state on 14th April 2019 when the next gram sabha would convene. Thereafter, all the 30 groups will ask all the people’s representatives during the general election to accept and formally agree to them, so as to ensure support and encouragement of the local community members. The committee will also meet the Chief Minister of Madhya Pradesh and the concerned ministers to discuss the resolution in the near future. The committee will also hold briefings and meetings in Bhopal and other regions of the state in this regard.

Resolution and demands presented to the people’s representatives – 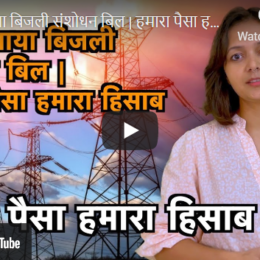