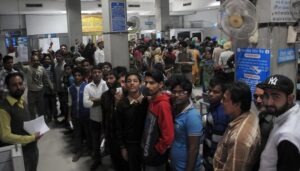 On November 9, 2016, when journalists approached me as the senior vice president of the All India Bank Officers’ Confederation for a comment regarding the demonetisation announcement by Prime Minister Narendra Modi the previous night, I said we would face the challenge and co-operate with the government to ensure the smooth exchange of currency notes. As a responsible person in this field, that is what was expected of me.

But on November 10, when bank branches opened to allow denotified currency notes to be exchanged for new ones, we were faced with utter chaos. Around the country, there were huge, unmanageable panic-stricken crowds and a dire shortage of currency. The raft of confusing guidelines only made matters worse and paralysed banks.

Upon enquiry, I found that banks had in fact received the new Rs 2,000 notes from the Reserve Bank of India before November 8 but of course no one knew that the drastic step of demonetisation was on the cards. We had been instructed not to open the boxes until the Reserve Bank notified us. This was a bad idea because banks cannot keep currency in their chests without verification.

The Reserve Bank and the ministry of economic affairs (of which the present Reserve Bank Governor Shaktikanta Das was the secretary) were issuing instructions almost on a daily basis without any clarity, further perpetuating the confusion.

One of the instructions, for instance, was to procure indelible ink used during elections and apply it on customers’ fingers to ensure that they did not attempt multiple cash exchanges. But we were not told where we could obtain this ink at short notice. These confusing instructions only added to the anguish of customers. It was bank employees who were often were at the receiving end of their anger. At a time when we needed clarity, the Finance Ministry was often silent.

While even the Opposition leaders were hesitant to take a position, I issued press statements criticising demonetisation. These were based on my own reading of the previous instances of demonetisation and the untenable linking of the move with the attempt to eradicate black money.

I appeared on many television programmes trying to counter the falsities that were being peddled as the grand objectives of demonetisation and to describe the chaos that was created in the banking sector – particularly for the public sector banks. We were aghast to find that private banks like ICICI Bank were given more new currency notes than even the public sector State Bank of India.

Our bank staff were standing at Reserve Bank currency chests for hours just to get few lakh rupees of new currency notes. We even held a demonstration in front of the Reserve Bank of India office in Chennai.

Many reports of hoarders having fresh Rs 2,000 notes came to light in Delhi, Jaipur, Bangalore and other places. They included businessman Sekar Reddy and Tamil Nadu Chief Secretary P Rama Mohana Rao. Former Finance Minister P Chidambaram alleged that new notes may have gone from the Reserve Bank of India printing press to some individuals without going to the currency chests of banks.

I repeatedly demanded that the Reserve Bank should release the details of currency being issued every day to each bank and provide the details of serial numbers to the investigating agencies. But to no avail. If it had been done, within no time investigating agencies would have found out from which bank these new Rs 2,000 currency notes were being disbursed and through whom.

This is one of the reasons why, even after five years, no details are available with the government or the public about how this happened. There were 155 well-documented cases reported in the press of huge amounts of new currency being seized from individuals. Not a single case was prosecuted. Sekar Reddy is back in action on the board of Thirupathi temple and Rao retired after being reinstated.

There must be an enquiry that investigates the Reserve Bank note printing presses in Nashik, Dewas and Salboni in Mysore.

Similarly, accountability needs to be fixed for the calamity that ensued. Just 11 days after demonetisation, I addressed a public meeting at the Constitution Club in New Delhi chaired by Usha Ramanathan at which I demanded the resignation of Reserve Bank Governor Urjit Patel. I reiterated this demand on the first anniversary of demonetisation.

It was not until December 10, 2018 that Patel resigned, though under different circumstances. It is widely reported that his decision was the result of mounting conflicts with the government.

What it showed was the utter disregard of the Reserve Bank of India by the government and a corrosion of its apex and autonomous position. These are concerns that should have alarmed all democratic minded people.

​What were the costs? Of course, most tragic is the human cost of decision. There were serpentine queues in front of every branch, as customers waited for hours to deposit their old, invalid notes and withdraw new ones. Daily-wage earners had to forego work to stand in line, throwing their already precarious lives into sheer despair. Fifteen lakh people lost their jobs during this period, as per the Centre for Monitoring Indian Economy. Micro enterprises shut down under the cash crunch. Dealing with the cumulative shocks of demonetisation, the introduction of the Goods and Services Tax shortly after and the harsh Covid-19 lockdown in 2020, they are far from recovery.

The cost to the banking sector alone was huge. Banks spent Rs 13,000 crores as the direct cost of demonetisation. Besides, they had to suspend their lending activities for several months to cater to the chaos of demonetisation, incurring further losses.

The government, which claims that it was capitalising banks, did not care to compensate them for the losses and expenditure they incurred due to demonetisation. The costs were myriad: ATMs had to be recalibrated, overtime had to be paid to employees, for months notes had to be stored and remitted to the Reserve Bank and arrangements had to be made to manage the crowds.

Bankers were working 14-18 hours. Some officials were not given leave. Customers were at the edge of their patience and temper. I myself was gheraoed by customers at a branch when I had gone for a visit when there was a shortage of currency.

Decisions were made by the government without our knowledge or even time to prepare but that we were left helpless to deal with. Some employees practically lived out of their branches for days.

Recall Prime Minister Narendra Modi’s speech on November 13, 2016.“I have asked the country for just 50 days,” he said. “If after December, 30, there are shortcomings in my work or there are mistakes or a bad intention found in my work, I will be prepared for the punishment that the country decides for me.”

Even though the government claimed that the move would put an end to counterfeit currency, fake currency seized in 2016 amounted to Rs 15.92 crore. Every year since then, the Reserve Bank has reported an average of 150% in fake currency seizures. The other target of demonetisation was terrorism. But far from being erased, as per the government’s own admission, the phenomenon is in fact increasing.

The government’s later claim that cash would be replaced by digital transactions has also been belied. In 2016, currency in circulation was Rs 16.4 lakh crore. In 2020, that figure went up to Rs 24.2 lakh crore. As on October 15, currency in circulation is Rs 29 lakh crores. The very correlation of cash with black money was unfounded. There was also a dubious claim that Income Tax returns have gone up since demonetisation. While selective usage of data may give such an impression, the tax-to-GDP ratio belies these claims.

After five years, it’s worth asking what exactly India did achieve after all this. For what did Indians endure such pain and agony?

While the rich thrived, it is the poor who bore the burden. The GDP took a dip. Five years later, the economy is still reeling under the shock. Covid-19 has certainly worsened matters. But let us not forget that it all started with demonetisation.

Will the prime minister take moral responsibility for this?

The original article published by Scroll.in can be accessed here.