Changing goal posts has been a hallmark of the precariously conceived and insensitively implemented demonetisation, second anniversary of which was yesterday (Nov 8).

The three objectives mentioned while declaring demonetisation – unearth black money, stop terror funding and eliminate counterfeit currency were never met. On the contrary 99.3% of the currency in circulation at the time of demonetisation returned to banks.

Reports are coming out now about the RBI Board meeting which was hurriedly called for less than four hours before declaring the demonetisation on November 8, 2016, to gave its approval to the scheme, rejected, in writing, two of the key justifications — black money and counterfeit notes — that the Prime Minister would make in his televised address to the nation. Indian Express reports (Nov 9, 2018) the minutes of the Board said that “Most of the black money is held not in the form of cash but in the form of real sector assets such as gold or real-estate and… this move would not have a material impact on those assets.”

While attempts to get the exact number of people died due to demonetisation through RTI is being stalled by the PMO (The Wire, Nov 8, 2016), there are news reports that over 100 people died because of it. The human costs and the inconvenience caused to people have been too high to justify the 3% of the total amount demonetised which did not return to the banks, which is presumed to be black money.

The unorganised sector, which employs 86% of the workforce in India and contributes 51% of the GDP, was the worst affected. As economist Arun Kumar said “Surveys done by the Punjab Haryana Delhi Chamber of Commerce and Industry, All India Manufactures Association, State Bank of India, EPW, NGOs and so on showed that the impact was between 50% and 80% on the small and unorganised sectors. RBI, in its report in March 2017, said that industry slowed down. There is also evidence that people in the micro and unorganised sectors went back to the villages as businesses closed. (Economic Times, Nov 7, 2017). The Centre for Monitoring Indian Economy (CMIE), a think tank that tracks business and economic data, has put a number to the job losses in the aftermath. It says about 1.5 million jobs were lost in the first four months of calendar 2017 (India Today, July 21, 2017).

Yet no one is held accountable for this monumental blunder.

The only sector which flourished was FinTech companies. Mobile banking transactions in August 2018 stood at Rs 2.06 lakh crore, 82 percent higher than the October 2016 figure of Rs 1.13 lakh crore, according to RBI. The digital retail payment infrastructure, which includes card payments, UPI and others increased to 92.6 percent in 2017-18, up from 88.9 percent in the previous year (Money Control, Nov 8, 2018). 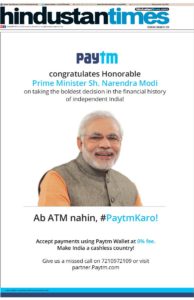 The Paytm advertisement, for which the Prime Minister appeared a day after declaring demonetisation, seems to have worked!

There was no white paper on demonetisation. Nor the Parliamentary Standing Committee could complete its enquiry because BJP MPs stalled the process. The Bharatiya Janata Party, using its majority in the Parliamentary Standing Committee on finance, has derailed a discussion on or adoption of a report that criticised demonetisation as an “ill-conceived” exercise that “led to the lowering of the Gross Domestic Product (GDP) by at least 1 percentage point” (India Today, August 28, 2018). While the report was ready in March 2018, in a 31 member Committee, with BJP’s majority with 17 members, the report was never adopted and the term of the Committee ended on August 31, 2018.

It is pertinent that shroud of secrecy around demonetisation is unveiled and details of decision-making pertaining to demonetisation are made public. Its impacts on people and economy needs to be enquired by credible bodies and made available for public scrutiny. Responsible people found in the enquiry should be held accountable.

You may be interested to have a look at the Booklet: Looking Back at One Year of Demonetisation