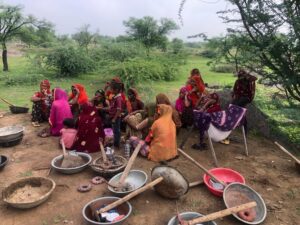 Mahatma Gandhi National Rural Employment Guarantee Act 2005 was started in 2005 by the United Progressive Alliance- a coalition Govt led by the Congress Party in which the Left played an important role. Under this scheme, 15.31 Cr workers are enrolled and Rs.6.52 crore assets have been created to date.  This has generated 131.12 Cr person days of work and benefitted 4.36 Cr households.

The Act is meant, “to provide for the enhancement of livelihood security of the households in rural areas of the country by providing at least 100 days of guaranteed wage employment in every financial year to every household whose adult members volunteer to do unskilled manual work and for matters connected therewith or incidental hitherto.” The Act also says the disbursement of daily wages shall be made on a weekly basis or in any case not later than a fortnight after the date on which such work was done. The Act also provides for an unemployment allowance.

The State Govt meets the cost of unemployment allowance, one fourth of the material cost of the scheme and administrative expenses of the State council. The rest is funded by the Union Govt. Gram Panchayats prepare proposals for improving the infrastructure of their panchayat and submit them to the Govt for approval.

The focus of the scheme is on the following works in the order of priority.
i) Water conservation and water harvesting
ii) Drought proofing (including afforestation and tree plantation)
iii) Irrigation canals, including micro and minor irrigation works
iv) Provision of irrigation facility to land owned by SC, ST beneficiaries of land reforms and beneficiaries under the Indira Awaas Yojana.
v) Renovation of traditional water bodies, including desalting of tanks.
vi) Land development
vii) Flood control and protection works, including drainage in waterlogged areas.
viii) Rural connectivity to provide all weather access
ix) Any other work which may be notified by the Central Govt in consultation with the State Govt.

This provides ample scope for improvement of the rural economy. Water harvesting, irrigation and drought proofing improves the productivity of the land and enhances the income of the farmers. All weather roads improve connectivity and transportation of produces.

The Union Minister for Road Transport is saying by 2024 we will have roads like the United States. Maybe that will help the urban rich, but what is badly needed is rural all-weather roads in villages, which are still not available in many villages.  Similarly, water for irrigation is not available in many parts of the country, and we see massive barren lands.  Water harvesting and irrigation can transform the 644 districts of the country where the scheme is in operation. But unfortunately, the implementation has not been very good and social audits mandated by the Act have also become meaningless in many parts of the country. 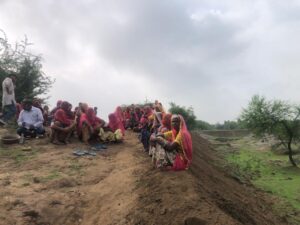 A workers’ Union to the rescue

A unique model for the optimum utility of the scheme, preparation of relevant schemes, ensure 100 days employment and involve the people in the rural development process has been successfully implemented in rural Rajasthan by an organisation called Mazdoor Kisan Shakti Sangathan (MKSS). It was started in 1991 by Dr. Aruna Roy from Tamil Nadu who had resigned from the Indian Administrative Service just after 7 years of service and Mr. Nikhil Dey, an educated youth whose father was Air Marshal P.K. Dey along with Mr. Sankar who is from a village near Bhim in Rajasamand district of Rajasthan.

While the evolution of MKSS is a bigger story which is very important for anyone working at grass root level on development, their offshoot, MKSS Union for MGNREGA workers is a unique model which can be replicated with a group of committed team and transform the rural economy of the 644 rural districts.

The Union has organised the NREGA workers as members, with a membership fee of one day wage per annum. They have groups of 30 workers each (almost all of them women), and they ensure that they get 100 days of employment, which does not happen in many places. They also ensure that the minimum wage fixed (Rs.231 against State Minimum wage of Rs.259) is paid without any pilferage. Likewise, the union makes sure that projects are prepared and approved which can transform the rural economy and livelihood of the people, help in using the MMS App on their mobiles to upload attendance, and that the projects are implemented, and social audit takes place.

This is done with the help of full-time employees of the Union, who are paid minimum wages by the Union.  The Union has also empowered the women through the monthly meetings through which they come to know of other schemes of the Govt, access them and improve their livelihood further.  Children are encouraged to go to school and for higher studies.

I visited one of their ongoing projects recently. The project is about building bunds and creating a water body.  Half of the work is completed and done well.  With good rain and planting of trees in the bunds, the area will become cultivable and over a period migration may stop.  The union also allocates areas of work to be completed and if one completes work early they can leave early.  The women bring young children with them and work.  The group helps one another.  Though there is an option to come to work early in the morning and complete the work quickly and leave, women prefer to come at 9 am after finishing morning chores and after sending children to schools.

Men in the conservative society are not opposed to the women going to work as the income is important for them and the work is within the village, and sometimes the money goes for their drinks too.

The success of this work has removed corruption, while it has angered the Panchayat presidents.  In Jaipur on 6th August 2022, they came in luxury vehicles for a massive rally demanding that there should not be any social audit! This has to be condemned, and we need to see whether any action can be taken against them for violation of their oath.

They can’t kill it!

The present Union Govt has been trying to close this scheme but could not do it due to resistance.  But they keep reducing the allocation instead of increasing it.  There is a need to increase the number of days of work and the wages.  There is a need to expand it or have an urban employment programme because town Panchayats, Municipalities, and Corporations are not part of this.
The Trade Unions should learn from this experience and mobilise the 15 crore unorganised workers and get them the benefits of provident fund, gratuity and pension. The scheme can be enlarged to more activities like maintenance of public services, child care, health care etc which will create more employment and improve the economy as a whole.

To the Prime Minister who thinks these are freebies to be abolished, I would like to say that in 1817 itself Great Britain had a ‘Poor Employment Act’ and the US had the ‘New Deal’ in 1930 during the great depression for the benefit of the farmers, unemployed youth and the elderly.

Our economy is moving in that direction, and these are not freebies.  These are schemes implemented with the GST, which even the poorest are paying. Opportunities are plenty.  It only requires a will.  We need a Govt which has the will to improve the life of people who are the most vulnerable and also transform the rural economy. 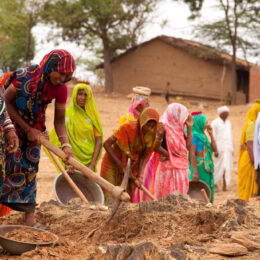 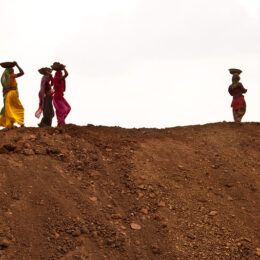 Why caste-based MGNREGS payment is sending shock waves across India 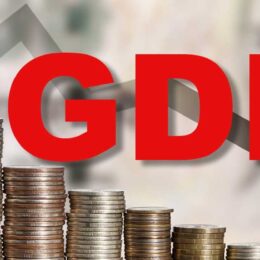 Indian Economy in Shambles-What is to be done?