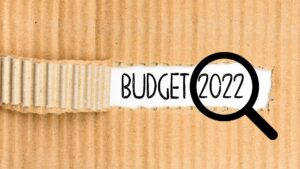 While claiming that India is number one in vaccination, the Economic Survey presents a chart of a few countries, leaving out China. ​To show our spending in the social sector is worthwhile, it provides data of combined spending of the Union and State Governments  and omits showing the Union Govt’s expenditure. Using the inflation rate of 5.8% last month, it claims 3% inflation and makes projections based on that figure. Although crude oil prices per barrel were already $90, the survey projected a $75 price for crude oil at the time. The global projections are that it will soon reach $100. The survey, however, calculated the rate at $75. This is used for revised estimates of expenditure in the budget as well.

​Isn’t this concealing the truth and uttering lies?

​The FM said, “We are marking Azadi Ka Amrit Mahotsav and have entered into Amrit Kaal, the 25-year-long leap up into India @100.” In Vedic astrology, ‘Amrit Kaal’ is a critical time slot during which the gates of greater pleasure are opened to inhumans, angels, and human beings. It is considered to be the best and most auspicious time to start any upcoming task. ​PM Modi announced this on 15th August 2021, it’s good to ask what is the most auspicious time? 15th August or 1st March? ​When 84% of the population has lost its income, when unemployment is at peak, when more than 1.5 crore people have lost their jobs, how could this be the most auspicious time?

​The FM talks about 25 years. If we see the average lifespan of Indians, neither she nor the PM will be there after 25 years. Why make false promises? It appears that the inhumans – the corporate are going to have a better time than the angels and humans. ​FM talked about relying on a virtuous cycle starting with private investment with public capital investment helping to crowd in private investment. Arun Jaitley, Piyush Goyal and Nirmala Sitaraman have been begging the rich for investments, but the record for investments has been dismal in the last few years.

​A paper by RBI says the number of completed private projects declined substantially during 2020-2021. The data also says only 8 private corporate projects were completed in 2020. So anticipating crowds for private sector projects is only a daydream. ​Instead of using reliable data from a national sample survey, UE statistics of reliable institutes, they have invented ‘High Frequency Indicators’ many of which are not verifiable and irrelevant.

​CMIE says there are 5.3 crore unemployed people as of December 2021 and 1.5 crore lost jobs during the pandemic. ​The Labour Bureau has stopped releasing labour statistics after 2017. The Consumption Expenditure Survey Report of the Labour Bureau is not available after 2009-10!

In 2014, it was announced there would be no income tax for the first 5 lakhs, and that 15 lakhs would be credited to everyone’s account. The video of Mr. Modi’s speech made on November 7, 2013, in Chhattisgarh is still available. Even in 2018 Mr. Ramdas Athawale, Minister for Social Justice and Empowerment said that the promise of Rs.15 lakh in every account will be kept but will take time due to technical issues.

​Another promise of 2 crore employment figure is also forgotten. Why doesn’t the Economic Survey or Budget provide  year-wise data on the employment generated sector-wise, along with information like from where the 60 lakh employment announced in the Budget will come and how?

​What happened to some of the following important promises made in 2014?

What happened to the election promises of 2019? Just a few to remind Modiji & Nirmala ji.

So many things were promised by 2022. Are we going to wait for Amrit Kaal for their completion?

​You can cheat someone many times.

​You can cheat everyone sometimes – But

​You cannot cheat everyone all the time.

Madam Finance Minister, at least listen to the videos of Mr. Parakala Prabhakar.