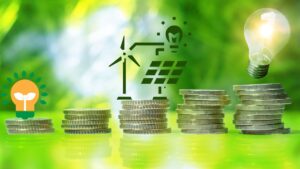 The first half of this year has been challenging for RE expansion both at the global level and in India. Supply disruptions in coal and Liquified Natural Gas (LNG) owing to the Russia-Ukraine war and a surging energy demand saw nations make exceptions to their phase-out plans and global commitments to reduce reliance on coal, and made a scramble for the black rock. Unanticipated global events, surge in post-pandemic resumption of industrial activity and climate change induced temperature rise drove the switch back to coal as consumption soared. RE driven energy plants proved inadequate to meet the energy demand in the Global North. The Global South which still majorly relies on non-renewable sources has had to take two steps back as it gradually puts in place a policy infrastructure for RE. These developments underline; as has been widely noted; that the endeavour to shift to RE is often contingent on geopolitics and other factors. There can be little argument against nations looking for whatever source is available to fulfil their energy needs when faced with scarcity. What is worrying, however, is the fact that instead of thinking of long term solutions, institutions and individuals in powerful positions have used this occasion to question the policies which mandate a shift to RE. What perhaps has not received adequate attention is that, the recent energy shortage crisis underlines the fact that any viable framework to shift to RE must be accompanied by a sustainable finance model. This is especially true for the Global South, as the case of India illustrates.

Questions on ESG in the time of crisis

The recent statement by Chief Economic Advisor V. Anantha Nageswaran urging global investors not to apply for Environment Social and Governance (ESG) criteria ‘indiscriminately’ on developing countries is a case in point. Highlighting the case of developed countries which are showing renewed interest in coal and nuclear energy in wake of recent developments, he dismissed the international concern about India’s excessive reliance on coal. “So when push comes to shove, energy security becomes more important for every nation rather than the so-called green transition. That cannot be different for developing countries.” Coal has been recognised as the biggest emission causing substance which is driving climate change. He argued that global investors should not put ‘indiscriminate’ sustainability conditions on Indian borrowers as energy transition will take time and the development goals of the nation cannot be put in abeyance.

As per Ministry of Coal, coal accounts for 75% of India’s electricity generation. The Global Coal Exit List found late last year that;out of the six countries financing 80% of coal investments; financial institutions from India were the third largest, with shares and stakes in coal based projects amounting to 55 Billion US dollars. The investors from India included public sector enterprises like State Bank of India and Life Insurance Corporation, and private banks and investment firms. In CoP 26 last year the Indian PM announced a net zero emission target by 2070. Indian banks are in the process of stopping funds for any new coal based project. Yet, with the onset of the energy crisis, India has seen an increase of 56% in the import of coal, from June 2021 to June 2022. In May this year the State Bank of India said that even though it had firmed up its ESG policy, it would continue to fund coal based projects. The Union power ministry asked banks in June to provide loans to coal based power generation units.

The CEA’s statement that ESG norms should be sensitive to developing countries’ context, needs to be seen in this light. India faces the tough task of undertaking energy transition to RE without losing out on its energy needs, which are heavily dependent on coal. Asking banks to stop financing coal based projects may have a negative impact on energy production, employment and industrial activity in the short term. But is the solution to this;as the CEA argues; a dilution of ESG norms? Is energy transition at the level of appropriate technology and infrastructure too expensive to be undertaken in the near future? This is where the question of financing transition to RE and adopting suitable technologies becomes crucial. In fact, it is this question that lies at the heart of all viable attempts to shift to RE. A question which the CEA avoids and adopts the easy route of demanding a relaxation of environmental and social accountability.

A possible way out

Considering these constraints, assistant professors Rohit Azad of Jawaharlal Nehru University and Shouvik Chakraborty, Political Economy Research Institute, University of Massachusetts, Amherst, have proposed an ‘Indian Green Deal’ to finance the country’s energy transition.  The fairest option, according to them, is that advanced countries who have historically consumed far more energy than the global south should pay for this transition to developing countries, and propose a global carbon tax based on historical inequities of emission. While this line of argument may benefit India at International fora, the authors realise the difficulties in implementing such a measure in the national and business-interest driven international scene. They propose something similar to be implemented at the level of national economies. Pointing out the class division in emissions within the country they calculate that ‘the richest 10% Indians emit almost seven times as much as the poorest 10%.’ This inequity in emissions, they propose, needs to be inverted while fixing responsibility for financing green transition. Thus, they make a case for a “combination of a wealth tax (including inheritance and short-term capital gains) and a higher corporate tax,” to finance India’s energy transition to RE.

At this critical juncture;the approach should involve thinking of a solution that balances Green Energy requirements with energy security, rather than rushing to dilute ESG measures and global RE commitments.