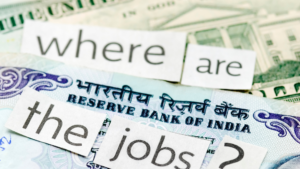 Mr Narendra Modi promised 2 crore jobs per year in 2014 itself. Now after 8 years, unemployment has increased in great proportions due to demonetisation, GST, lockdowns, contractualisation of labour and not filling up vacancies in the public sector enterprises and public services.

Unemployment is a serious economic and social problem. In our country, we do not have a good unemployment allowance. In UP the government provides Rs.1000 for matriculates and Rs.1500 for graduates which is a pittance.

So there is a need to provide more jobs in the government and the public sector where there is a reservation for SC, ST, OBC, weaker sections among forward castes, ex-servicemen and the physically challenged.

In the union government and public sector, the reservation is 15% for Scheduled Castes, 7.5% for Scheduled Tribes and 27% for OBC and 7.5% for weaker sections among the forward caste whose income is below Rs.8 lakhs per annum.

The union government is killing the reservation policy by outsourcing, contracts and non-appointment affecting employment opportunities. We have now one of the highest unemployment rates after independence. Privatisation will further take away reservations in jobs.

Let’s have a glance at employment in the public sector and union government jobs.

As per the 7th pay commission report, there were 52 lakh government employees. This government had brought it to 40.66 lakh as of March 1, 2019, a reduction of 11.34 lakh, out of which only 31.43 lakh vacancies were filled. So the net reduction is 20.57 lakhs. If these vacancies were filled, 308550 Scheduled Caste, 154275 Scheduled Tribes and 555390 OBC people would have been employed in the government sector which provides a good salary, perks and pension. 20.57 lakh families would have improved their status. The children would have got better education and quality of life. The state of UP would have got a major share in these employments. After reducing 20 lakh job vacancies, now Modiji promises 10 lakh jobs and yet some people are cheering.

In Central Public Sector Enterprises, in 2012-13 there were 1733973 employees out of which 286350 were on contract and 43166 were daily labourers. But in 2019-20 there were only 1473810 employees out of which 498807 were contract labourers and 53127 were daily labourers. The number has definitely increased now. The contract workers and daily labourers don’t have any reservations or job security. Their salary is low, and they are given no pension. So, in this way, 260163 vacancies are taken away. As per the 2019-20 Public Enterprises Survey, there were 919648 regular employees out of which 160384 were Scheduled Castes, 99693 Scheduled Tribes and 198581 OBCs. Actually, this number would have doubled without privatisation and outsourcing of regular work to contractors. As explained earlier, a few more lakh people would have secured jobs and social security.

Railways is the largest employer after the central government, and here the reservation policy is fully implemented. As of 31.03.2004, there were 14,41,513 employees in the railways but on 31.3.2020 there were only 12,53,593 employees. Unfortunately, there are 7.5 lakh contract labourers in the railways who are working without any reservation or job security.  With railway privatisation, lakhs of jobs for SC, STs and OBCs are being snatched away.

There were 1,19,767 employees in LIC, now down to 1,08,987 in 2021. LIC also implements the reservation policy in toto. With the aim of privatisation, the employee strength is reduced. LIC also employs 13 lakh agents, who earn a good income. That will also get drastically reduced with privatisation.

Let’s see the classic example of BSNL & MTNL. In 2014 BSNL had 2.38 lakh employees and MTNL had another, 36000. Bent on killing BSNL and MTNL to help Reliance Jio, in 2019, the government sent out 78,569 BSNL employees and 14,387 MTNL employees on VRS after stopping their salary for months. Around 50,000 contract employees have also been sent out, leading to many suicides. When compared with 2014 the employee strength in BSNL has come down by 71% and in MTNL by 84%. In 2019 the government announced that Rs.69,000 Crore will be given for 4G and VRS. Till now, 4G has not been given, both BSNL and MTNL are making losses now, while the reservation policy is gone. Both may disappear sooner or later.

The government has a planned destruction strategy – First misuse the public sector employees, stop funding for research & development, keep vacancies at the top, including the chairman & managing director vacant so that the PSE fails slowly and gets privatised.

And the newly introduced ‘Agnipath’ program is a scheme to exploit the unemployed youth without any permanent job. It may be a dubious way to train RSS with armed training of high quality, as Hitler did for the Nazi youth. It’s dangerous.

Privatisation always reduces jobs. What we need is massive recruitment. The government has to be a model employer. The public sector is also part of the government. Hence, there is a huge scope, hope Modiji is listening.