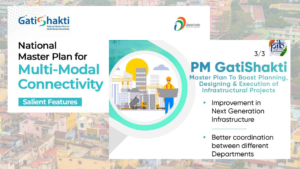 Infrastructure continues to be a primary focus in the Union Budget 2022–23 to boost growth against the backdrop of the economic recovery from the pandemic. The budget extensively focuses on key growth engines of PM Gati Shakti Master Plan for building crucial infrastructure like roads, ports, railways, logistics, etc. In terms of investments, roads and railways have seen a significant increase in outlays. The total outlay for capital expenditure in 2022-23 has also increased sharply by 35.4% from 5.54 lakh crore in 2021-22 to 7.50 lakh crore in 2022-23.

In a departure from the past, the government proposes to fund the entire 2.08 lakh crore capital outlay, up 5% over 2021-22 (BE), for the highway sector through budgetary allocation and asset monetisation proceeds (20,000 crore), without resorting to incremental borrowing at National Highways Authority of India (NHAI) in the next fiscal. As per revised estimate (RE), NHAI is likely to borrow 65,000 crore in 2021-22. The government proposes to build 25,000 km highways next fiscal year at an all-time high pace of over 68 km per day compared with around 37 km/day achieved, the highest so far, in 2020-21. The construction target of 25,000 kilometers of NHs in the next fiscal year will be met under the PM Gati Shakti National Master Plan, under which the Centre will have to provide connectivity to all the economic nodes in India. Union Road Transport and Highways Secretary also said the road construction’s pace will be further increased to achieve the national highways’ expansion target in the next financial year. In the ongoing fiscal, the NHAI and the NHIDCL, so far, have constructed 7,500 kilometres of national highways, and at least 2,500 kilometres of highway construction is expected in the remaining two months

The Road Transport and Highways Ministry had made significant progress under the government’s “PM Gati Shakti National Master Plan”, aimed at improving multi-modal connectivity as well as last mile connectivity across India. As part of the PM Gati Shakti NMP, MoRTH plans to develop a total of 22 Greenfield Expressways, 23 other major infrastructure projects and other highway projects and also 35 Multi-Modal Logistics Parks (MMLPs), as part of the Ministry’s Bharatmala Pariyojana as well as other schemes. Under the Bharatmala Pariyojana Phase I, MoRTH through its implementing agencies NHAI, NHLML and NHIDCL, has kept pace with the work of implementing the 35 MMLP projects identified for development.

According to Union Road Transport & Highways Ministry, the construction of six lane (with paved shoulders) Greenfield corridor from Akkalkot in the state of Maharashtra to KN/TS Border (Badadal to Maradgi S Andola), district Gulbarga/Kalaburagi (part of Surat – Chennai Corridor) in Maharashtra and Karnataka has been sanctioned with a budget of Rs 2355.56 crore. The Union Minister had also inaugurated and laid the foundation stone of as many as 51 National Highway Projects with an investment of Rs 21,559 Crore in Vijaywada, Andhra Pradesh. These 51 National Highway Projects will cover 1380 kilometres.

Two longest railway flyovers in the country are being built at the estimated cost of Rs 1,250 crore in the Katni district of Madhya Pradesh. These flyovers with a total length of 34.9 kilometres are being developed for the smooth movement of trains carrying coal. The two flyovers, one each on the up direction and down direction, are being built on the Bina – Katni – Bilaspur route under the Katni grade separation project. According to the West Central Railway CPRO, the railway project will help in the smooth movement of coal-laden train services from mines in the eastern parts of the states Madhya Pradesh and Chhattisgarh. Coal-laden trains running on the Katni – Singrauli route will have direct access to these upcoming railway flyovers.  These railway flyovers will comprise as many as eight Rail-Over-Rail (ROR) bridges on two existing rail routes, including six other bridges on rivers.

In Union Budget Speech 2022, Finance Minister Nirmala Sitharaman has announced that the implementation of the Ken-Betwa Link Project will be taken up at an estimated cost of Rs 44,605 crore. According to the FM, this is aimed at offering irrigation benefits to 9.08 lakh hectares of farmers’ lands, supply of drinking water for 62 lakh people, 103 MW of Hydro, as well as 27 MW of solar power. The FM’s Budget Speech of 2022-23 further mentioned that allocations of Rs 4,300 crore in RE 2021-22 and Rs 1,400 crore in the financial year 2022-23 have been made for the Ken-Betwa Link Project.

Gujarat has completed nearly 62% of the 337 projects planned under the National Smart Cities Mission (NSCM) so far, spending less than 35% of the Rs 16,500 crore approved for the urban development programme. Out of a total of 100 cities across the country, six were chosen for the NSCM: Ahmedabad, Rajkot, Surat, Vadodara, Gandhinagar, and Dahod. By the end of 2021, 209 of the 337 projects planned for these six cities had been finished. Work orders have been issued for 115 projects, and the tendering procedure for the remaining 13 has begun. Most of the projects aimed at making the six cities smarter are related to information and communications technology (ICT) and water infrastructure.

The Centre has allocated Rs 9,259 crore to Air India Assets Holding Limited (AIAHL), a government-owned special purpose vehicle set up to handle Air India’s debt and non-core assets, for the next financial year starting from April 1, according to a budget document.  In 2021-22, the Centre infused an equity of Rs 62,057 crore in AIAHL in order to clear Air India’s pending dues before its disinvestment. Moreover, Air India was given a grant-in-aid of Rs 1,944 crore and loans of Rs 4,500 crore in 2021-22 to cover “cash losses during Covid period”, the document said.

In the sector of real estate, the Housing and Urban Affairs Ministry has been allocated an amount of Rs 2,600 crore for the construction of non-residential office buildings of the ambitious Central Vista project, including the Parliament as well as the Supreme Court of India in this year’s Budget. The ministry has been given Rs 873.02 crore for residential purposes. Six infra companies, including Tata Projects Limited, Shapoorji Pallonji and Company Limited and Larsen & Toubro Limited, are in the race to win the contract to build the Executive Enclave, which will house the new Prime Minister’s Office, Cabinet Secretariat, India House as well as National Security Council Secretariat.

In this fiscal’s Budget, capital investment of Rs 1, 37,000 crore has been given to the Ministry of Railways. According to the Railway Minister, this will help in completing the railway projects which have been stalled due to lack of investment in the national transporter for a long period of time. In the Union Budget, the Finance Minister announced that during the next three years, as many as 400 new generation semi-high speed Vande Bharat Express Trains with better energy efficiency as well as better passenger riding experience will be developed and manufactured. The testing of the new Vande Bharat version will start from the month of April and the production of this train will start from next August-September.

The state of Odisha has received an allocation of around Rs 9,734 crore which so far, is the highest budgetary provision made and more than the state’s demands for Indian Railways’ infrastructure as well as safety-related projects in this Union budget. The budget allocation of this fiscal for Odisha is Rs 2,738.5 crore more than the allocation of last year (Rs 6,995.58 crore).  Earlier, the Odisha government had demanded an amount of Rs 7,600 crore from the Central Budget for railway infrastructure’s development in the state. Out of the total allocation for the state, Rs 8,415.96 crore has been proposed for East Coast Railway while Rs 1,287 and Rs 31.04 crore allocated for infrastructure projects and safety related work in South Eastern Railway and South East Central Railway respectively.

For the country’s first Bullet Train Project, connecting the cities of Ahmedabad and Mumbai, the state of Gujarat has acquired almost 100 percent of the private land required for the high-speed train project. In January 2018, the first notifications for the land acquisition for this project was issued by the revenue department. As on 31 January 2022, a total of Rs 5,707 crore has been paid as compensation to 6,110 project affected persons (PAPs) in Gujarat, according to National High-Speed Rail Corporation (NHSRCL). According to NHSRCL, the bullet train corridor’s construction in Gujarat was progressing in all the eight districts of the state which includes the construction of pillars for the elevated corridor in the districts of Navsari and Valsad, construction of Surat station as well as Sabarmati terminal hub and development of bridges over Narmada and Mahi rivers. While the land acquisition of 7.9 hectares in the UT of Dadra and Nagar Haveli has also been fully completed, the acquisition of land in the state of Maharashtra has been lagging and 24% of land is yet to be acquired. Of the 336 hectares of private and government land required in Maharashtra, 256 hectares have been acquired as on 31 January 2022. This includes government land of 56.13 hectares.

In a bid to boost Mumbai Railways’ infrastructure, the Union Budget 2022-23 has allocated an amount of Rs 577.5 crore for carrying out various ambitious railway infrastructure projects under the Mumbai Urban Transport Projects (MUTP) in the Mumbai Metropolitan Region. These MUTP projects are being implemented by the Mumbai Railway Vikas Corporation in the Mumbai division. The Union Budget also allocated an investment of Rs 5,000 crore through Extra Budgetary Resources (Partnership) for construction of the Centre’s Bullet train project between the cities of Mumbai and Ahmedabad. Besides, Rs 19,102 crore has been allocated in the budget for National High Speed Rail Corporation Limited (NHSRCL), which is building the first high-speed train project. As a mission to achieve a travel time of 12 hours between Delhi and Mumbai, Rs 450 crore has been allocated in the budget for increasing the speed of the existing New Delhi-Mumbai route (including Vadodara-Ahmedabad) to 160 km per hour/200 km per hour. Also, Rs 185 crore has been allocated for MUTP phase-2, Rs 190 crore allocated for MUTP-3 and Rs 200 crore allocated for MUTP-3A. Besides, an amount of Rs 2.5 crore has been allocated for running 12-coach EMU trains on Mumbai Harbour corridor between CSMT and Panvel/Andheri.

The upcoming station in Surat will become the first station to be ready between Ahmedabad – Mumbai Bullet Train route for India’s first futuristic High Speed Rail project. The Mumbai–Ahmedabad high-speed rail corridor (MAHSR) corridor will cover 12 stations in total- Surat, Vadodara, Anand, Ahmedabad, Sabarmati, Bilimora, Bharuch, Mumbai, Thane, Virar, Boisar, Vapi stations. Once the Mumbai-Ahmedabad Bullet Train Project is ready, the journey time between Mumbai and Ahmedabad will be 2.07 hours (limited stops), 2.58 hours (halting at stations) vis-à-vis existing train journey duration of seven-eight hours. The Mumbai-Ahmedabad Bullet Train will run on Japanese Shinkansen Technology. The Maximum Design Speed- of the train would be 350 km per hour and the Maximum Operating speed would be 320 km per hour. The National High Speed Rail Corporation Limited (NHSRCL) has also recently signed an agreement with Larsen & Toubro Limited (L&T) for design as well as the construction of about 8 Kilometre long viaduct including a High Speed Rail station in the city of Vadodara in the state of Gujarat for the upcoming Mumbai-Ahmedabad High Speed Rail (MAHSR) Corridor C-5 Package.

If there is one aspect of the recently released Union budget that stands out, it is the emphasis on capital expenditures, particularly spending on highways, roads and railways. The budget proposals for this year emphasise a higher capital outlay than the previous year. For the first time capital expenditure accounts for a high 45 per cent of the fiscal deficit. While the expenditure profile details in the budget documents talks of spending into areas such as roads, railways and other areas of infrastructure According to the budget estimate, the capital expenditure outlay for 2022-23 is Rs 7.50 lakh crore. However, a closer look shows that this also includes Rs 1.88 lakh crores for the Ministry of Roads and Highways, Rs 1.37 lakh crores for the Ministry of Railways, and Rs 1.52 lakh crores for the Ministry of Defence as capital outlay. Only three ministries receive a total of Rs 4.77 lakh crore (almost two-thirds of the entire capital outlay).