The World Development Report (WDR) is the World Bank’s development research and policy review report published annually. Started by IBRD since 1978, this report is intended to provide deep and extensive analysis on one particular aspect of economic development, every year. The solutions and policy messages brought out in this report is widely scrutinised by researchers, policy makers, governments and civil society since this ‘flagship’ report is supposedly the Bank’s highly prized research contribution to the development world. Heavy research budgets, far-reaching dissemination and the legitimacy of ‘World Bank’ publication make this a cherished one for the Bank. Few of the previous years’ reports focused on education, health, environment, risk management, poverty, the role of the state, youth, agriculture, equity and public services delivery.

Quick Glimpse into the development of WDR 2019

The World Development Report 2019: Changing Nature of Work (WDR 2019) examines the changing nature of work and firms, laying emphasis on the impact of technology and digital innovation on the current global economy.

But what made this report a highly talked about one in the recent debates on development? The Bank’s previous president Jim Yong Kim writes in his foreword that this document shows the transparency of work since it was open to all for modification of drafts, almost every week online. And then, there were more than a million downloads even before halfway its publication which also made it the most downloaded report in 2018. Another occasion to note is that its preparatory phase was delayed by the Bank’s then chief economist Paul Romer’s resignation[he was the first director of WDR 2019], over his controversial remarks on the direct correlation between the political leanings of the staff and annual rankings of countries in Ease of Doing Business process of the Bank. Subsequently, the work was taken over by Simeon Djankov, who is the Founding Director of the much sought-after, yet much criticised, Doing Business Reports. Yet another highlight of this report was the introduction of Human Capital Index [The human capital project examined in WDR 2019 will be explained in another section of this article], again contested, where countries will be now ranked annually in terms of a child attaining optimum productivity after having attained education and full health from birth till 18 years of age.

But above all, this report faces strong criticism for its two pertinent direct messages – deregulation of businesses and shifting obligations of firms/employers for social protection of workers/employees to the shoulders of the State. Few voices have come out globally carefully analysing the nuances of various explanations given by the Bank to establish the context for its suggestions for the future of work for the evolving economy.

It is true that the report has failed to give a rounded, well-thought critique on the actual challenges faced by workers in the accelerated transformation of the world of work.  To put it short, critically speaking, this report is inherently characterised on anti-worker perspective. The deregulatory solution brought out in this report parrots almost all the editions of Doing Business Reports since 2003 promoting private sector development and having influenced watering down of many regulatory policies across countries to facilitate rapid entry and development of the business.

This was eagerly executed by governments because labour regulations policies allegedly stifled exciting investments and swift economic growth. It is ironical that the same Bank, in its WDR 2013: Jobs, after extensive review on the link between labour regulation and employment [following a massive hue and cry from few governments, labour movements and ILO], had stated that this ‘link’ was non-existent. This obviously shows WDR 2019 disproves the exhaustive findings of WDR 2013!

Moreover, the Bank, during its previous Annual Meetings at Bali during October 2018 had introduced its new Environmental and Social Framework, where respect for workers’ rights in Bank’s projects was entered as Labour Safeguards [ESS2– Labour and Working Conditions]. Not less than two weeks later after the much appreciation for Bank’s new safeguard policy, came WDR 2019 in direct and stark contrasting opinions. This is highly contradictory and problematic from the Bank’s side sending two conflicting messages in two separate yet distinguished policy publications. 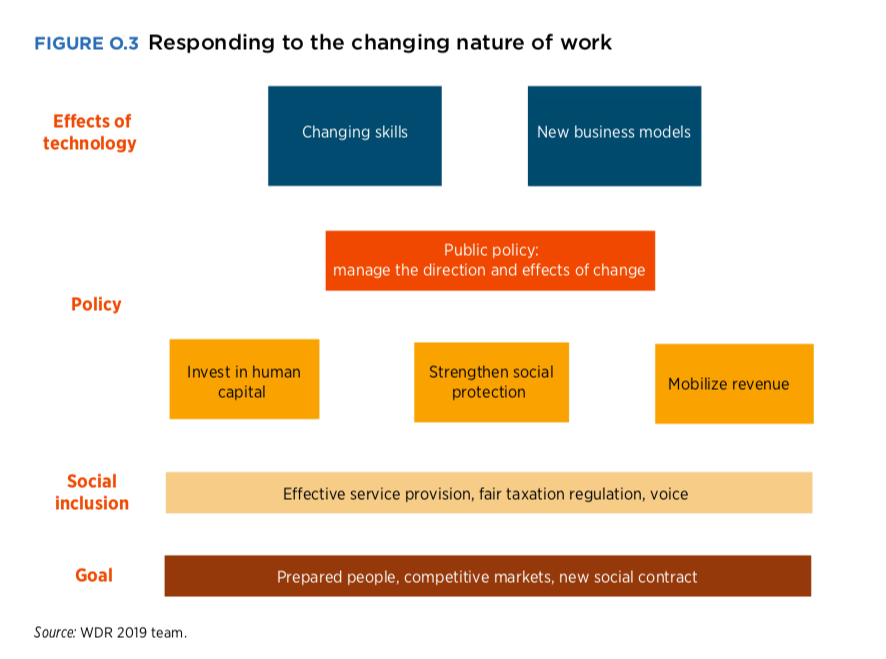 The world of work is progressing rapidly with technological and digital innovations including robots and Artificial Intelligence. Stable jobs are giving way to Gig- jobs and digital market places paved the way for platform market places and superstar firms. “Innovation will continue to accelerate” and there are growing chances, as already seen in many countries, that automation would replace the low-skilled redundant labour. Hence the jobs remaining outside automation would require highly skilled work-force that would have exceptional cognitive skills [logic, reasoning, critical thinking], socio-behavioural skills [teamwork, resilience, confidence, leadership] and skills of predictive adaptability [‘an individual now can have not many jobs but different careers in one lifetime’].

In order to feed into this need for a productive workforce, education and health must be critical for every child [starting from birth, especially until 5 years of age] and adult [adult learning outside the school and tertiary education. Therefore, the bank’s new Human Capital Project and Human Capital Index examines closely at this aspect of development and will recommend policy actions through country strategies. And what about those who fail to fall in the ‘formal’ and productive workforce, namely the informal workers? Well, they will be given social assistance [various forms of UBI, negative tax], social insurance and State will protect them with basic minimum, and if possible reskilling and upskilling initiatives would be undertaken].

All said, the gap of finances which then the State is faced with can be covered by mobilizing tax revenue – by imposing VAT, excise tax on tobacco, alcohol, sugar, etc. and by expanding the tax coverage base, along with further strengthening of global efforts of OECD and G-20 to agree together on preventing tax erosion and profit-shifting through tax havens.

It finally follows that the goal of social inclusion is achieved thus. Well, aren’t we all made happy … and all looks rosy!

A Few Disquieting Specifics from WDR 2019

Apart from the disguising semantics of WDR 2019’s storyline, here is a list of important suggested possibilities of what might not be well with a large number of us globally, if its recommended policy actions are adopted by governments:

Other General Global Concerns with WDR 2019

The following broad critique has been collated and arranged from all the sources given in this article, hyperlinked at various instances.

Longstanding observers of WDR over many years has recognised the emerging pattern of the Bank to move away from their adopting best practices to better learning by doing exercises. And that the Bank has been engaging in wider politics for better acceptance of their policy recommendations, including the “elite interests and ideologies; addressing collective action problems; building support for reform…legitimising a wider consensus”, for “pro-poor experimentation.”

The report has not just suggested eliminating the responsibility of social protection from the private sector and superstar firms, but altogether failed to address and recall the need of commitment from advanced nations to contribute in global development, by limiting the scope of the report to just low and middle-income economy experiments and discussions.

Much disappointing and worse is the fact that, here, human beings are pitted as human capital only, to be tailor-made for ‘productivity’. In the impatient race for economic growth and capital, the creativity of humanity, the plight of less privileged and marginalised, the ever-present resistances of people’s groups and movements, declining natural resources and accommodating other living beings, much less…the essence of life and living itself is non-existent in this ‘development’ report.