Recovery has fallen to 16.6% by the end of March 2022, meaning 83% of total debts of banks and other financial institutions have been lost in the process and liquidation of firms is very high at 77%

Everything that can go wrong is going wrong with the big-ticket “reform” Insolvency and Bankruptcy Code (IBC) of 2016, which was sold as the panacea for stressed asset resolutions (NPAs).

In August 2021, the Parliamentary Committee on Finance examined the IBC’s performance and expressed serious concerns about low recoveries and huge haircuts creditors took (90-95% haircuts in some cases), apart from long delays in disposal of cases. It told the government that the “fundamental aim of this statute is to secure creditor rights”, which it should do, and asked the government to fix a benchmark for the quantum of haircuts in line with global standards.

Nothing has changed since then.

On April 30, 2022, the IBC regulator Insolvency and Bankruptcy Board of India (IBBI) released its latest data for January-March 2022 quarter. The recovery from the “resolution” of cases (one of the outcomes of bankruptcy proceedings, the other is “liquidation”) had fallen to an all-time low of 10.2%. This means a haircut (loss of debts) of 90% in the said quarter. In the previous quarter of October-December 2021, the recovery was a little better at 13.4% (haircut or loss of 86.6% debts).

The earlier stressed asset resolution process which the IBC replaced, the Sick Industrial Companies (Special Provisions) Act of 1985 which provided the Industrial and Financial Reconstruction (BIFR) mechanism, was much maligned for low recoveries and evergreening bank loans. The IBBI had put the recovery under the BIFR at 25% (haircut of 75%). Most economists and policy experts have hailed the IBC as a historic “reform”.

There is ample evidence to show that the IBC has proved to be an unmitigated disaster–far worse than the BIFR it replaced.

The IBC process leads to two kinds of results – (i) “resolution” of bankruptcy cases in which firms are taken over by other firms, restructured and turned around and (ii) “liquidation” in which bankruptcy proceedings are ended in dissolution, sale as going concern or closed by compromise/arrangement.

“Resolution” is preferred as recovery is better and loss to the economy is much less. “Liquidation” yields are very low and in a large number of cases, firms are just shut down and sold as scrap. It is the “resolution” process that yielded 10.2% debt recovery (“admitted claims” of debts) in Q4 of FY22 mentioned earlier. For all the “resolution” results until March 2022, the total recovery since 2016 is 32.9%.

This seems flattering until “liquidation” results are added to it.

When liquidation cases, both closed and those in the process, are taken, then the “sale proceeds” from the first and the “liquidation value” from the second work out to be just 4.7% of “admitted claims” of debt.

Taken “resolution” and “liquidation” together, the total “admitted claims” until March 2022 was Rs 16.2 lakh crore and the total realisable/recovery was Rs 2.7 lakh crore. This is 16.6% of the debts and is much less than the much-maligned 25% under the BFIR.

The total loss of debts or haircuts is then a high 83.4%. This was what the Parliamentary Standing Committing was objecting to.

There is yet another big issue that has escaped wider attention.

The success of any stressed asset resolution lies in high “resolution”, not “liquidation”. The IBBI data shows the trend is distressing. Until March 2022, of 5,258 cases admitted for insolvency proceedings, 480 had led to “resolution” but a high 1,609 cases ended in “liquidation” – 77% of the total 2,089 cases resolved/closed.

Since “liquidation” leads to the closure of firms (loss of business, jobs and debts) or sale as going concern at liquidation value (extremely low values), this is an alarming situation and counter-productive for the economy.

A key to the right valuation of companies undergoing IBC proceedings is to report its dubious transactions in the past (before bankruptcy proceedings) to divert funds and alienate assets of such companies, called “avoidance transactions”. Resolution professionals identify and reverse such transactions to recover diverted funds or alienated assets.

The IBBI’s April 30, 2022 report highlighted the problem too. It showed that resolution professionals had filed 777 applications about the past dubious transactions (“avoidance transactions”) worth Rs 2.2 lakh crore. Of this, only 71 applications had been disposed of, involving a mere Rs 15,106 crore (6.8%) of recoverable value. But only Rs 49 crore (0.3% of Rs 15,106 crore) was actually recovered. In the case of a prominent builder, 758 acres of land, out of a total of 858 acres, “was given back” to it (undergoing bankruptcy process). This 858-acre land was valued at Rs 5,500 crore.

Delays of every conceivable nature

One is delayed admission of applications for insolvency proceedings. Against a statutory limit of 14 days to admit or reject such applications, the average time taken was 468 days in FY21, which went up to 650 days in FY22.

Apart from the delay caused by verification and contestation from the debtors, the IBBI says operational creditors also provide inadequate information/documents to establish the transactions and the default while filing for bankruptcy proceedings, affecting proceedings.

Then there is a significant difference in valuations of firms during the insolvency processes and the appointment of a third valuer.

All this has led to delays in disposing of cases. The IBC mandates that cases should be disposed of (resolved) within 180 days. But the IBBI data shows, that until March 2022, only 12% of cases were closed within 180 days. In fact, the bulk of the cases, 66%, took more than 270 days.

This delay was the other major issue that the Parliamentary Standing Committee had flagged last year and sought measures to improve it. But that is clearly not the case.

The entire IBC of 2016 needs a thorough review and an overhaul to improve its efficiency and recovery. That would require sincere efforts. But if the past is any indication, this is not to be expected.

Recall former RBI Governor Urjit Patel resigning and then explaining why he did so in his 2020 book, Overdraft: Saving the Indian Saver. He revealed that the government was diluting the IBC by weakening the RBI’s regulatory powers and many of its ministers were calling for insolvency resolution outside the IBC ambit.

Low recovery is a burden on banks and other financial institutions but a gain for the private businesses, whereby hangs another distressing tale for another time. 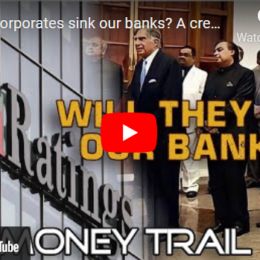 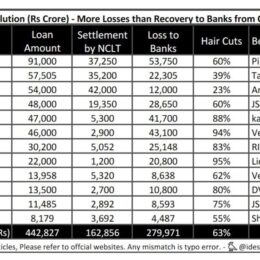