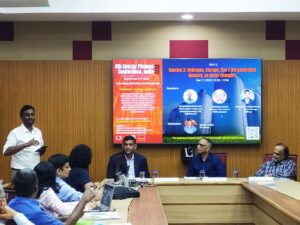 “India should have the national ambition of achieving net zero by 2047 at 100 years of Independence and in time to restrict global warming to 1.5 degrees,” said Ajay Shankar, Distinguished Fellow, The Energy and Resources Institute (TERI), in his keynote address at the 4th annual Energy Finance Conference India jointly organized by the Centre for Financial Accountability, Indo-German Center for Sustainability at the Indian Institute of Technology, Madras and Climate Trends.

He added, “Even if we don’t achieve this, it will accelerate our transition to becoming a globally competitive green manufacturing economy – we could probably achieve it and afford it. There is a paradigm shift in terms of technologies and costs.”

The Conference was held at IIT-Madras on December 6-7, 2022, and attended by academics, think tanks, industry representatives, sectoral experts, students, and activists. The discussions were held around India’s energy landscape, public and private players in the energy sector, financing models, challenges in the ESG Framework, Hydrogen Storage, 2nd/3rd Generation Biofuels and Planning Financial Models for Climate Resilience in the Transport sector.

“The rapidly changing landscape of the energy sector in India has called for a debate discussing the country’s energy requirements, the financial requirements funding the sector, the public/ private investments, and the challenges hounding the energy sector. We cannot make a mere technocratic transition without considering the implications on people, resources and ecology. Moreover, we cannot make a transition without the necessary finance. All this needs to be done in the background of the unfolding geopolitical scenario and the political economy.” said Joe Athialy, Executive Director, the Centre for Financial Accountability.

CFA and Climate Trends’ recently released an analysis on the finance flows for coal vs renewables which showed that for the first time in 4 years of tracking, 100% of the value of the project finance loans identified in 2021 went to renewable energy projects. This is a considerable increase compared to 2020, where renewable energy loans accounted for 74%.

There is growing confidence amongst financiers to invest in renewable projects rather than conventional thermal projects, given their risks. However, to achieve Net Zero by 2070, India would need an estimated 10 trillion USD. “As the Chair of the G20, India can push the G7 to expand MDB lending for climate finance,” added Utkarsh Patel, Associate Fellow, Climate Change and Energy Transition, CSEP.

Ajay Shankar concluded that “India tends to underestimate its own ability to achieve the major transition. Around 2002-03, IEA reports said we have the largest number of people on the planet without electricity access and will achieve 100% electrification between 2040-2050. In 2005, India launched a national programme for rural electrification, and we achieved 100% electrification, much before projections. This should give us the confidence to achieve the energy transition.”

This article was originally published in Krishi Jagran can be read here.